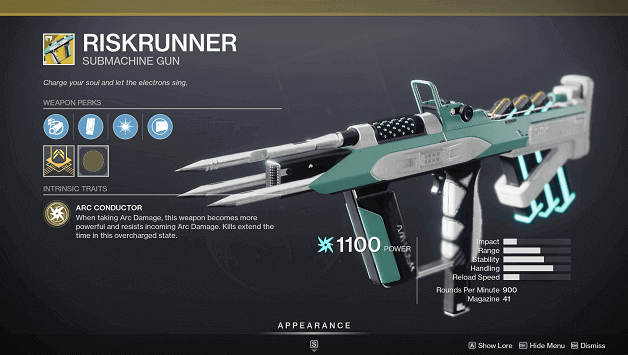 Charge your soul and let the electrons sing.

The Riskrunner is a shocking Exotic Submachine Gun that is one of the first weapons new players acquire in Destiny 2.

This Exotic Submachine Gun fires up to 900 rounds per second with a magazine size of 41 rounds before needing to reload.

Nothing beats a group of enemies like a huge volley of rounds that shock them with chain lighting, which is exactly what the Riskrunner does.

Riskrunner is perhaps the first Exotic Weapon that new players obtain as it is a reward for the “A Spark of Hope” quest obtained during its steps.

It is obtained while you follow a tremendous source of power that the Warlocks have detected which leads you to a stash that contains the weapon.

The “A Spark of Hope” quest is one of the earliest missions that you will be completing as you start after the Beyond Light update.

The Riskrunner has a lightly vented barrel.

TheRiskrunner has a larger magazine size but slower reload speed.

When Arc Conductor is active, shots fired have the chance to become chain lightning and return ammo.

The Riskrunner is easier to hold and aim.

Thanks to Arc Conductor, you can be resistant to Arc Damage and make use of any enemies dealing it to you to overcharge Riskrunner.

Additionally, when Arc Conductor is active, the Superconductor trait becomes active, which causes your shots fired to have a chain lightning effect and return ammo.

How to Get Riskrunner Catalyst?

The Riskrunner Catalyst increses the Riskrunner’s range by 27, which allows it to hit enemies from a further distance.

You will obtain the Riskrunner Catalyst during the “A Spark of Hope” quest, where you obtain the weapon in the first place.

The Riskrunner is perfect for facing enemies that can cause Arc Damage, which will continuously empower the Exotic Submachine Gun and protect you from the said damage.

With Arc Conductor, it becomes easier to kill enemies and the Superconductor trait allows you to destroy groups effortlessly.

Alone the Riskrunner is already a powerful weapon but with its special traits, this weapon can allow you to easily clear enemies in your way.