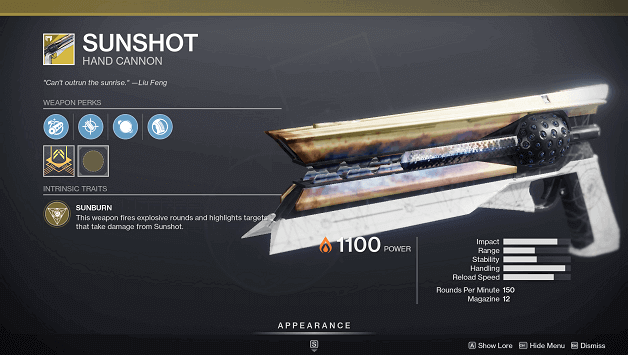 The Sunshot is an explosive Exotic Hand cannon that appears to incinerate enemies just like the sun would, thus giving it the name.

This Exotic Hand Cannon is capable of firing up to 150 rounds per minute and has a magazine capacity that holds 12 rounds.

Sunshot is known for its ability to fire explosive rounds and for causing enemies to explode when they are killed.

How To Get Sunshot?

Sunshot was originally a reward that you could choose from the Sacrilege campaign mission but now that it is no longer available through such means it has a different acquisition process.

You may obtain Sunshot from Exotic Engrams that can be a reward from enemies or on missions as well as purchase it from Xur if he is selling it.

Sunrise is equipped with a stable barrel attachment.

The friction on Sunshot’s grip is particularly strong.

Sunshot fires explosive rounds and highlights targets that take damage from Sunshot, allowing you to deal damage to multiple enemies.

Enemies killed by Sunshot’s rounds or the explosive damage will trigger Sun Blast, causing them to explode in Solar energy.

Being able to kill multiple enemies with explosive damage will make it easier to clear out large groups in seconds.

How to Get Sunshot Catalyst?

Sunshot Catalyst increases Sunshot’s range by 27 as well as its stability by 18, making it capable of hitting targets from afar as well as making it easier to aim at enemies.

This will allow you to have more accurate hits, mostly being able to get more precision hits with a more stable aim.

With the added range you can take out groups of enemies from afar with the Sunshot’s explosive rounds as well as its Sun Blast trait.

You can get the Sunshot Catalyst in Strikes or when participating in the Crucible and can unlock it by defeating 500 enemies with Sunshot and 1000 enemies with its Sun Blast explosion.

Sunshot on its own is already powerful, being able to fire powerful rounds that are explosive, making it great for taking out multiple enemies.

The Sun Blast trait makes the weapon even better because of the Solar explosions that it turns enemies into.

Getting the Sunshot Catalyst is a good addition as the increase in the range makes this Exotic Hand Cannon more effective, being able to be used at further distances.