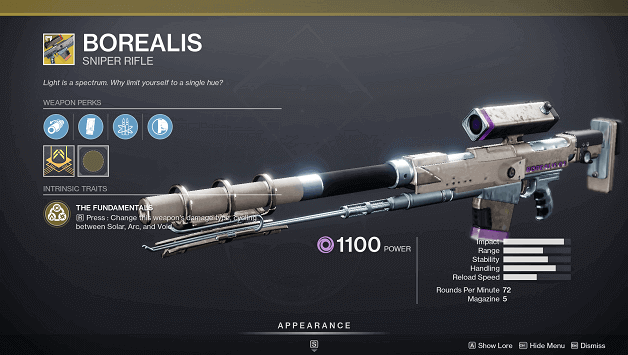 Light is a spectrum. Why limit yourself to a single hue?

Borealis is a powerful Exotic Sniper Rifle that has the ability to sweet between damage types for different effects when attacking enemies.

This Exotic Sniper Rifle is capable of firing 72 rounds per minute with a magazine that holds 5 rounds before reloading.

Borealis is capable of reloading rounds from its reserves when you break enemy shields and using supers grants extra damage when your Super destroys a matching shield energy type.

How To Get Borealis?

You may obtain Borealis from the following sources:

has a balanced barrel.

has a greatly increased magazine size but reloads much slower.

Breaking an enemy shield transfers one bullet from reserves. Breaking a combatant shield or the shield of a Guardian using a Super with that shield’s energy type grants bonus damage for the rest of the magazine.

The  is optimized for recoil control

The Fundamentals allow you to change the damage type of Borealis by pressing reload, cycling between Solar, Arc, and Void.

Being able to select the damage type that Borealis deals with will allow you to make use of the damage type’s effects as well as deal more damage against certain enemies.

How to Get Borealis Catalyst?

The Borealis Increases the reload speed of the Exotic Sniper Rifle by 18, allowing you to reload faster after your magazine has been depleted.

The faster you can reload, the sooner you can start firing rounds at enemies, making it easier to deal more damage per second in a small amount of time.

You can get the Borealis Catalyst by defeating non-Guardian enemies anywhere in the systems which drop by chance.

Unlocking the Borealis Catalyst after obtaining it requires that you defeat 150 enemies with Borealis using all of the damage types. (Arc, Solar, Voids)

Borealis is great for dealing specific types of damage to enemies and provides a lot of advantages if you know which one to use for each enemy.

You can also make use of the damage-type effects for certain reactions when you fire at enemies but breaking shields is one of its best abilities.

With the right tactics, you can easily break enemy shields and kill enemies without the need to reload by making use of its ability to reload ammo from reserves.