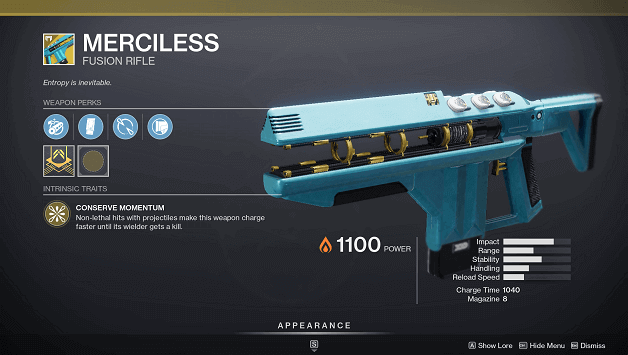 Merciless is an versatile Exotic Fusion Rifle that is capable of unleashing a volley of rounds repeatedly at faster speeds until an enemy is killed.

This weapon has a charge time of 1040 and has a magazine size that holds 8 rounds before the Exotic Fusion Rifle needs to be reloaded.

A useful effect of Merciless is that it gains a boost in damage when reloaded after recently killing an enemy.

How To Get Merciless?

You may obtain Merciless from the following sources:

Merciless has a stable barrel attachment.

This weapon has a greatly increased magazine size but reloads much slower.

Reloading immediately after a kill increases weapon damage for a short time.

When you deal non-lethal hits with a projectile from Merciless, the Exotic Fusion Rifle charges faster until its wielder gets a kill.

This allows you to fire faster shots until an enemy is killed, allowing you to deal continuous damage to enemies until you kill them.

You can use this in unison with the Impetus perk which gives you an increase in weapon damage for a short time when reloading after a kill.

How to Get Merciless Catalyst?

The Merciless Catalyst increases the Exotic Fusion Rifle’s range and stability, allowing it to shoot further with better handling.

Since handling will be much better, this will benefit Merciless as its fire rate increases until an enemy is killed, allowing you to deal with accurate shots.

The bonus range will allow you to pick off enemies from a further distance while retaining the bonuses from this weapons perks and intrinsic trait.

You can get the Merciless Catalyst by completing Strikes on either Heroic or Nightfall difficulty.

The upgrade from the Merciless Catalyst is unlocked by defeat 500 enemies using the Exotic Fusion Rifle.

Merciless is one of those weapons that you use to pound enemies over and over again until you have destroyed them.

The ability to continuously fire rounds with a high rate of fire makes the weapon deadly and combining it with the Impetus trait makes it even deadlier.

You will be unleashing ammo until enemies die and reload for a damage boost, only to repeat spraying enemies with projectiles again, and so on.