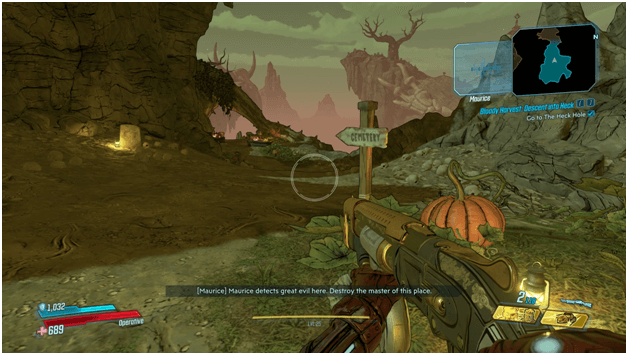 Bloody Harvest has begun and you are now able to search for the mysterious saurian Maurice who will give you missions regarding the mysterious ghosts and other realm.

You are to find Maurice and collect Hecktoplasm that he will use to open a portal for you which leads to The Heck Hole where you are to kill the source of the ghosts. 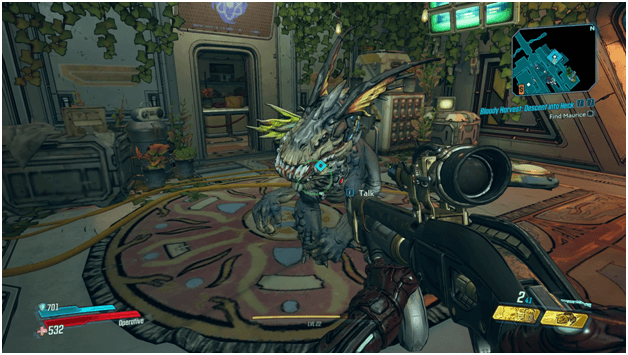 Maurice is located on the same floor that Tannis is on, across the gap which can easily be spotted within Sanctuary.

Once you get close to Maurice, a waypoint will show his location, showing that he is nearby. 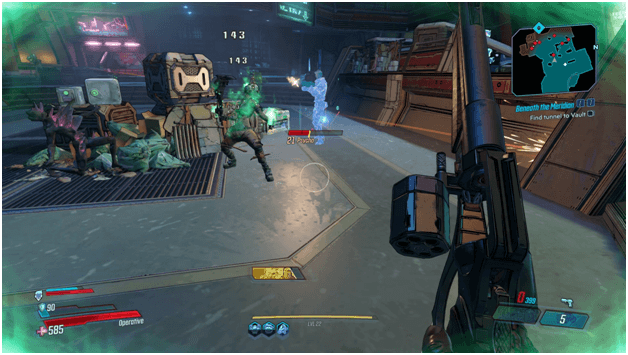 To collect Hecktoplasm, you will need to kill enemies who are possessed with ghosts which are shown by having a glow about them.

Once you kill the enemies, the ghost that is possessing them will be released which you must shoot to force it to drop Hecktoplasm.

An easy way to collect hecktoplasm would be to go to a lower area such as Athenas and fight through the area, clearing several enemies within a small amount of time and collecting a lot of hecktoplasm. 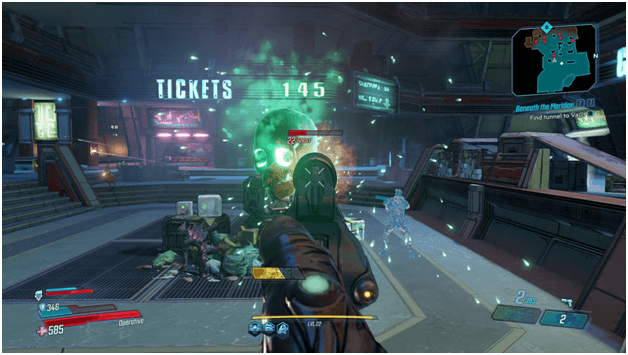 Enemies will usually be possessed by regular ghosts who are distinguished by their greenish glow and will unleash a ghost in the form of a skull of that color. 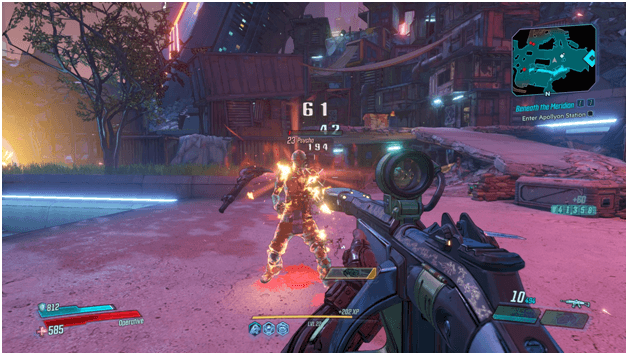 Some enemies may be possessed with a badass ghost which is symbolized by the enemy having a red aura.

Badass ghosts can possess both badass and regular enemies so watch out for the glow that they have. 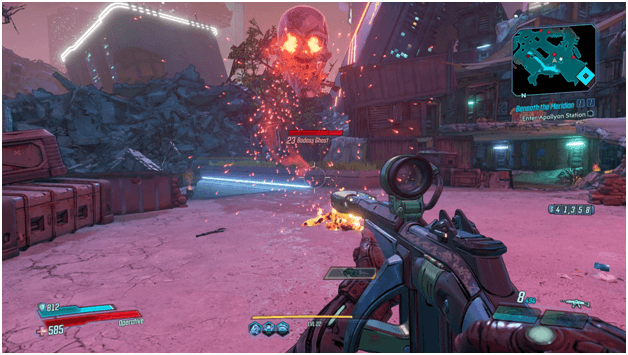 Killing an enemy possessed by a badass ghost will release a red skull which will be even more aggressive than the normal ghost which can shoot projectiles at you.

Allowing ghosts to get too close to you will inflict you with fear, causing you to be terrified which may have both negative and positive effects depending on the gear you have equipped. 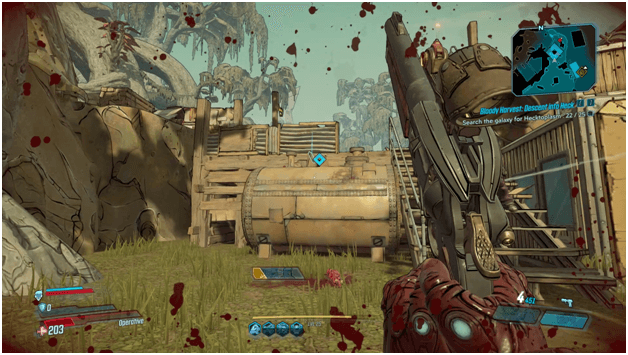 Once a ghost is released, shoot at it to destroy it and force it to drop hecktoplasm which you will need a total of 25 for the Bloody Harvest: Descent Into Heck mission.

Give The Hecktoplasm To Maurice 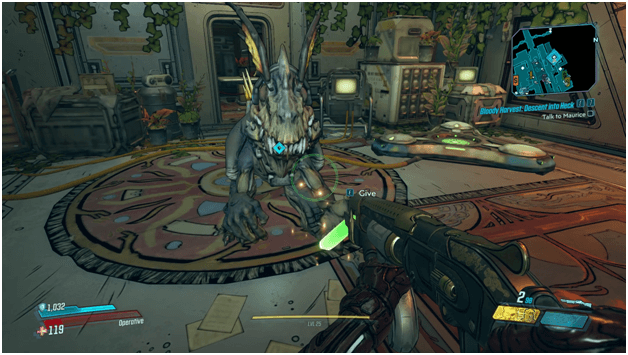 After collecting 25 hecktoplasm, head back to sanctuary and give it to Maurice so that he can open up a portal for you leading to The Heck Hole. 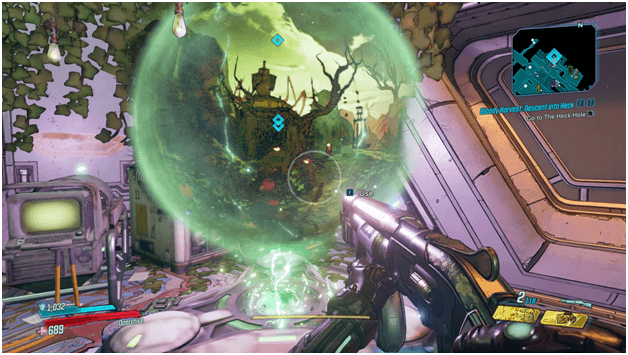 Head into the portal to enter The Heck Hole where you will then search for the source of what is releasing the ghosts.

The Search For Captain Haunt 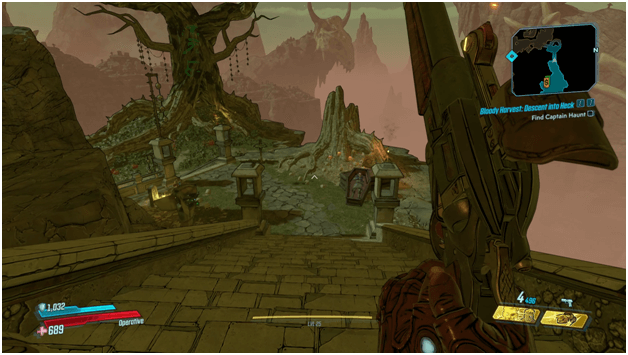 Make your way towards the waypoint on your hunt for Captain Haunt which will take you through a few gateways before you reach the end. 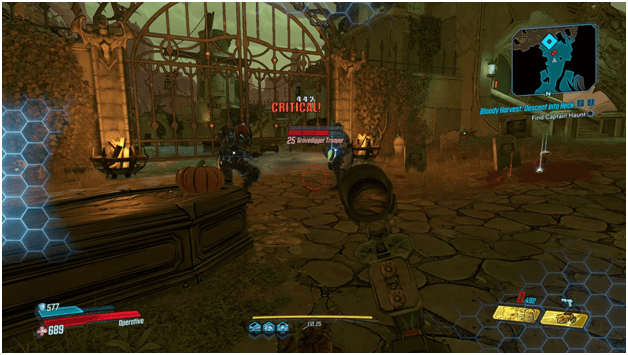 Fight your way through the forces that spawn out of the graves and that are wandering the area until you reach gates. 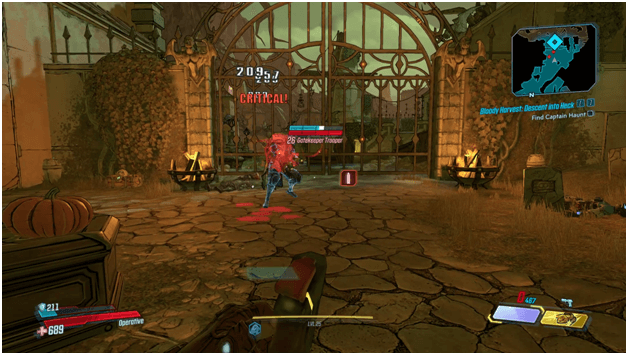 Gates will usually have a badass enemy which are known to be gatekeepers which need to be killed in order to proceed to the next areas.

You will run into 2 gatekeepers during the mission and can expect some anointed loot from them as well. 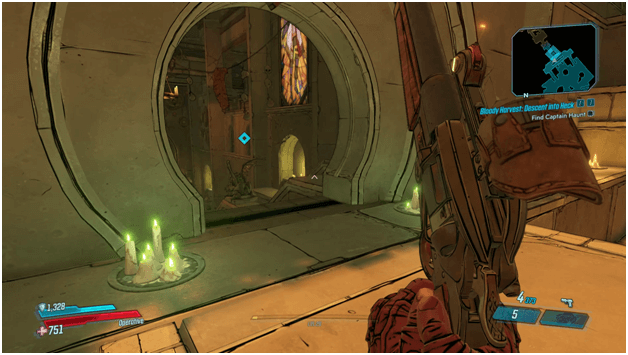 Make your way towards the waypoint which will lead you to into an area where you will soon be attacked by ratch. 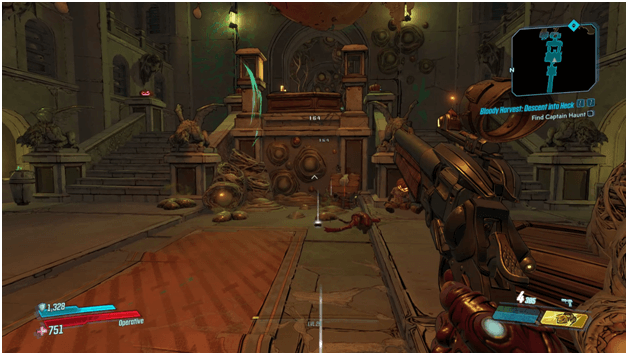 You may notice some pumpkins with a different colored glow which are settled above the stairs which is actually related to a puzzle just in the next room. 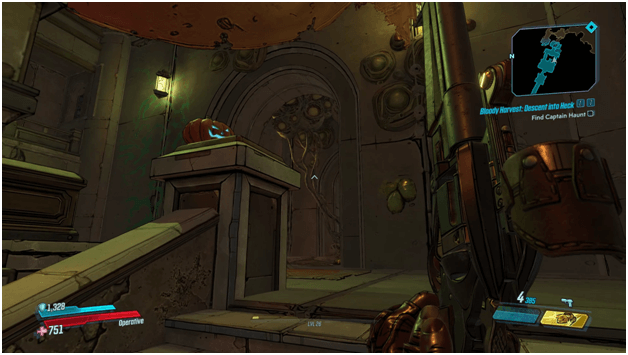 From when you enter the room, memorize what colors the pumpkins are in and take note of the pattern. 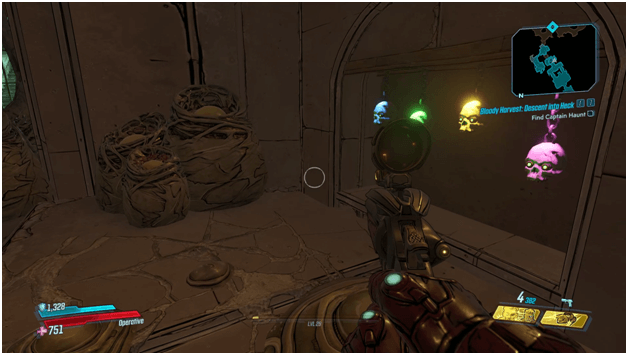 You will then pull the skulls in the order that you saw the pumpkins earlier which will unlock a secret room that has loot in it. 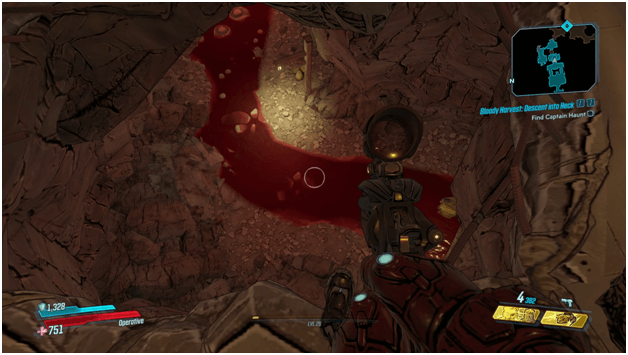 Make your way down the hole which will lead you into the Clotting Cavern which will be filled with several ratch that attack you. 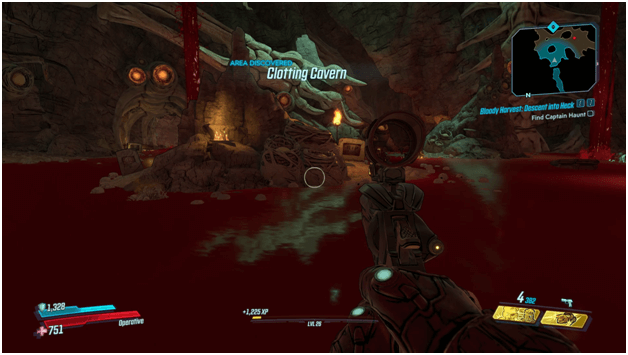 Kill the ratch that you encounter and proceed towards the waypoint which will take you closer to Captain Haunt. 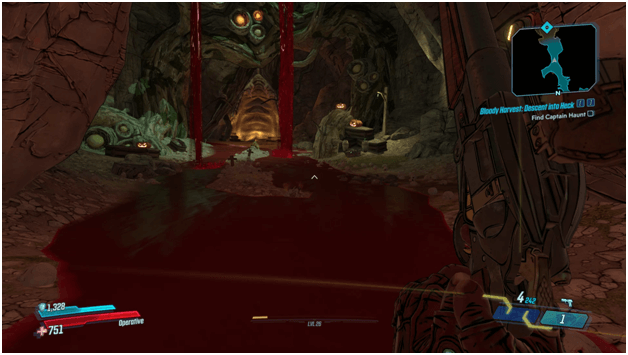 Keep heading towards the waypoint and you will find yourself at a descent which will be where you will face and need to kill Captain Haunt. 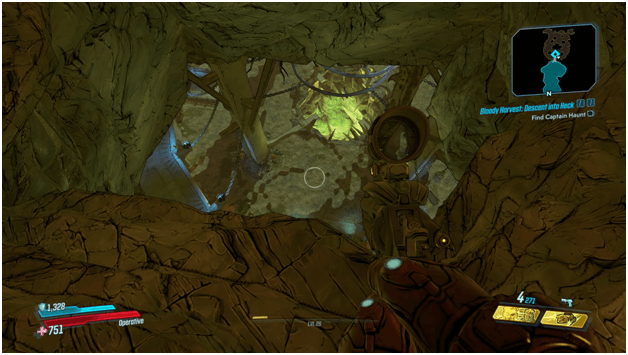 Jump down the whole and be prepared for a fight as Captain Haunt will be waiting for you and will be quite a challenge if you are not prepared. 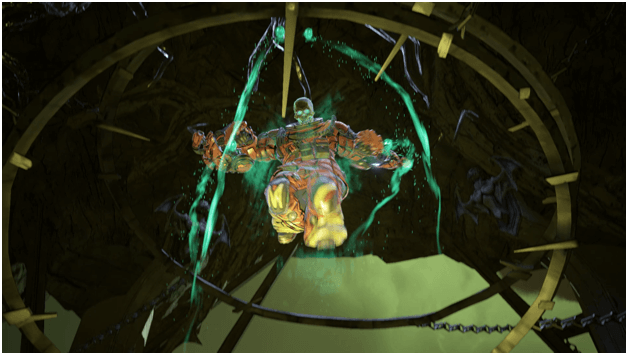 A quick cutscene will play where Captain Haunt emerges from a hole and soon after, you will fight him along with other enemies. 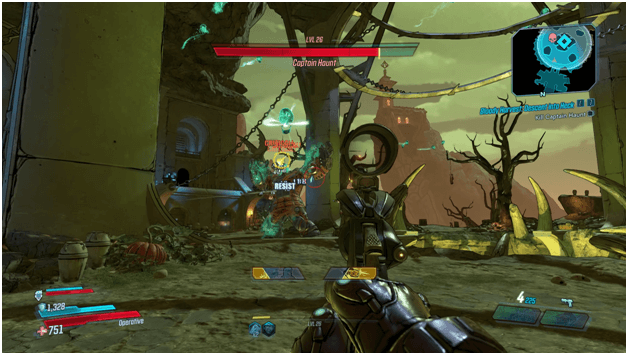 Kill Captain Haunt and loot what you can from him before making your way back to Sanctuary. 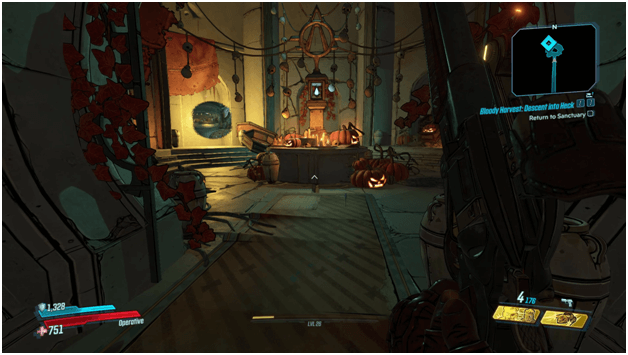 Head towards the waypoint which will lead you to a portal that will take you back to Sanctuary. 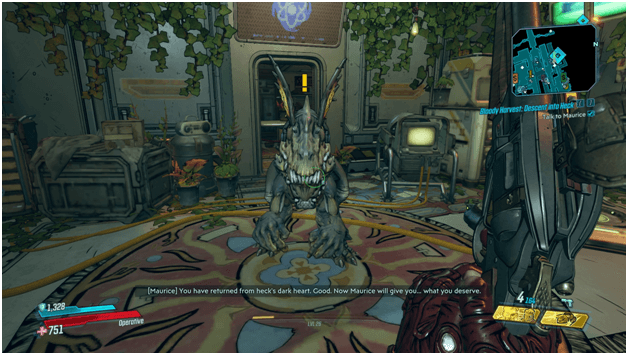 Once you are back in Sanctuary, talk to Maurice to complete the mission which will grant you rewards and make another mission available. 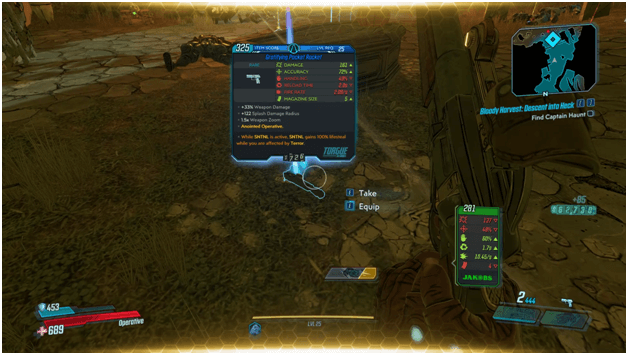 There will be special loot which are related to the event by granting you special benefits when you are affected with Terror.

Some of the gear that you can find can be quite expensive when sold and there are a few vending machines where you can sell them for a bit of cash. 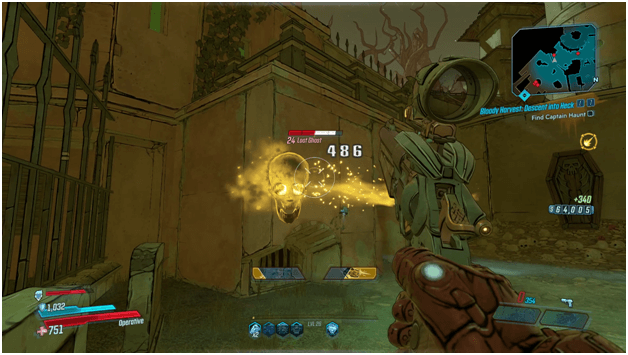 Chances for a loot ghost to spawn are good which is similar to other loot enemies in the game which can drop some pretty good gear and a decent amount of cash. 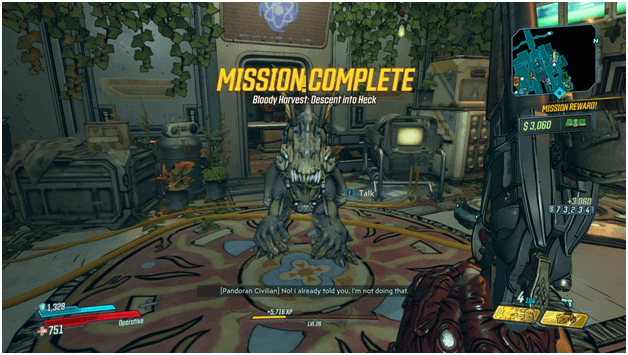 After completing the mission, Maurice will give you a large amount of cash.

You will also be able to now repeatedly do the Bloody Harvest: The Rebloodening mission which is basically the same mission but repeatable. 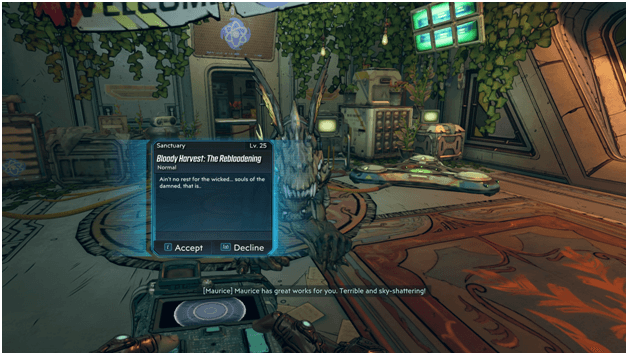 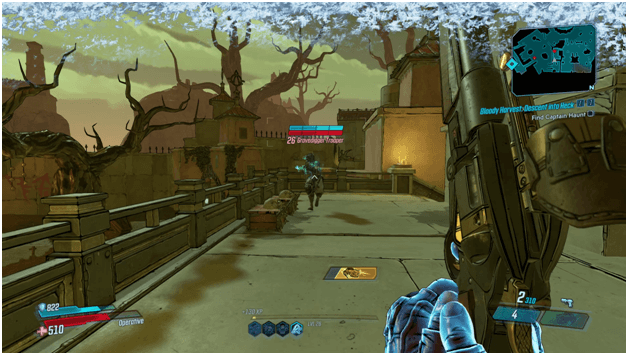