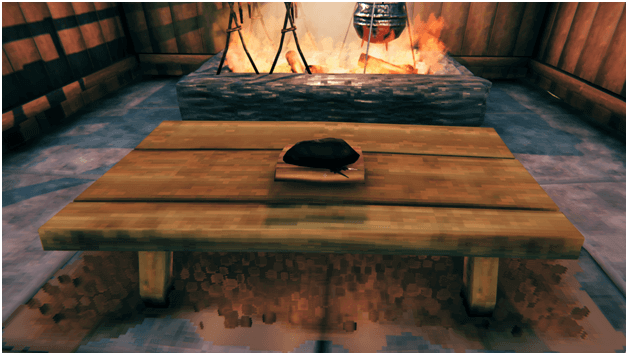 A famous dish in Viking history may sound like a nasty dish; Blood Pudding actually provides some of the best food buffs in Valheim.

Blood Pudding is one of the late-game food items that can be cooked in Valheim, which focuses on providing a substantial amount of health and a moderate amount of stamina.

Each Blood Pudding has a weight of 1.0 and stacks up to 10 pieces in your inventory making one whole stack add up to 10 weight.

Blood Pudding mainly provides the highest health buff in Valheim and allows the player to regenerate health at a fast rate.

Thistle can be farmed by searching for it in the Swamp and picking it up from the ground, providing you with one piece per plant.

For a more advanced look into collecting Thistle, check out our Valheim Thistle Farming Guide.

Bloodbag is a loot item that is dropped when you kill Leeches which can be found swimming in the water in the Swamp biome.

If you are looking for more detail into getting Bloodbags, you can learn more in our Valheim Bloodbags Farming Guide.

Barley Flour is an ingredient processed in the Windmill that requires Barley that can be found in the Fuling settlements in the Plains biome and farmed.

To learn more about Barley Flour, check out our guide on How To Make Barley Flour in Valheim.

How To Cook Blood Pudding?

The Blood Pudding Recipe can be crafted once you have acquired Thistle, Bloodbag, and Barley Flour and is cooked in the Cauldron.

You will need to have a Windmill to process the Barley Flour from Barley which requires you to have crafted an Artisan Table, unlocked after defeating Moder (Fourth Boss).

Most players will find that Blood Pudding provides the highest amount of health in Valheim, making it one of the best foods for players who prefer higher health over stamina.

Having a large base amount of health such as that which is provided by Blood Pudding allows players to take more damage and survive better against poison status effects.

Players may reach over 250 health by combining Blood Pudding and other food items, providing them with fatty health and better survivability against stronger enemy attacks.