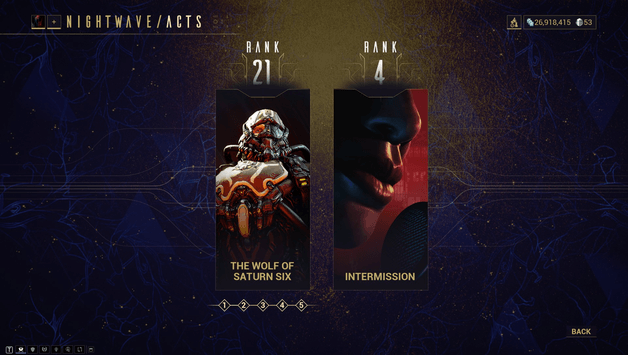 Nightwave is a radio station that came as an event during the release of “The Wolf of Saturn Six” where player where to do several tasks in order to gain points while going through a mini-story line involving “The Wolf” which brought many rewards for their hard work.

During the events of Nigthwave, Nora, who is on the radio will frequently broadcast about you and your achievements when you finish tasks and earn points.

This event has become somewhat part of the story and at seldom times, Nora would talk about many things such as Warframe lore and the deeds the Tenno has done in relation to the quests given.

After The Wolf of Saturn Six finished all rankings were reset and players were to begin with a new act known as “Intermission” where they would go through similar tasks in order to earn points for rewards.

The Nighwave acts last for a for a limited amount of time which usually last around a certain amount of weeks.

Nightwave Intermission began on June 12, 2019 and will end on July 5, 2019 which will result in the ending of the acquisition of standing as well as the reset of the ranking of the players once a new Nightwave act begins.

Players who participate in Nightwave will not only gain standing to have an increase in rank, but will eventually acquire Nora Credits as rewards which may be used to purchase special items from the Nightwave offerings. 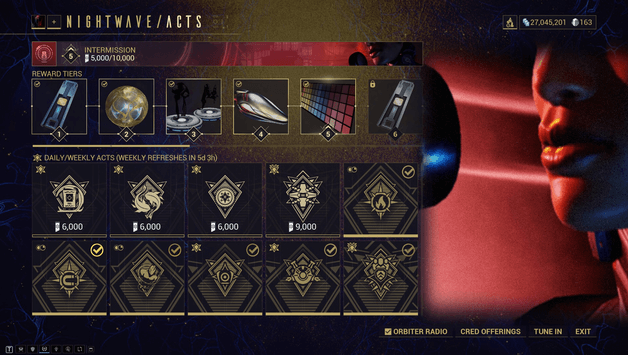 Your Nightwave ranking or rewards tier is a way to see which rewards you have obtained as well as how much standing you are required to gain to be able to obtain further rewards during the Nightwave acts.

Here you can also see the certain daily and weekly acts that you may complete in order to acquire standing which will progress you to higher tiers to earn better rewards.

The daily and weekly acts, as given by their name, reset daily and weekly at a specific time tied with Warframe which players may monitor and make use of to time their activities efficiently in order to complete the tasks. 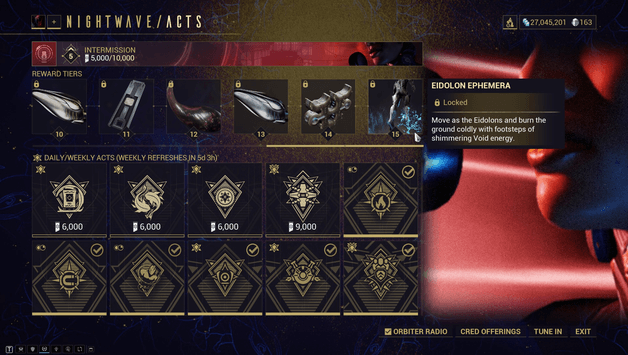 Nightwave Intermission ends on tier 15 which is acquired through several gaining of standing and progressing through several acts which may easily be done by the players.

The further you head into the acts, the greater the rewards will be and it is advised to take up the challenges as these are mostly limited offers and may not occur again in the future.

Most of these items can be obtained but doing the acts makes acquiring them much easier as well as reaching the final tiers rewards prizes that are not so easy to get or that may not be available later on.

The following are the rewards for Nightwave Intermission

How To Get Standing Nightwave Standing? 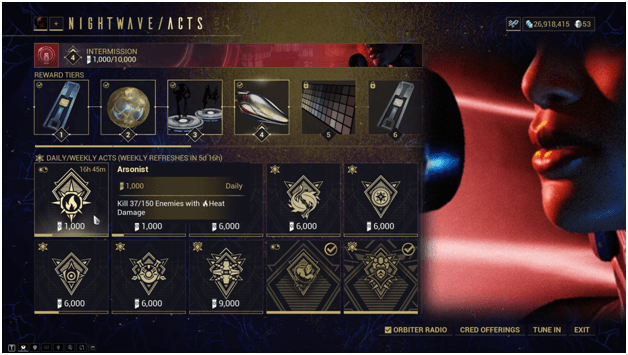 To acquire standing for Nightwave, you simply need to do the daily and weekly challenges that can be seen in the Nightwave menu.

Simply hover your mouse over a task to see what you are required to do and prepare to do the challenge.

It is possible to complete multiple of these tasks at the same time depending on what they are and what you need to do.

Some tasks may be completed over several missions and checking for the specific details will ensure you can complete as many as you can as efficiently as possible.

Above we have the Arsonist challenge which requires you to “Kill 37/150 enemies with Heat Damage” to do this you may use a weapon that is equipped with heat mods or a Warframe that has Heat abilities. 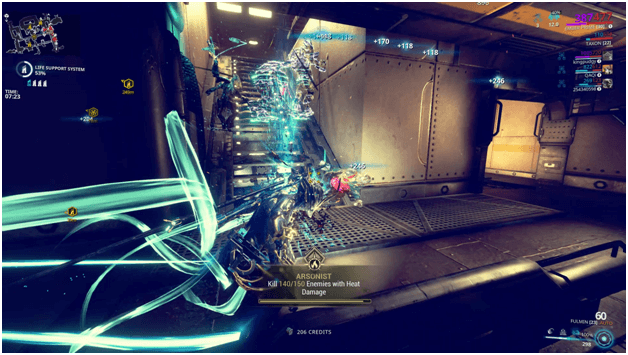 Simple play through a mission while doing what the objective of the challenge is and you will occasionally be updated through the mission or missions if it takes more than one run to accomplish the task.

You will be able to view your progress every time a crucial count or part of the task is completed. 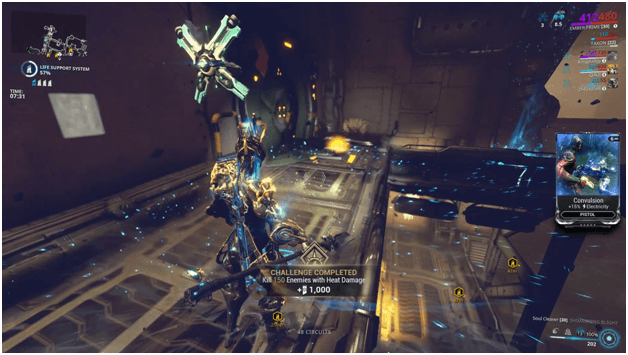 Upon completion of the task you will see it appear as an update saying the challenge is completed which means that it is finished and you have acquired the standing already.

Simply finish the mission or exit and check to see your standing later on for the total amount you have and for more challenges to increase your standing.

There will be many challenges for you to do and it is advisable to do as many as you can within a day and aim to complete both the weekly and daily challenges in order to progress further in able to acquire the Nightwave rewards as soon as possible.

The faster you complete these tasks makes you progress faster and earn more rewards as well as Nora Credits to use for purchasing for the offerings menus. 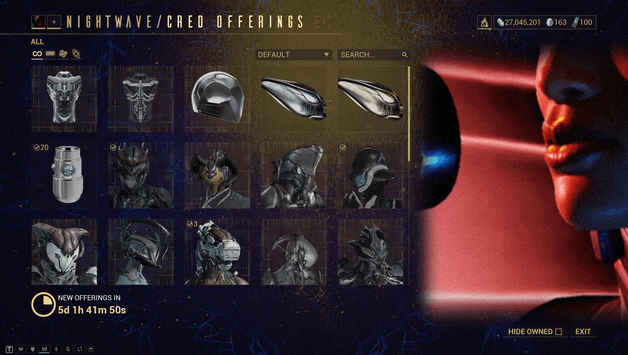 Upon opening the offerings menu, you will be able to view a large list of items you may purchase that includes items for upgrading your equipment, rare materials, Warframe cosmetics and much more.

These may be purchased using specific Credits earned from the Nightwave events after reaching specific tiers or ranks.

These items change every 7 days that go by and provide you a wide selection of items you would like to purchase using the Credits that you have accumulated.

The total amount of Credits you have for the current Nightwave may be seen on the upper right part of your screen following after platinum. 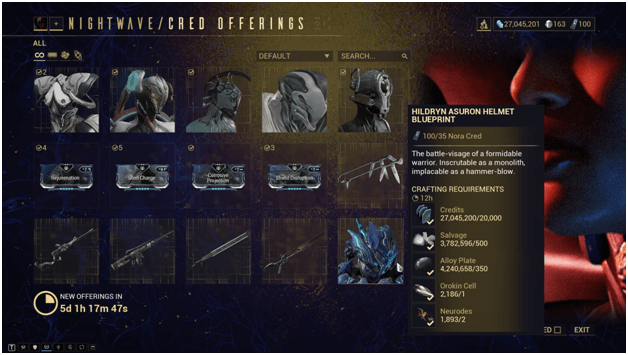 To purchase an Item simply left click on it to be brought to the purchase screen where you will need to confirm it to complete your purchase. 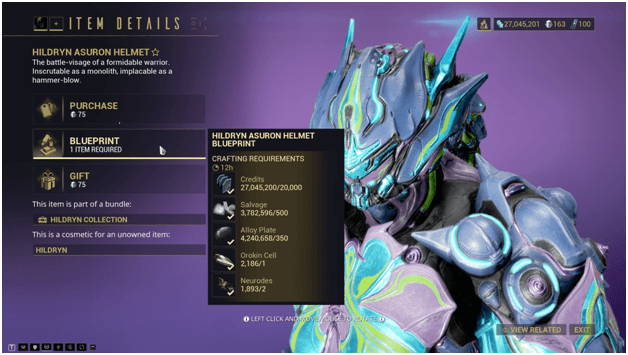 It has come to a point where some players are confused as it brings them to a screen where they are seen options to purchase with platinum.

Simply hover over to purchase blueprint or whichever selection does not specify a price for platinum to be able to purchase it with your credits you have for the specific Nightwave act. 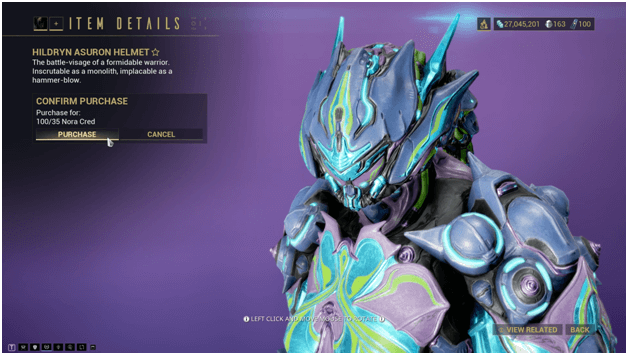 A confirmation screen will appear and you will be able to see the cost and how much credits you have for the purchase.

Click purchase to proceed to buy the current item that you have selected. 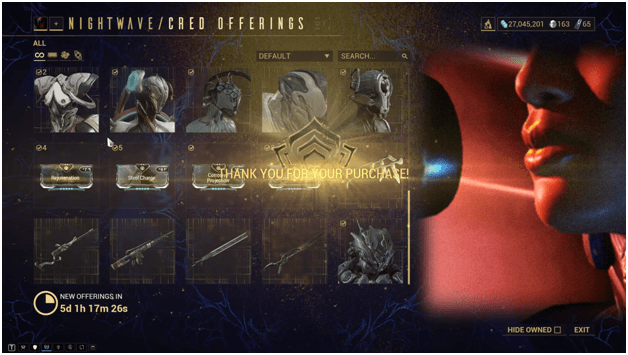 Once you have confirmed your purchase you will be brought back to the offerings screen and see a message confirming your purchase is complete.

You will either find the item in your inventory or in the foundry depending on what you bought and what you are to do with it. 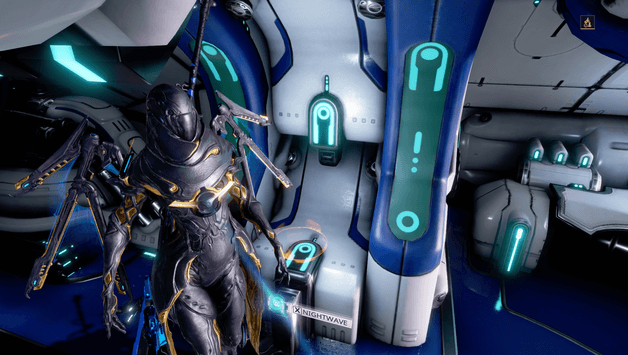 Nightwave is a great way for players to have fun and pass the time while earning rewards doing the given tasks.

Being able to purchase and earn many items that could not be easily obtained in the games comes easy with the new Nightwave acts.

The fastest way to get Nightwave standing is to try to accomplish as many acts possible and even doing them all in one day as well as finishing the weekly challenge to reduce amount of challenges to just be the daily ones through the remainder of the week.

Saving Nora credits is ok but be sure to spend them before the event ends to avoid losing them such as what happened with “The Wolf Of Saturn Six” event.