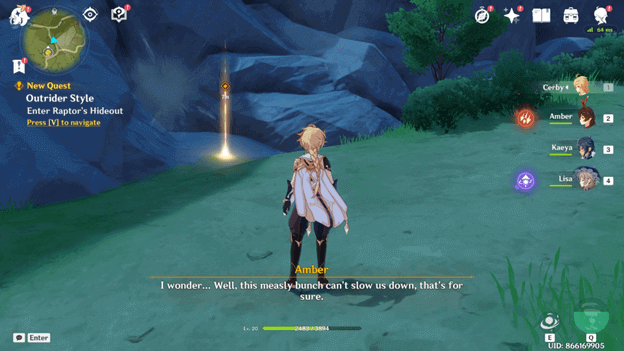 As you were previously following Raptor’s trail, you were led to his hideout where the elemental traces seem to have disappeared.

It looks like he is now cornered and Amber is eager to chase him down and catch him once and for all before he finds a way to escape.

During this quest you will enter a domain called The Reward for Courage is Flight, where you track down and capture Raptor.

How To Get Outrider Style Quest?

The Outrider Style quest is started once you have completed the quest called They Call Him Raptor which continues your pursuit of the criminal. 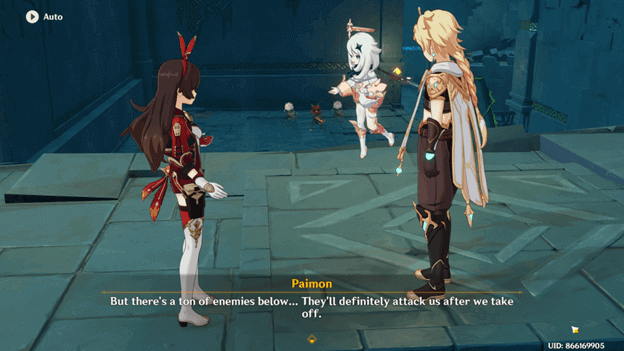 As you enter Raptor’s hideout, Amber will mention that the only way to catch up is if you glide through the area.

Amber decides to make this your final stage of your gliding exam as a consideration of the challenge that lies ahead.

In order to glide across the area, you will need to drop bombs on the enemies to guarantee your safety which becomes available in this domain.

To evade the enemy attacks, you will need to remain airborne using your glider as well as the wind currents to stay in the air while dropping bombs.

As you are gliding, there will be a large circle indicating the blast zone of your bombs, which you can use to aim and time when you drop them.

You will need to drop bombs on enemies to clear them out while gliding to proceed with the next area in the domain.

After the first area is cleared, you will need to fly toward and go through the rings to get boosted to the next area where there is a wind current.

Keep making your way and you will find yourself in another area with more enemies that you need to defeat while gliding.

After you clear out the enemies, you will land and will need to go through the door, which loads the game for a bit and brings you to another area. 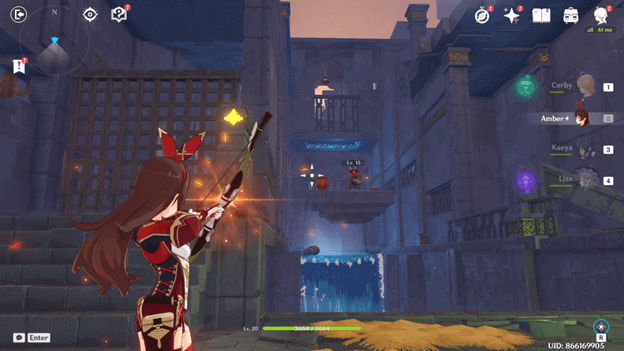 Continue making your way through the area by following the waypoints, which requires that you glide down and get through a gate.

The gate can be opened by defeating the Hilichurl nearby and you can easily do this by shooting one of the explosive barrels.

Once the gate has been opened, continue making your way up the stairs and follow the waypoint which will lead you to a room with a switch underwater.

You will first need to deactivate the electrical system by shooting the sources using Amber (charged shots) as they are Electro mechanisms.

The water will drain once the system has been disabled and you will be able to interact with the switch to open the door leading to the next area.

In the next area, you will find a large room with another switch but to remove its barrier, you will need to defeat all the enemies nearby.

After defeating the enemies, you will need to continue making your way towards the waypoint and will stumble upon another switch guarded by enemies.

You will need to defeat the enemies to open the door and you will be able to glide through rings to reach the next area.

4) Glide Over the Chasm

Once you reach the end of the area, a cutscene will play where Raptor taunts Amber, convincing her she won’t be able to glide across.

Amber trusts her instincts instead and decides to make the jump by believing in herself and you will need to glide over the gap regardless.

At the end where it seems you will fall, there will be a wind current under which will boost you up to reach the edge. 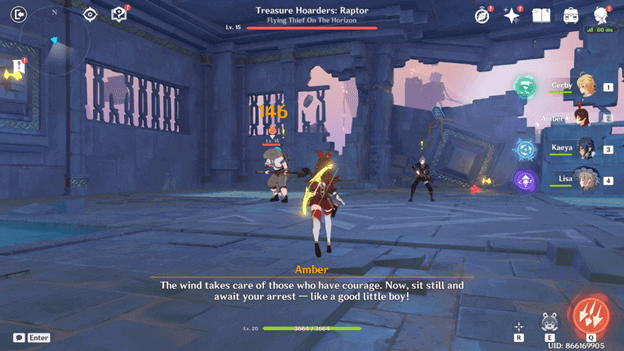 5) Track Down Raptor and Arrest Him!

Once you reach the door near the edge, you will need to go inside and defeat all the enemies in the area, who will this time be Raptor and his Treasure Hoarders.

Defeat all of them and afterward, a cutscene will play where Amber makes the arrest, putting an end to Raptor’s schemes.

A dialogue with Amber will begin where she explains how Raptor was trying to trick her to stop her from pursuing him.

Amber tells you to head back to the city and meet her and finally this time she will be able to give you your gliding license.

7) Go to the Cathedral to Get Your Gliding License

Amber will be inside the cathedral in Mondstadt and you will need to go inside and speak with her to get your gliding license.

As you enter the cathedral, you will see Amber at the end and will need to approach her, which will start a dialogue between the two of you.

She will congratulate you and give you your gliding license and complete the Outrider Style quest.

After you have completed the Outrider Style quest, you will receive Adventure EXP, Mora, and other rewards. 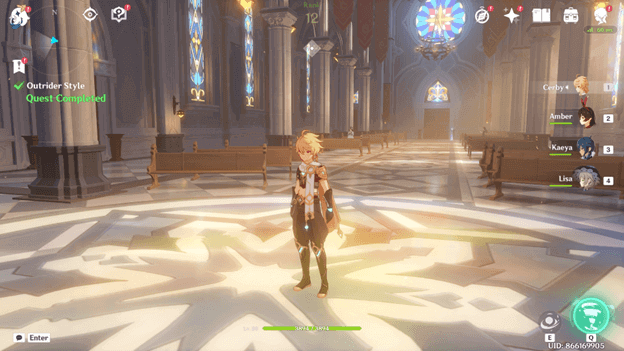 While things may have taken quite a turn during your gliding exams, it looks like in the end you were finally able to get your gliding license.

Amber has shown a lot of dedication when it comes to pursuing the law and along with your help, Raptor has finally been caught.

Now that you have your gliding license, you are free to glide without any problems but Amber still tells you to make sure you don’t get it revoked. (which does not happen)