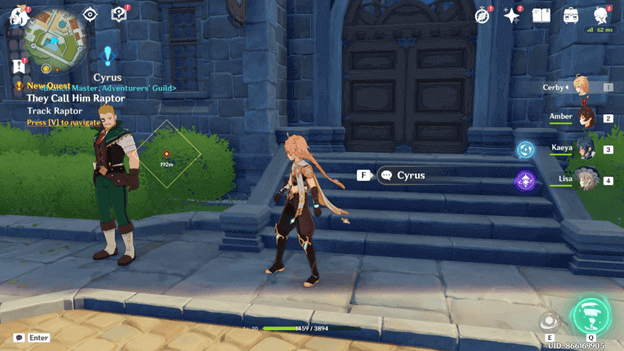 As you were completing your Gliding Exam with Amber, you were interrupted by Otto, one of the Knights of the Favonius as he thought you might be a criminal.

It appears that someone called Raptor has been gliding around and they have been trying to apprehend him with bait.

During this quest you’ll be stepping in on this task and will need to track Raptor down as he has taken the bait and ran off.

How To Get They Call Him Raptor Quest?

You’ll get the They Call Him Raptor quest by once the Mondstadt Glider quest abruptly ends. This happens since Otto halts you during your exam as he suspected you were with Raptor but Amber rushes in to explain otherwise.

They Call Him Raptor Quest Objectives 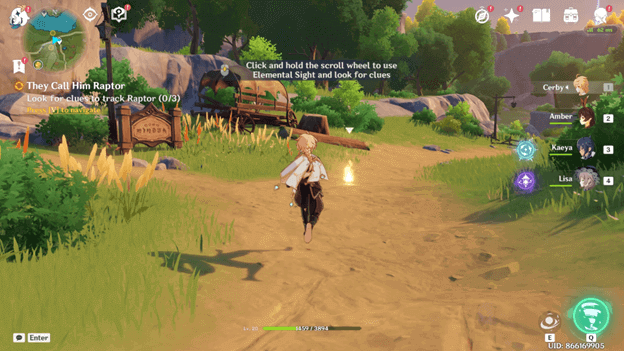 Once you start this quest, you need to find the whereabouts of Raptor which can be found near Springvale where Amber is waiting for you.

You can easily get to the location by using a Teleport Waypoint located nearby.

2) Look for Clues to Track Raptor

As you reach the waypoint, a cutscene will play where Amber tells you that there may be clues about Raptor nearby.

During this part of the quest, Paimon will discuss the Elemental Sight which you can use to find clues regarding Raptor.

You will need to head to each of the marked locations to locate the different clues which will give a hint about what happened to Raptor.

Once you reach the third clue, there will be an Elemental Mark found and you will instead hear a strange sound up ahead.

3) Investigate the Strange Sound Up Ahead

As you head to the origin of the strange sound, you will see a person being attacked by two Hilichurls.

Once you have defeated the Hilichurls you will be able to talk to the person, who is later known as Farrah for any information they have about what happened.

Head over and speak to Farrah and a cutscene begins, where Farrah tells you that Hilichurls attacked her cart as they were riled up by Raptor’s landing.

It is now discovered that Raptor came by the area and now you are back on track with hunting him down.

After the cutscene, you need to continue looking for Raptor and not far from Farrah, a group of people will suddenly appear as you approach the quest waypoint. 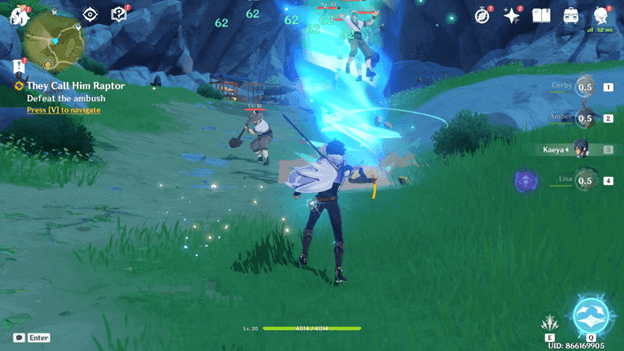 The group of people will begin to attack, and you will need to defeat them so that you can continue the search for Raptor.

7) Look for the Marks Left by Raptor

Continue following the waypoint and it will lead you to a nearby location which is where the elemental traces will have disappeared.

After following the marks left by Raptor, you will find out the elemental power was worn off which would make it easy for Raptor to escape.

It will appear that Raptor has hidden himself in a nearby domain and the quest will end at this point.

They Call Him Raptor Rewards

After you have completed They Call Him Raptor quest, you will receive Adventure EXP, Mora and other rewards. 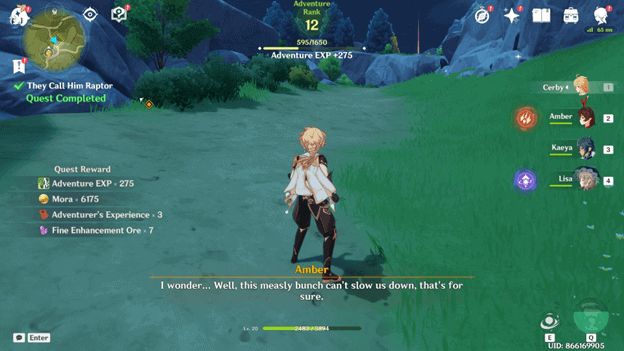 After tracing the path that Raptor has taken, it appears that he has landed and began to run off to a nearby domain.

Amber, relentless as ever, continues with the pursuit to capture and prevent Raptor from being able to escape.

The quest ends near the domain where Raptor has hidden, and this will set you off next to chasing him through whatever lies within.