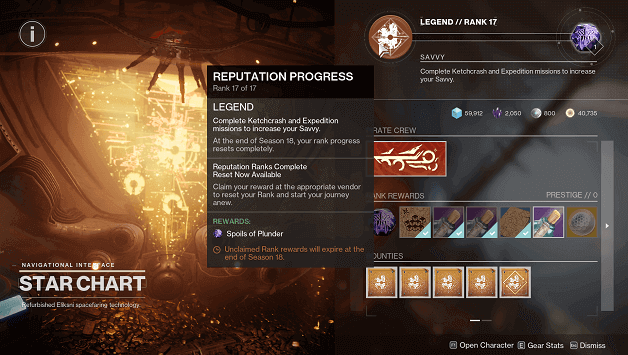 There is always something new to do in Destiny 2 and with the introduction of Season of Plunder, there are even more rewards that can be earned.

The Star Chart offers a ton of goodies with rank rewards as you gain more reputation, which in Season of Plunder is done by increasing your Savvy.

Gaining Savvy will increase your Reputation Rank, allowing you to claim rewards that give you seasonal gear rewards and much more.

Savvy are points that can be earned as you participate in Season of Plunder activities, which in return will increase your reputation rank.

There will be a set number of points needed to reach each rank, which reaches up to Rank 17, and afterward, no more will be gained until it is reset.

Depending on what activities you do, the amount of Savvy you acquire will be different, and more convenient than others.

How To Increase Savvy? 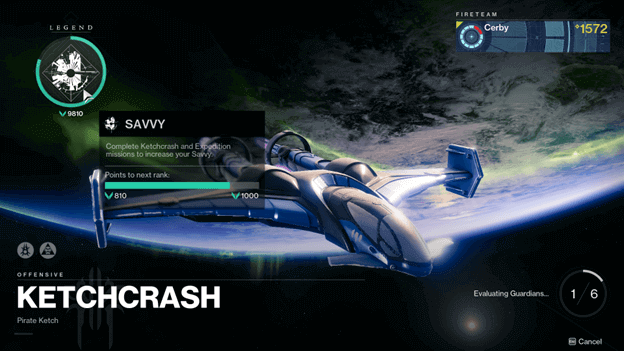 Savvy can be increased in two different ways as of now, which are to participate in Ketchcrash or Expedition missions.

Some players will choose one over another based on how fast it is to complete them while others will prefer to farm Savvy while also getting more rewards.

The Ketchcrash mission puts players on a Ketch across The Reef where they will be under attack by crews that serve under Emaris.

In this mission, you will need to defend your Ketch while also turning the tide by attacking the pirate’s ketch by boarding them.

This can take a bit of time as different tasks are at one point randomized, mixing things up for players which can take some getting used to.

Completing a Ketchcrash mission will earn you 240 Savvy.

The Expedition missions are considered to be quicker by most and there are more rewards at the end but you will need a Treasure Map first to fully make the most out of it.

This means that you will have to do Ketchcrash missions first because without a Treasure Map equipped in the Captain’s Atlas, you only get 60 Savvy while having one gives 210.

Expedition mission puts you one a location where you will locate buried treasure, dig it up and haul it back to your extraction point.

For every few ranks that you gain, you will be able to acquire rewards by claiming them from the Star Chart. Resetting your rank to 1 (must be Rank 17) will allow you to gain Savvy again to level up your rank to get even more different rewards after.

Resetting your rank can only be done once you have reached Rank 17 and beyond this rank, you will get no more Savvy until the reset is done.

More rewards will be gained once your rank has been reset and you can do this to get more goodies, especially an Exotic Engram.

The Boastful Crew upgrade under the Navigator section in Pirate Crew allows you to earn more Savvy when completing Season of Plunder activities.

To unlock this upgrade, you must first have 11 upgrades previously unlocked across any of the Pirate Crew sections.

The best way to level up your rank in Season of Plunder would be to focus on doing Ketchcrash missions to collect materials for Treasure Maps and doing Expeditions after.

Expeditions are easier since all you need to do is dig and haul, which can be done in a small amount of time.

It is a good idea to farm Treasure Coordinates first by doing activities and then doing Ketchcrash missions for Map Fragments before spending them all on Treasure Maps.