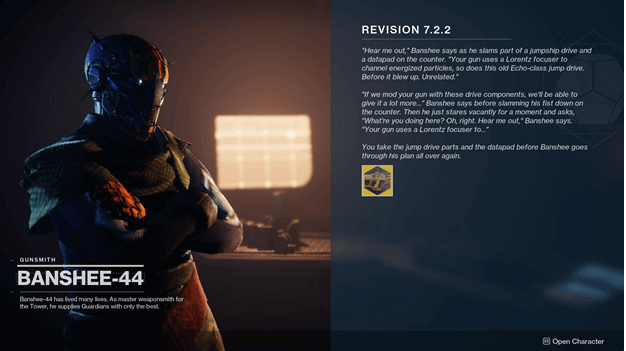 When Season of the Lost came out, it included the seasonal Exotic Weapon, the Lorentz, an Exotic Linear Fusion Rifle, and Banshee-44 has a way for you to improve it.

The Revision 7.2.2 quest is meant to hone your skills with the Lorentz Driver and to further upgrade it to perform even better.

Banshee-44 starts talking about how you can use jump drive parts and a datapad which you later on quickly take before he keeps repeating himself.

During this quest, you will need to perform a certain task and participate in activities using the Lorentz Driver to unlock its catalyst. 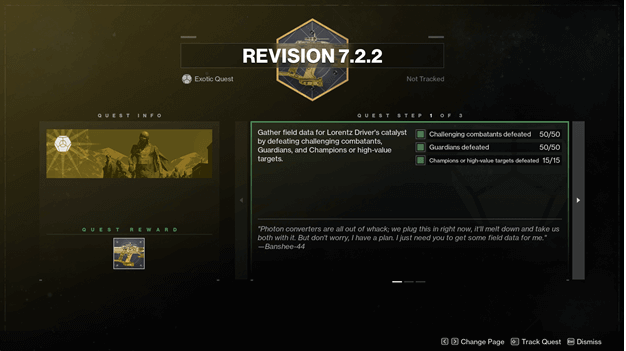 The first step in this quest is for you to defeat certain combatants and even Guardians, combatants will be easy to deal with but you will need to do Crucible or Gambit for Guardians.

It is advisable to do Crucible for Guardians since Gambit doesn’t offer a lot of player vs player action.

The second step the Revision 7.2.2 quest is a bit more specific when it comes to defeating targets, require you to participate in activities and defeat a certain number of targets.

Calibration data is generated when you complete an activity, giving roughly about 4 every time you finish one.

Defeating combatants can be finished quickly by participating in Crucible, providing you with 2 points per kill.

Step 3: Return to Banshee-44 to Receive the Calibrated Catalyst

After you have completed the previous steps, you may now head back to Banshee-44 and he will reward you with the Lorentz Driver Catalyst.