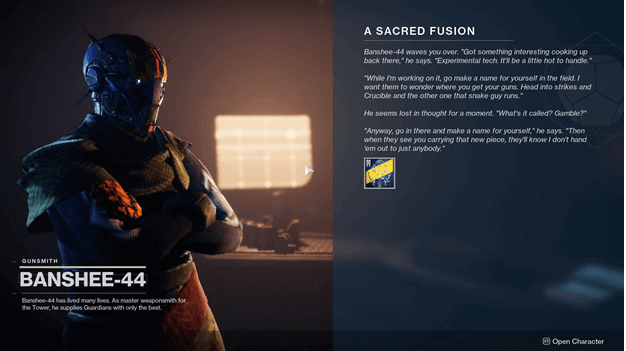 A Sacred Fusion is a quest that allows you to obtain a Legendary Fusion Rifle from Banshee-44 after doing a small task for him.

While this task does not do much for him, it is more about you building your reputation by participating in activities such as Crucible and Gambit.

Banshee-44 insists you make a name for yourself, that way others will know that he doesn’t give weapons out to just anybody.

How To Start a Sacred Fusion?

A Sacred Fusion was introduced when Season of the Splicer came out and can still be finished later on with newer players.

You simply have to head over to Banshee-44 and it will be amongst the different quests that pop up one after the other.

Select the quest when it appears and it will be added to your current lists of quests, allowing you to also track it and view the steps.

Banshee-44 can be found in the Tower near the other NPCs. 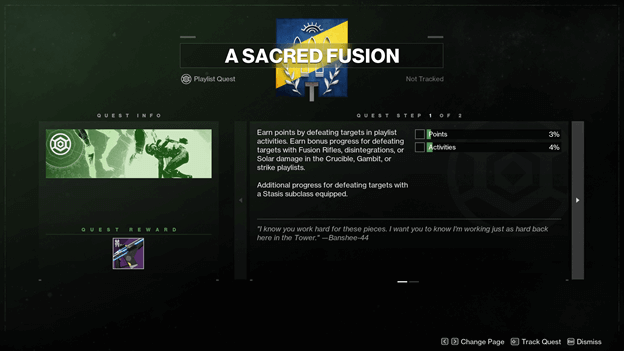 The main goal of the quest is for you to make a name for yourself so that Banshee-44 will give you one of his latest weapons.

To do this you will need to participate in  Crucible, Gambit, and Strike playlists, which will allow you to gain points and completion of this step.

You will need to earn 8500 points (measured in percentage)  and reach 100% with activities, which can be sped up if you do the following:

More progress is made if you are equipped with a Stasis subclass.

Step 2: Return to the Tower and Speak with Banshee-44

Head over to the Tower and speak with Banshee-44 and he will reward you with the Null Composure, a legendary Fusion Rifle.