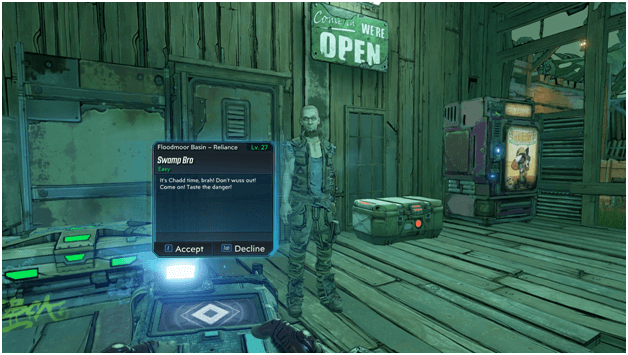 A stunt enthusiast name Chad needs your help in doing some new stunts and has asked you to go accompany him as he does them.

Your mission is to help Chad do some badass stunts which will take things to an all new extreme level as he answers the call of danger. 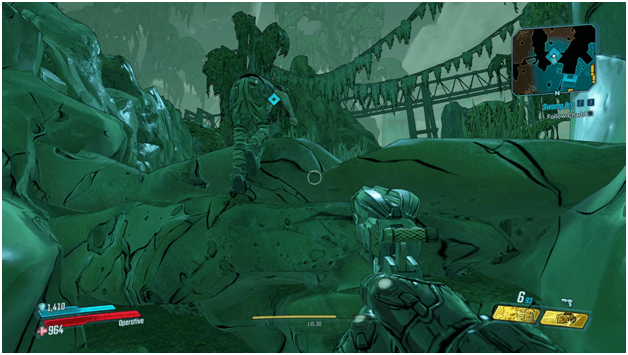 Chad wants to do a first stunt called Saurian Boxing which the title pretty much explains that he will go head on with saurians unarmed.

To attract the saurians, he is going to need your help killing grogs so that he can rub their slime all over himself as he claims that saurians love munching on them. 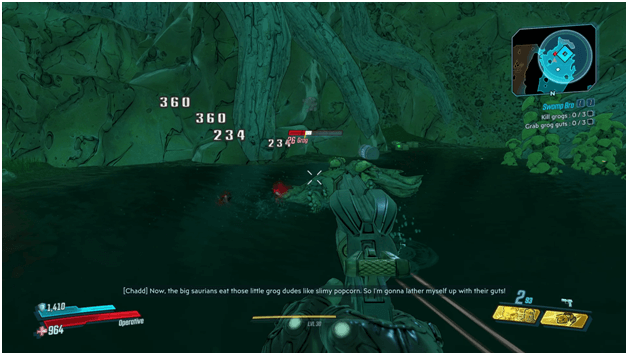 Go around the small area marked by the waypoint and kill a bunch of grogs so they drop grog guts which you need to collect. 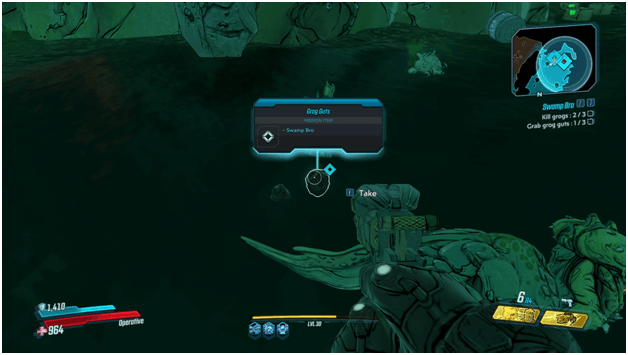 Collect 3 grog guts and bring them back to Chad so he can smother himself in it to attract the saurians. 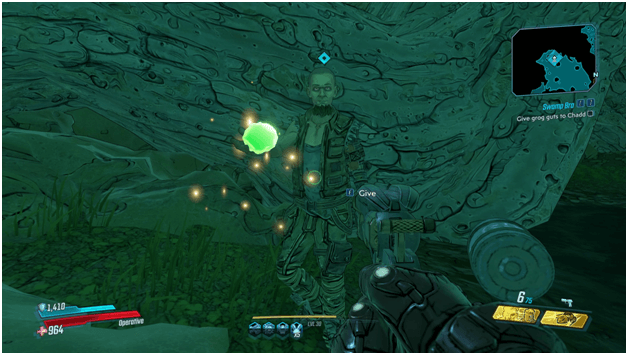 Go to Chad and hand over the grog guts that you have collected and wait for him to apply it to himself as if he was putting on lotion. 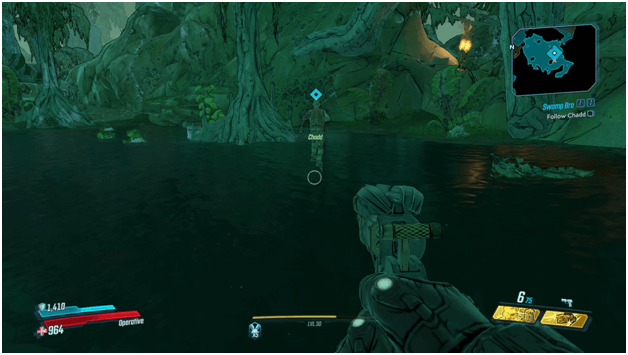 Once Chad is done lubricating himself with grog guts, follow him to the saurian nest where the Saurian Boxing will take place. 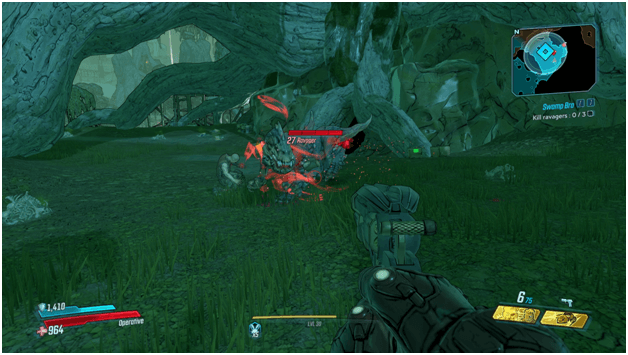 The moment the saurians appear, Chad will instantly be knocked down and will be out for the count but still be pretty stoked about his stunt. 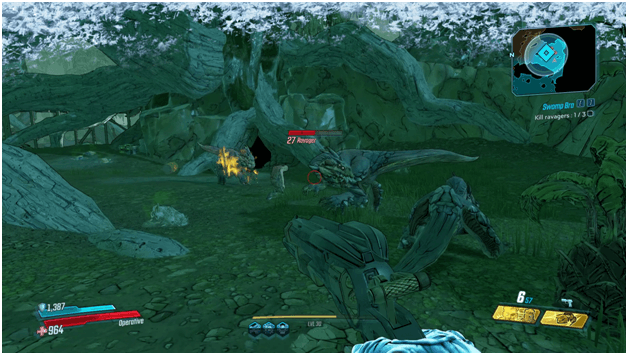 Kill the saurian in the area to help Chad finish his somewhat failed stunt so that you can move on to the next stunt. 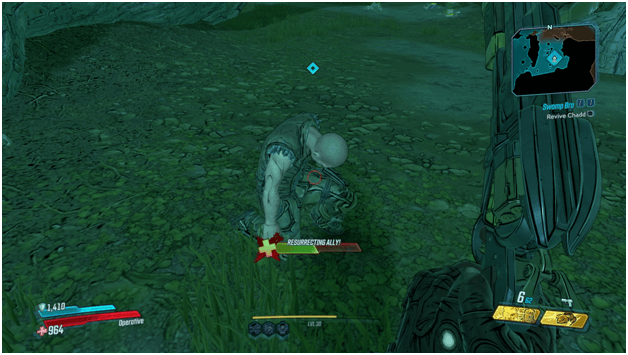 After clearing all the saurians, go to Chad and revive him so he can proceed to his next extreme stunt. 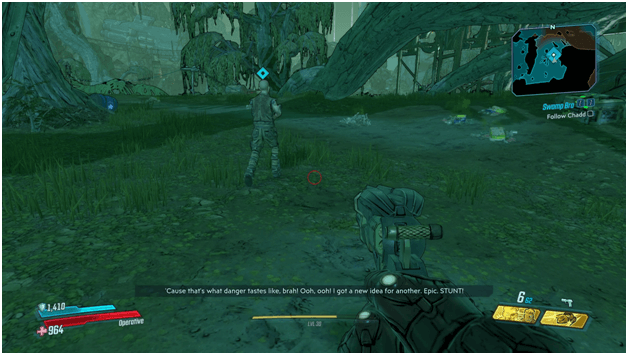 Follow chad again as he heads back near Reliance to plan out his next stunt which you will apparently be dragged along with. 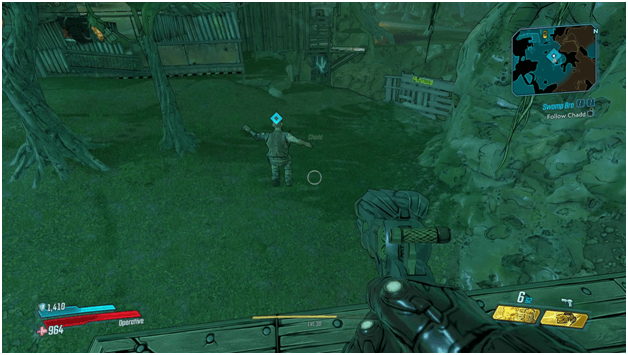 Chad will jump down a cliff and climb up a building just to jump back down again as he claims he is doing parkour and regardless of what he does its up to you to follow him or just continue staying nearby until he goes for the next big stunt. 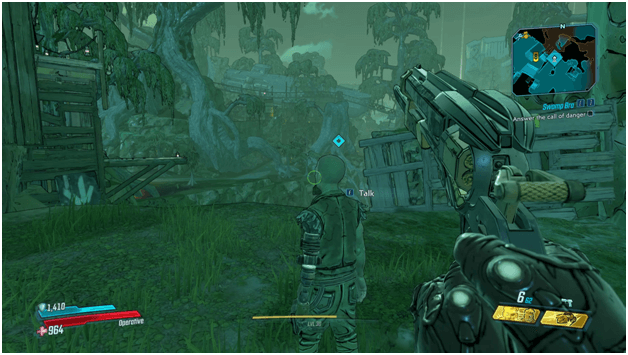 Chad will stop in place and start making a ring sound which he waits for you to answer like answering the call of danger and you must talk to him before he moves on. 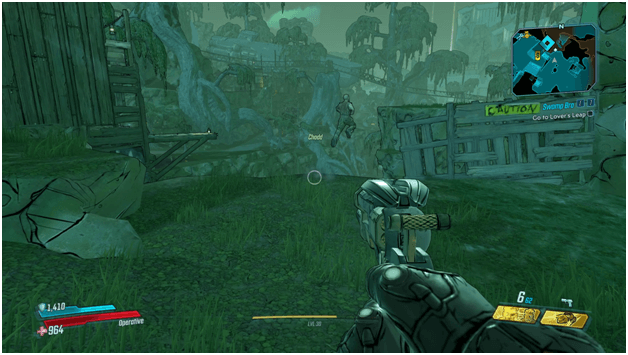 After answering the call of danger Chad will declare his next stunt, the Badass Base Jump and will jump to a nearby cliff. 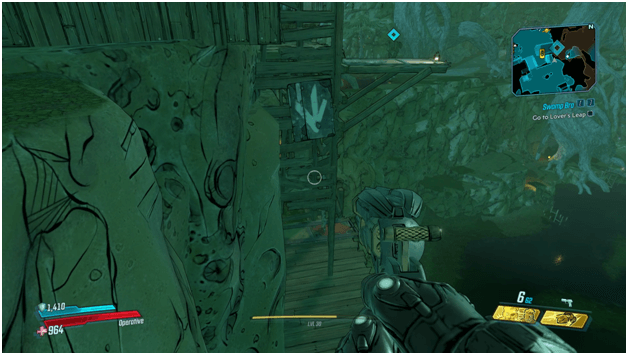 You will move onto the Lover’s Leap area which will give you a view so that you can witness Chad’s Badass Bass Jump. 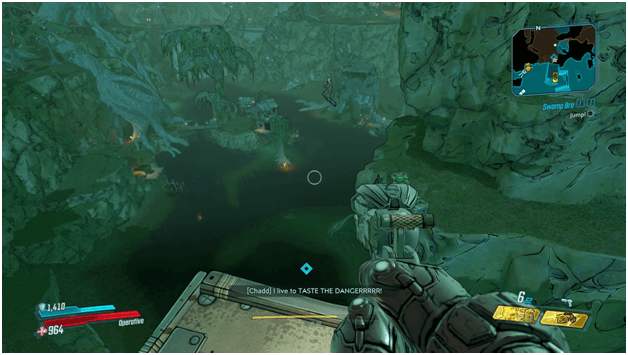 Once you are in position, Chad will shout and make his jump which later on will obviously injure him once again. 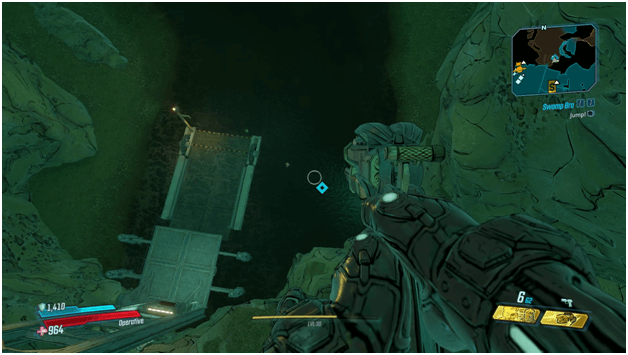 Jump down to where Chad is so you can once again help him out as well as get a kick out of the jump yourself. 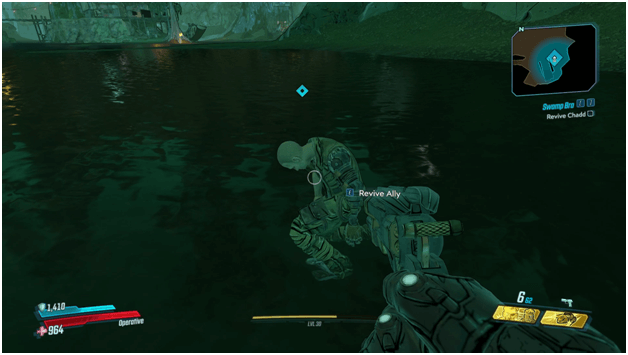 Chad will once again be downed and you will need to revive him once more so that the two of you can move on to his final stunt. 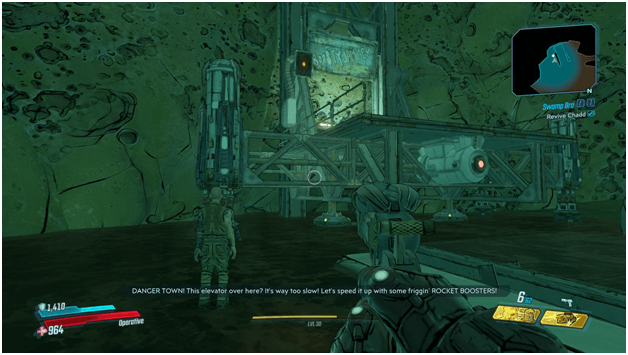 For Chad’s final stunt he will want to modify the nearby lift and add some rocket boosters to it since it is way too slow for him. 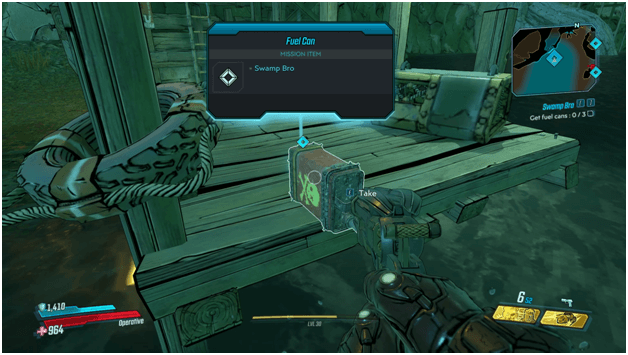 Head to the nearby shacks to take some of the fuel cans that are lying around and collect all 3 of them in the area. 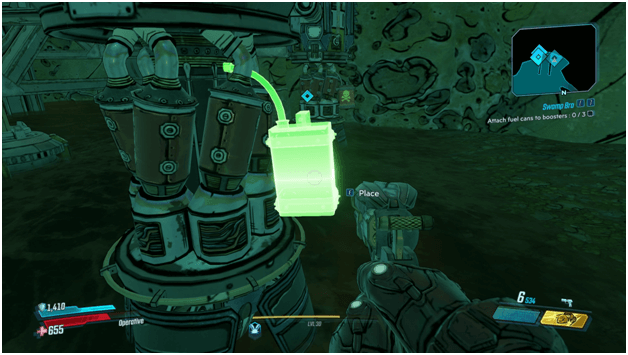 As you arrive back to the lift, place the fuel cans so they will power up the lift when activated which will allow Chad to do his final stunt. 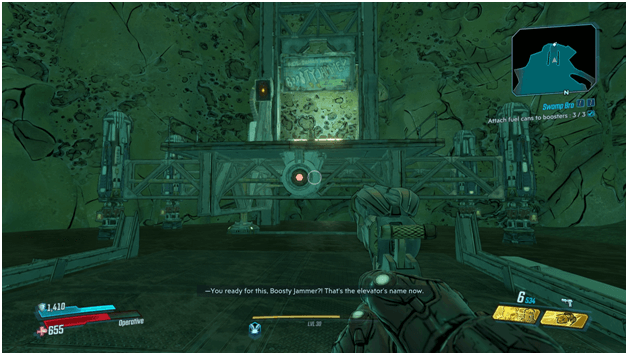 Chad will jump up onto the Boosty Jammer and tell you to watch but sadly it fails to activate. 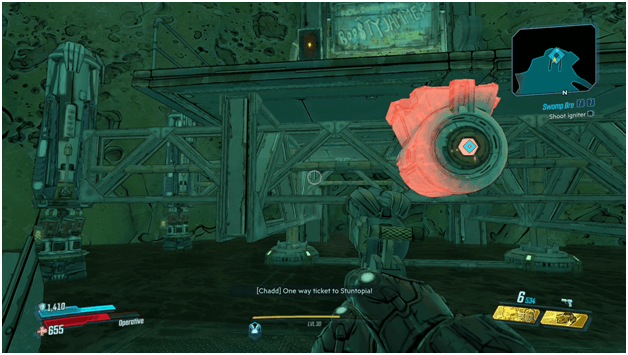 After the Boosty Jammer fails to work, Chad will tell you to just shoot the igniter to start the lift.

Chad also mentions that after the jump, you should go and access his stash for a reward.

You can actually get launched up with Chad on the Boosty Jammer as long as you just damage the igniter which can easily be done with a grenade. 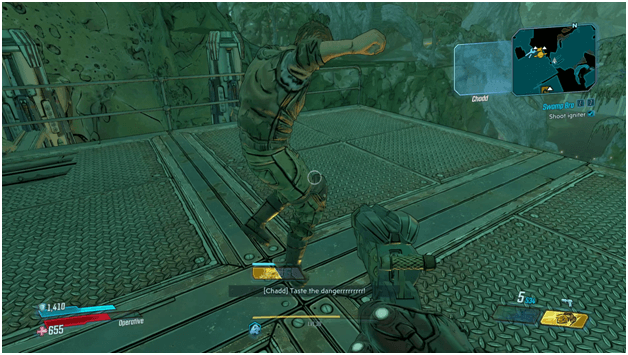 The Boosty Jammer will launch Chad into the air as well as you if you decided to get onboard. 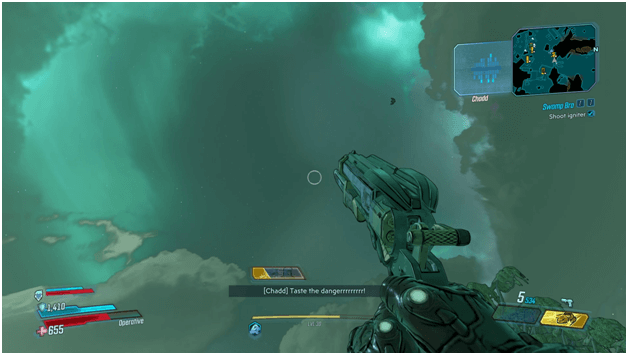 You won’t see where Chad lands as he just disappears and now its time for you to head to his stash and see what he left for you. 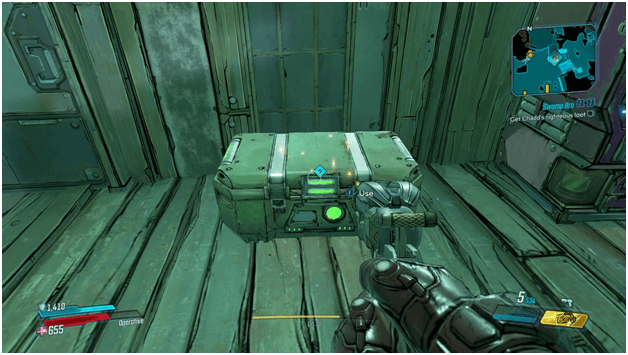 Head over to the waypoint where the case that was once locked will now be unlocked and you can now access the righteous loot that Chad said you can have. 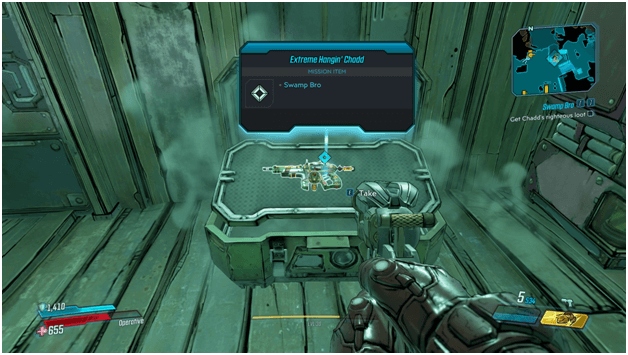 A weapon will be inside called the Extreme Hangin’ Chadd which you need to take to complete the mission. 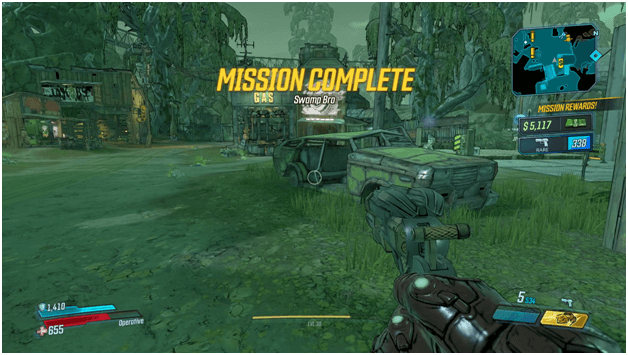 After completing the Swamp Bro mission, you will receive around 5,117 cash as well as the “Extreme Hangin’ Chadd” weapon that was in the container earlier. 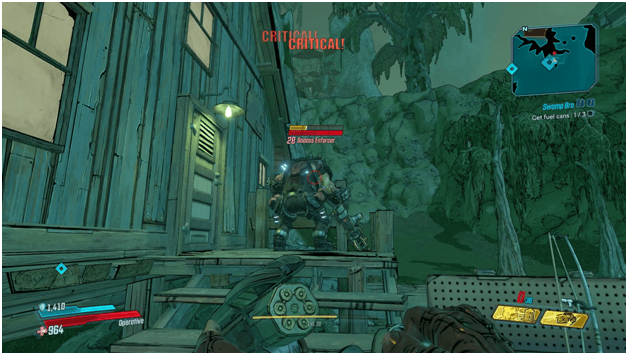