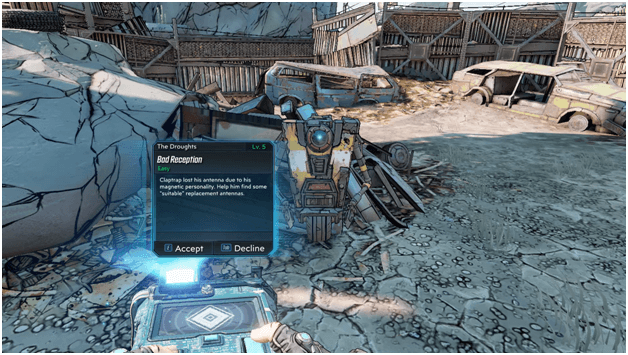 Claptrap has lost his antenna and he is devastated so its up to you to help him find a replacement as soon as possible to prevent him from remaining sad and miserable.

You will be tasked to check 5 locations for different items that may be used to replace the antenna that Claptrap no longer has. 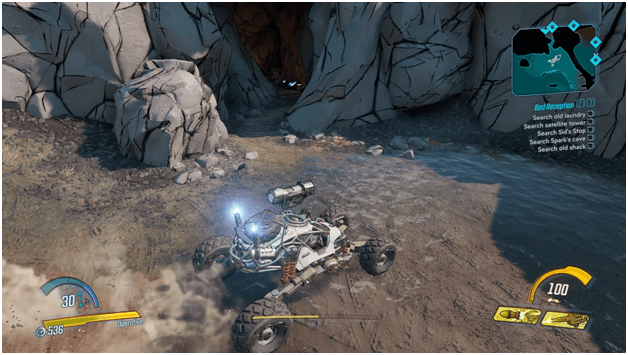 Head for Spark’s Cave which is closest among all the other locations and be sure to bring a vehicle with you as you will be going quite far which will take a while if you decide to walk. 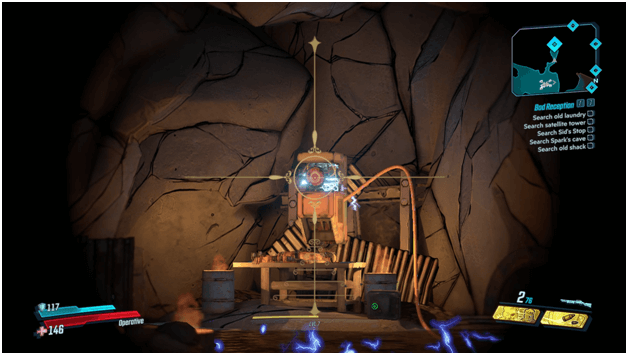 The area will be dangerous as there is an electrical current that will shock you which can be turned off by firing at the target where the electricity is coming from. 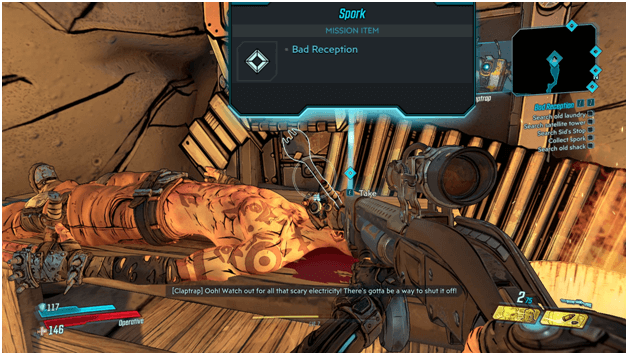 Once the electricity is gone, head over to the dead body that has a spork stabbed in a bandit’s head and take it. 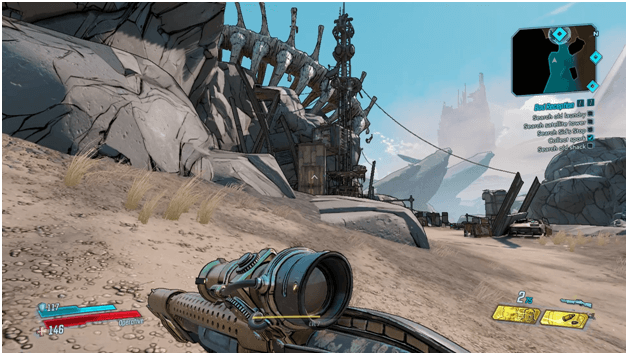 Drive over to the satellite tower marked by a waypoint and be prepared to fight not only bandits but wild creatures as well. 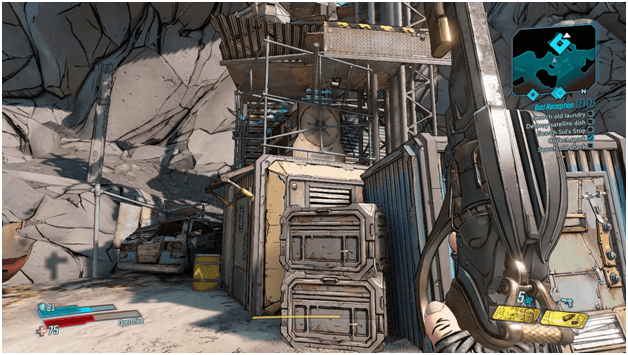 If you are having difficulty climbing due to other enemies, clear them all out first and make your way up but usually you can get up easily while ignoring everything except for the bandits. 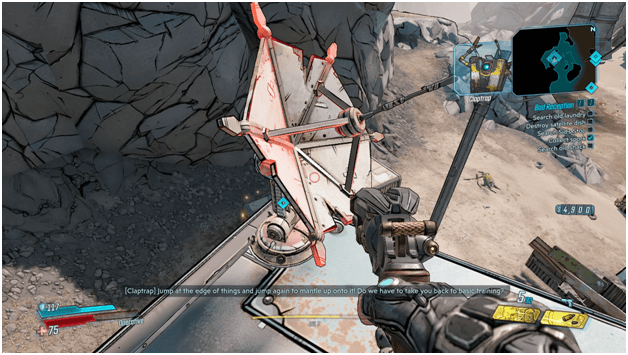 Destroy the satellite dish at the top of the tower to make it drop the antenna that is connected to it so you can pick it up after. 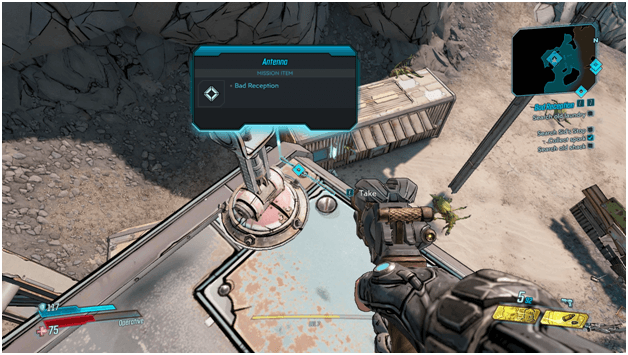 Pick up the antenna and head back to your vehicle so you can drive off to the next target location. 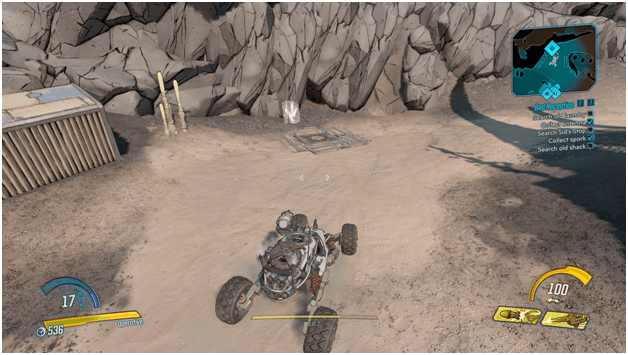 Head to the old laundry area which is located under a trapdoor which you must destroy to get inside of. 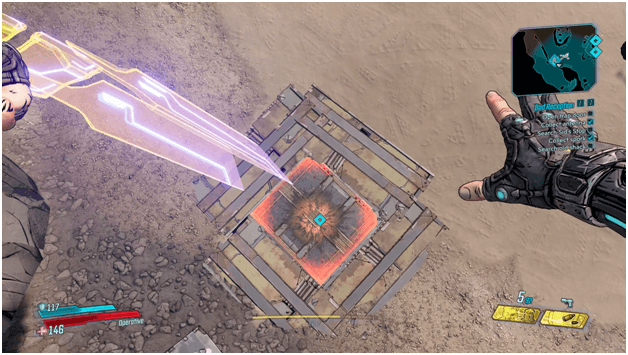 You will need to do a slam attack which can be done by jump from a slightly elevated area and pressing the crouch button down in midair.

This can be done from the top of a cliff located above the laundry area which can be reach by climbing the containers at the side or by simply jumping off of a container after sprinting where you will be high enough to initiate a slam attack. 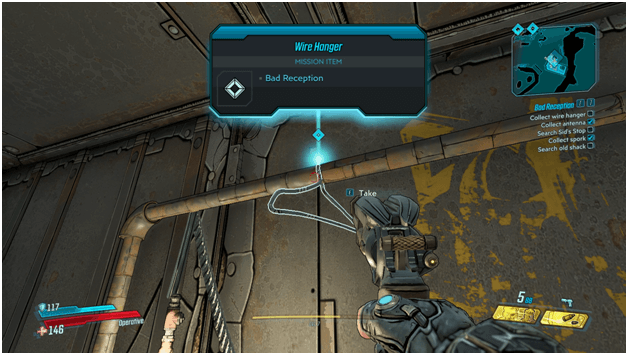 Head down inside the laundry area and kill a bandit that will be crawling out then proceed to the item located at the side.

Pick up the item which is a wire hanger and head back out to your vehicle to go to the next item on your list. 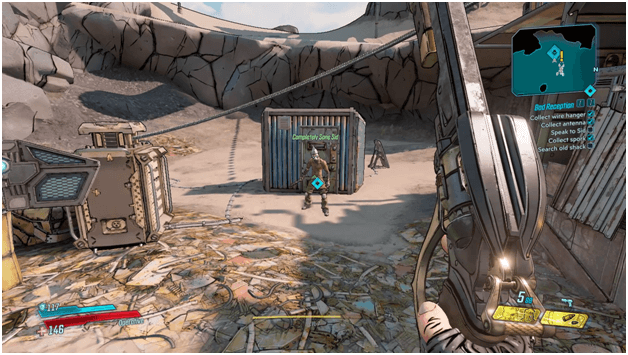 Sid’s Stop may be a tricky place to get the item if your new so be sure to check the spots thoroughly or you might have a hard time running around and looking for the objectives.

Talk to Sid who is temporarily sane due to the tinfoil hat on his head which you are about to take for Claptrap. 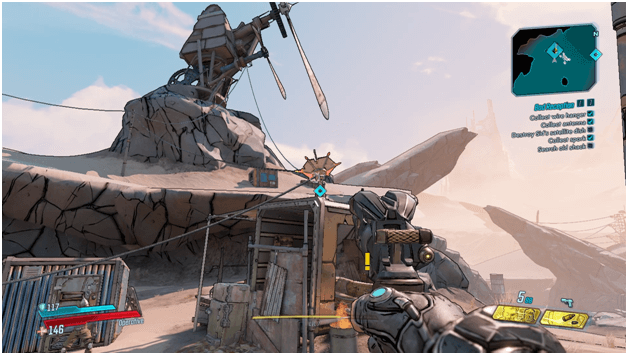 Sid will need you to destroy the satellite dishes located around the area whereas the first dish is on top of his shack.

Shoot the dish on to of his shack and proceed to the next one which can easily be spotted from the side of the shack. 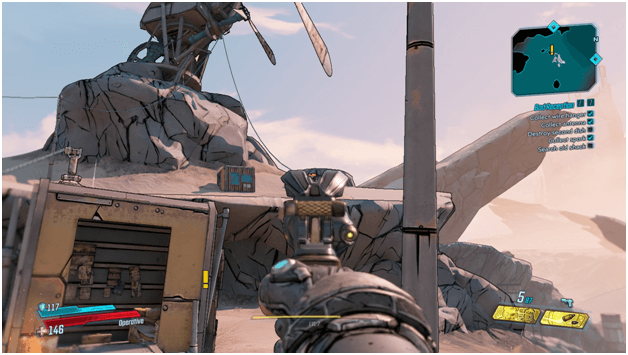 Move to the front of the shack and look under the giant windmill where a satellite dish will be glowing red.

Shoot the dish and head to the back of the shack to easily spot the next dish that you need to shoot. 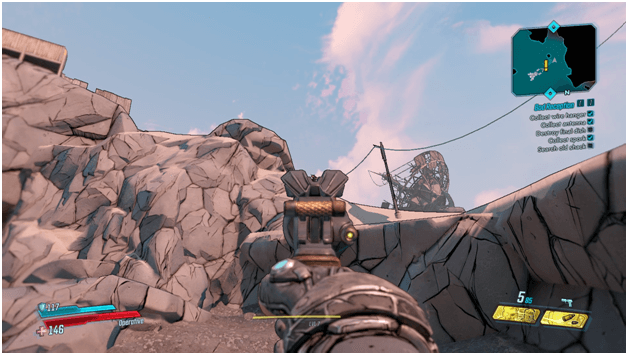 Once you are at the back of the shack, look towards your left and you will see the satellite in the distance.

Take a carefully aimed shot as it is possible to miss with some weapons and after you destroy the dish, head back to Sid. 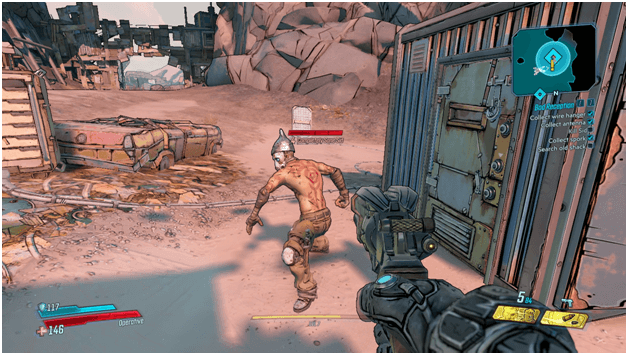 Sid will become hostile so just kill him which can easily be done with a few shots which shouldn’t be that hard to aim. 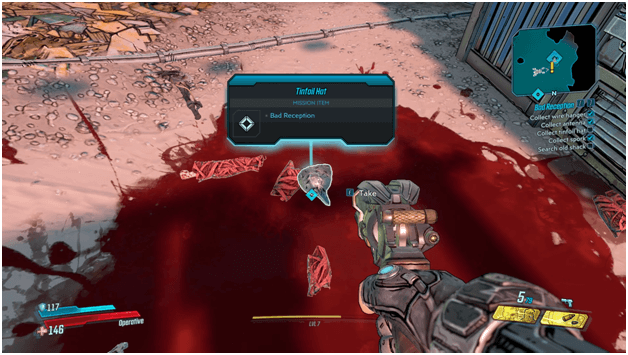 After killing Sid, take the tinfoil hat that he was wearing and head back to your vehicle to go to the last waypoint. 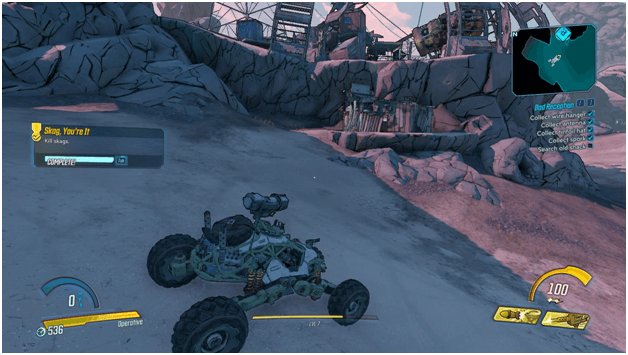 The last and pretty much one of the most annoying items to get through is inside a shack with an automated door, a tink sentry and a badass tink. 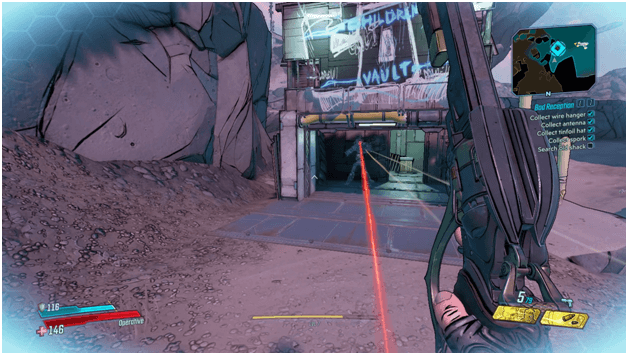 Take the turret out first as it will deal a lot of damage if you allow it to continue firing at you which can cause you to get downed if you are reckless. 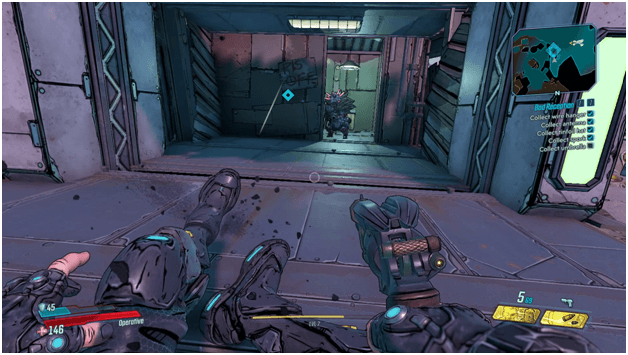 After dealing with the turret, sprint up to the shack and slide inside as the door will close and block you if you are too slow.

Once inside, deal with the badass tink by shooting at it and taking cover behind the wall repeatedly until you kill it. 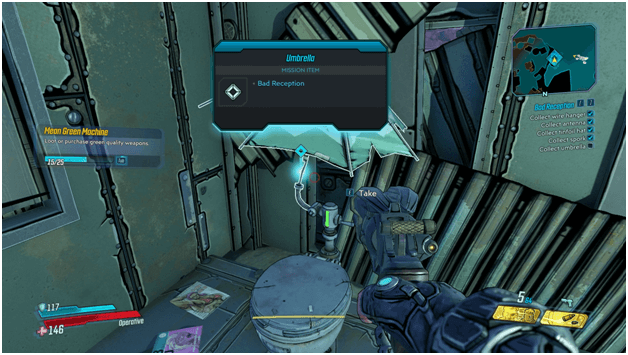 After killing the badass tink, head inside further to pick up the umbrella that is attacked to a toilet and exit the shack. 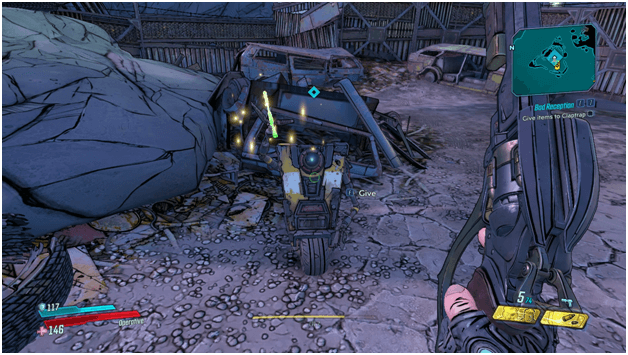 Once you have all of the items, head back to claptrap by either driving back your making use of the fast travel feature heading to the propaganda center. 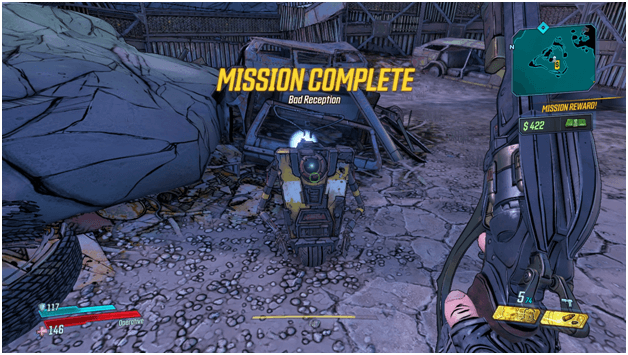 Completing the Bad Reception mission will reward you with 422 Cash and you will be able to pick out which antenna Claptrap will use for your own amusement.

Claptrap’s antenna may be changed at anytime and he will say different lines depending on what you switch his antenna to. 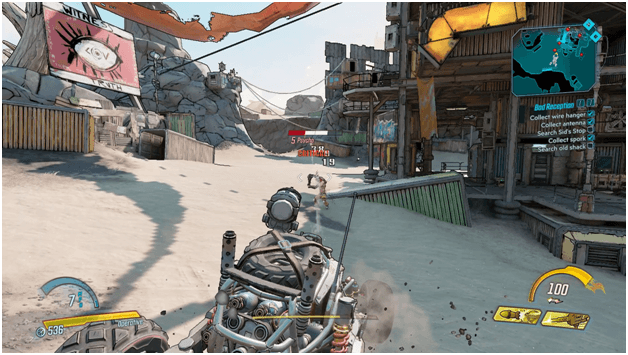