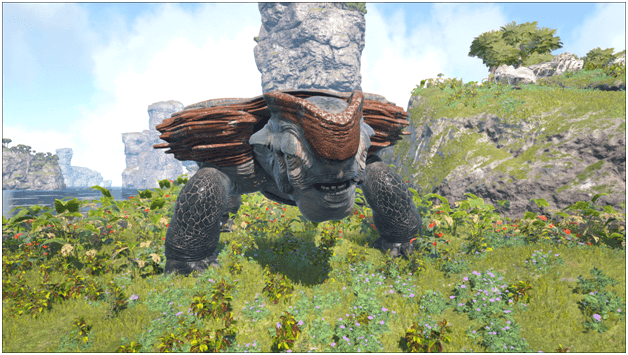 The Megachelon is an omnivorous large breed of turtle that exists within the Genesis Simulation and has a docile temperament yet will respond aggressively when threatened.

This creature has more body parts than most turtles do, having 6 legs in total along with 4 eyes on its head

In the wild they feed on schools of small fish since they are not equipped to hunt larger sea creatures and due to this, they are also easily preyed upon by larger predators of the deep.

Humans that get close enough can benefit from the bubbles that the Megachelon produces to replenish their oxygen since the creature will not consider them a threat unless attacked.

Once tamed they can act as a mobile sea platform where you can build and affix structures too, that can dive underwater with a breathable habitat for its passengers. 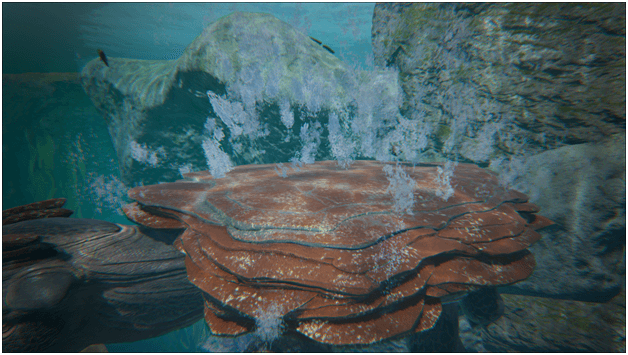 Megachelon provides an oxygen field while underwater for anything on its back or sides that replenishes oxygen for creatures.

This provides tribes with an unlimited amount of oxygen for venturing further into the depths of the ocean. 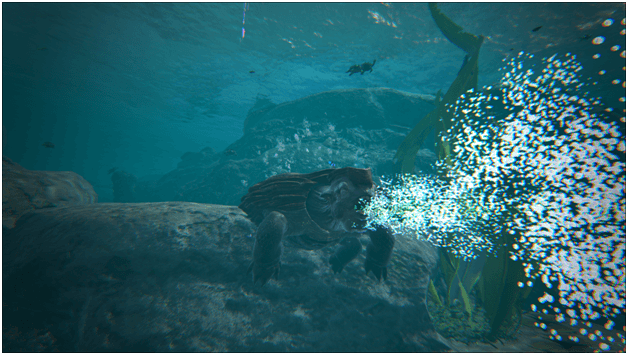 The Megachelon is capable of exhaling a torrent of air that will create a bubble around creatures that are hit, forcing them to float to the surface. 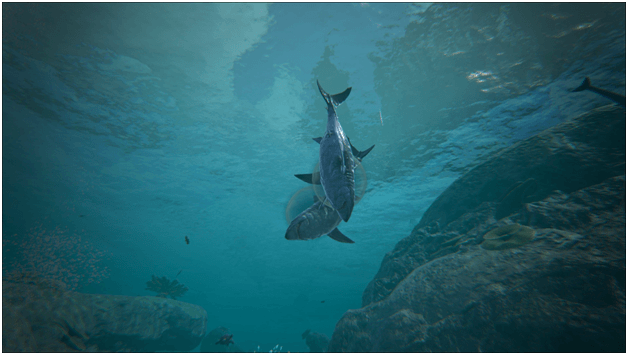 This can help the Megachelon protect itself from multiple creatures that are attacking it and provide tribes with an advantage when facing enemies underwater. 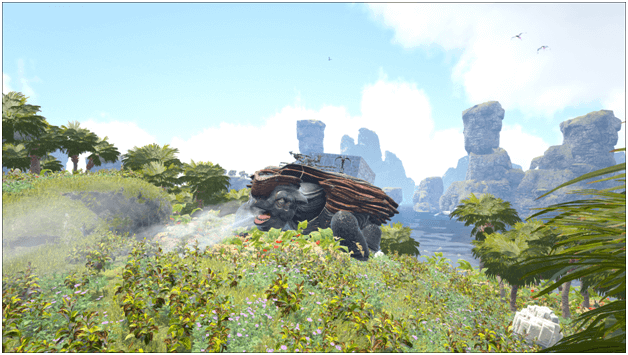 While out of the water, this ability will instead blow a large amount of air forward, pushing certain creatures out of the way.

With the ability to have structures built on its back, the Megachelon works as a great mobile base and is even great for underwater due to the oxygen it provides.

With proper positioning the Megachelon can take on massive amounts of damage and survive several attacks.

Megachelon provides an unlimited breathable field around it, negating the need for oxygen tanks while underwater.

Over time, the Megachelon is capable of producing Rare Flower and Rare Mushroom which can be collected from its inventory. 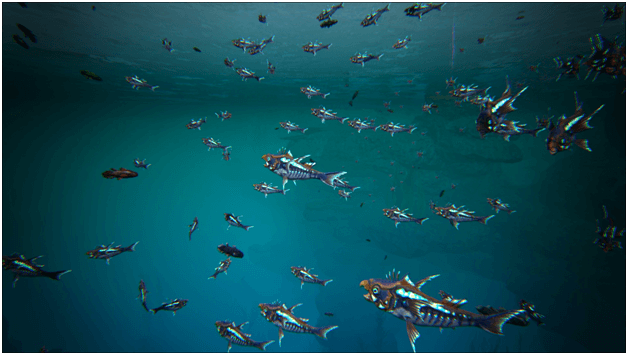 In order to tame the Megachelon, you need to find a school of Parakeet Fish and get them to chase after you.

This can be done by locating them and moving into range where you will be warned when you are targeted. 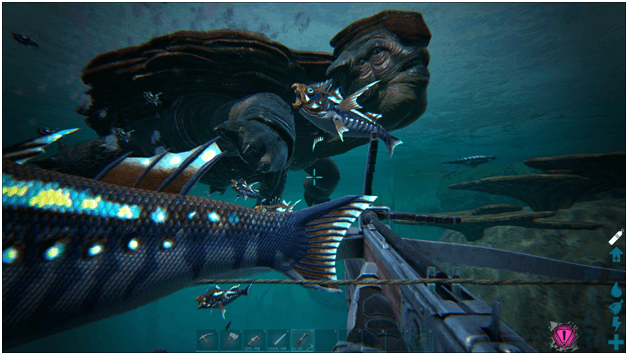 Once you are targeted by the Parakeet Fish School, head to a Megachelon and remain nearby until it feeds on the fish and becomes tamed.

Be sure to protect the Megachelon as other creatures may attack it, reducing the effectiveness of the taming process or even stop it entirely.

The Megachelon will eat all sorts of food as it is an omnivore, making it easy to feed regardless of the food being meat. vegetables or berries. 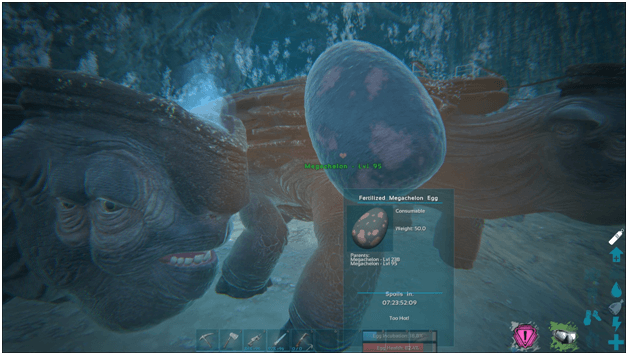 Megachelon can only breed when they are in the deepest part of the ocean and survivors may tell when they can breed since there will be a notification if they need to go deeper when mating is enabled.

After mating, the female Megachelon will drop a Fertilized Megachelon Egg which is distinguishable by its grey color with peach colored spots.

A Fertilized Megachelon Egg must be hatched in the very deep part of the ocean as well and it is best to hatch the egg after mating. 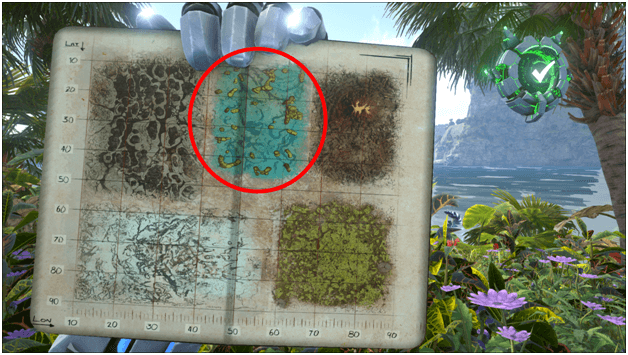 The Megachelon is usually seen swimming in the shallow and mid level areas of the Ocean biome in the Genesis Simulation.

These creatures will usually be swimming around peacefully or will be encountered being attacked by other predators. 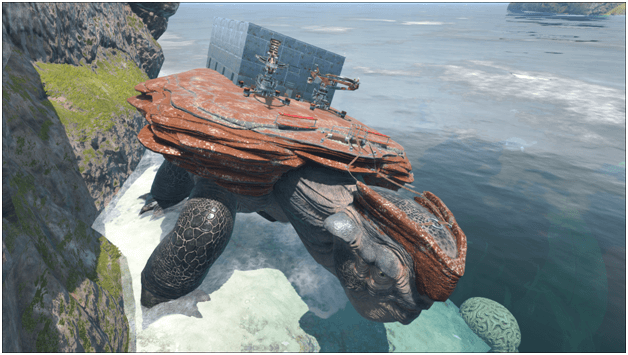 While the Megachelon may not be the fastest sea creature, it is quite tenacious and does have its uses such as a good mobile base as well as a big help when underwater since it can provide unlimited oxygen.

This creature may also walk on land as it can scale terrain easily due to its many limbs and its large size, allowing it to tread over areas that other creatures cannot.

The taming process for the Megachelon may not be the easiest but once you have one, you can expect a more comfortable experience traveling underwater.

How To Make Cactus Broth in ARK