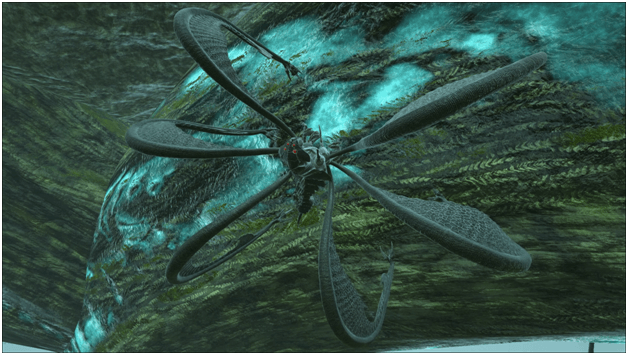 These creatures share a similarity with spiders but have a few improvements such as limbs that can swipe with extreme speed to rend flesh along with appendages that act as an organic interface with its partner.

In the wild, Bloodstalkers are patient hunters that stay above the treeline while observing potential prey and once they find a victim they can snatch with their web, they pull them up to their location to feed on the helpless victim.

The Bloodstalker will not miss out on the opportunity of an easy meal of humans, being almost invisible in the canopy while humans barely stand a chance once grabbed by the creature.

Once tamed, this creature shares a symbiotic relationship with its owner which is formed by it latching to the survivor so that they can perform the actions that the survivor has in mind as well as give them improved senses. 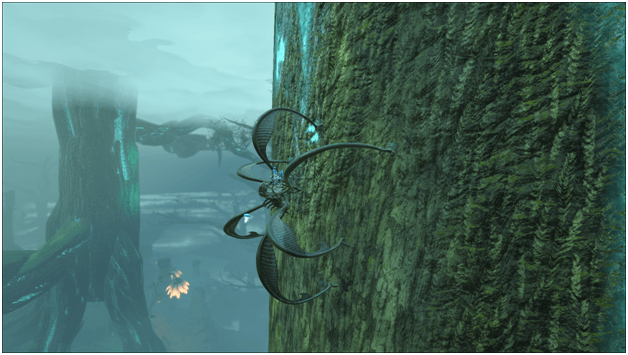 The natural structure of the Bloodstalker’s body allows it to climb on surfaces just like a spider could, being able to freely move wherever it wants to and even hang from different surfaces.

Moving up to a surface that cannot be scaled by other creatures will cause the Bloodstalker to begin climbing it. 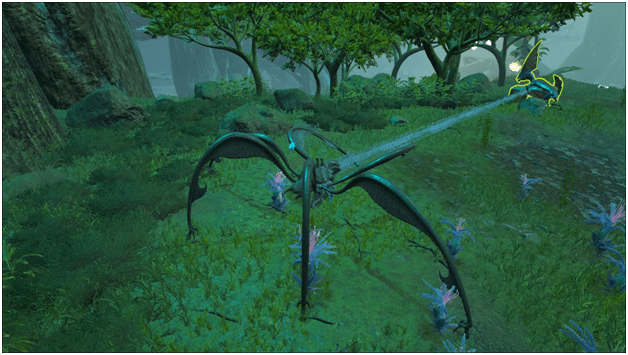 Creatures and survivors may be targeted when highlighted with a purple color, signifying that they can be pulled.

Using the primary fire button will cause the Bloodstalker to shoot out a straight web that will catch the target, preventing it from moving away. 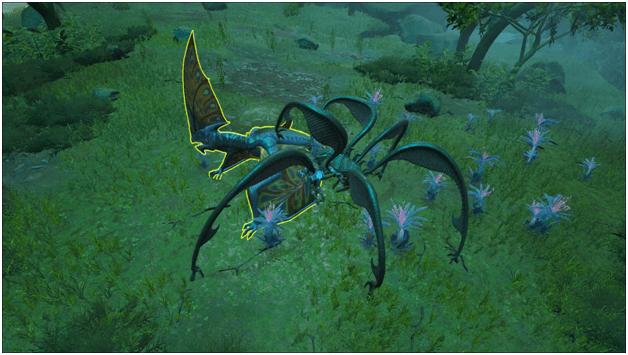 The Bloodstalker may then reel in the target and will eventually begin attacking it when it has been pulled to its location. 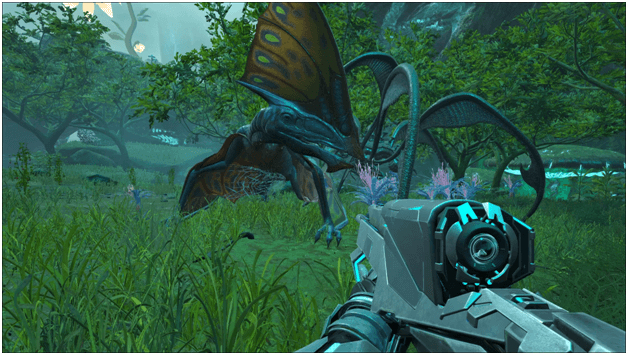 Dismounting the Bloodstalker while it is holding on to a target will allow you to remove freely as it continues to attack the target. 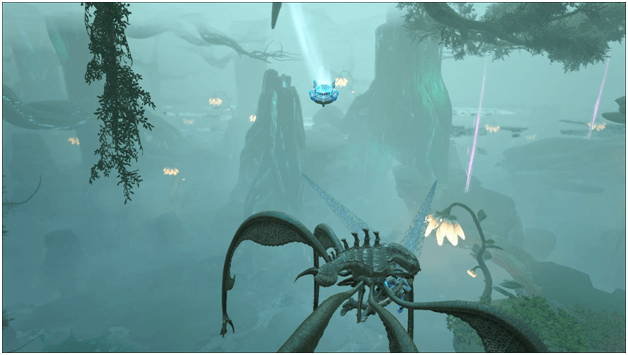 Bloodstalkers may use their webs to pull them across long distances and may easily climb up areas by repeatedly using this ability.

There will be markers depicted by yellow colors to show where the webbing will be shot, giving the survivor an idea of how the Bloodstalker will be propelled forward. 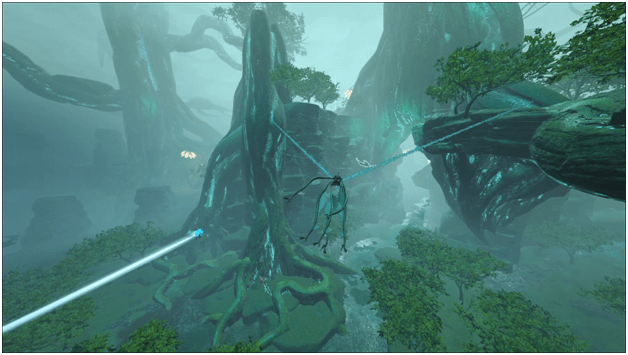 The webbing may be released by pressing the jump key/button to allow an early release and control the momentum of the Bloodstalker.

In order to detach while the web is anchored, press the jump key/button. 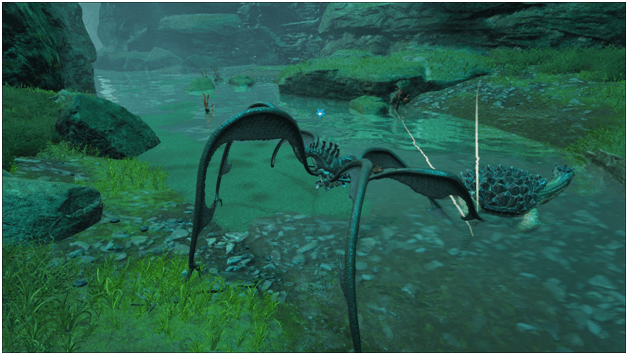 While the Bloodstalker is mainly known for pulling itself across distances as well as pulling enemies towards it, it still possesses the ability to attack which is performed by it  using sharp claws to slash at its enemies. 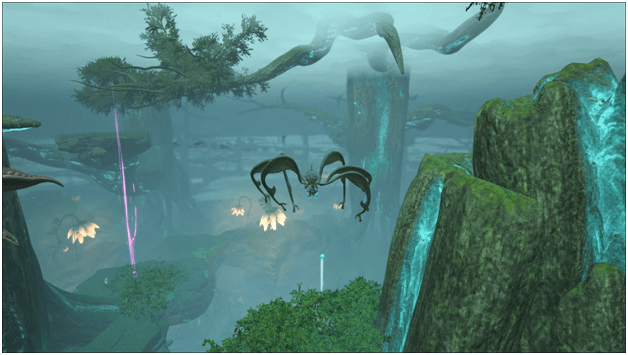 Bloodstalkers may jump twice and can charge their jump to reach greater heights which aids well with its ability to swing around with its web.

Holding the jump key/button will charge up a jump to reach a higher area while attempting to jump one more in the air will perform a double jump. 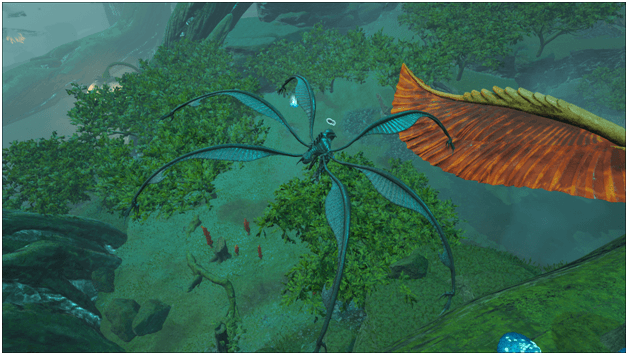 While airborne, the Bloodstalker may use the flaps on its limbs to glide through the air, slowing down its descent and traveling further. 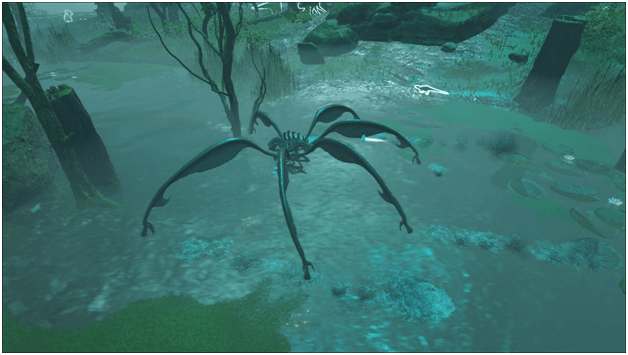 Bearing insect features, the Bloodstalker has the ability to stride on water, remaining at the surface to easily cross it. 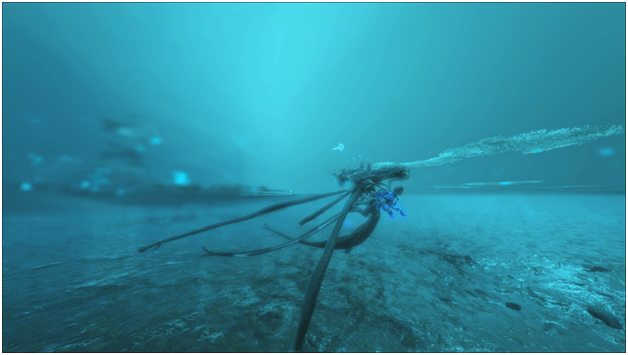 Will the Bloodstalker usually strides across the water, it is capable of diving into it, allowing survivors to explore deeper parts of the waters around. 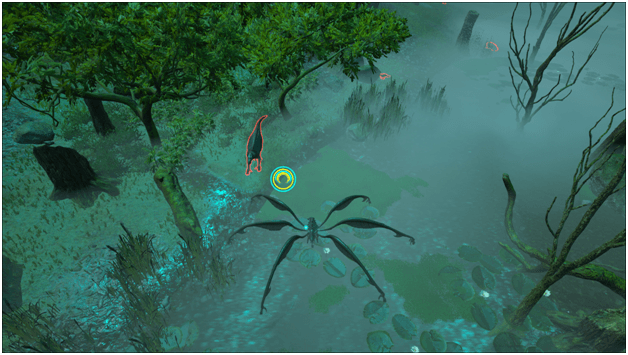 While the Bloodstalker is attached to the survivor, it grants the the same vision that it has where its predatory senses outline possible victims and the survivor may also get a good sense on where the creature will cast its webs.

Due to its ability to climb on surfaces and to bring itself across great distances, the Bloodstalker is one of the most versatile mounts that there are, being able to reach places most creatures are incapable of as well as it can also protect itself if there is a need to do so.

Using its webbing, the Bloodstacker can pull creatures and hold on to them while dealing minimal damage in order to allow its owners to tame the creature that it has caught.

With its ability to carry its owner and give the ability to fight while also being in motion, the Bloodstalker makes an excellent tame to have when fighting against enemies or wild creatures.

The Bloodstalker is capable of grabbing on to enemies after it snags them to reel in and not only does this work for small creatures but it can also target medium sized creatures and even flyers. 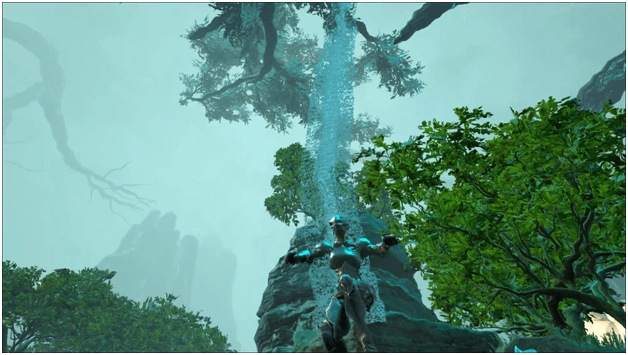 As of now one of the most efficient ways to tame a Bloodstalker is to have them catch you and feed off of Blood Packs that you keep in your inventory.

First you will need to head to the location where they usually can be found which is best to go look for them near the center of the Swamp Biome.

Eventually you will find one or they will find you and you will immediately be snagged by their web and pulled up. 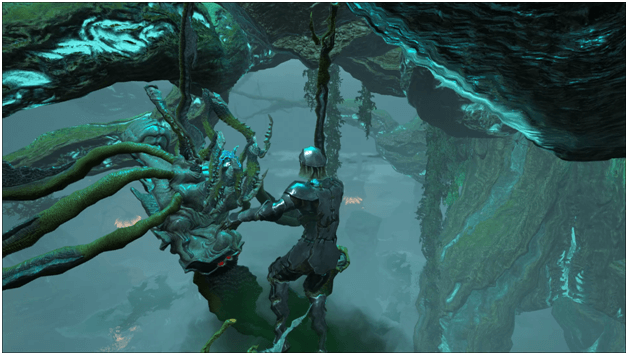 Once you have been pulled towards the Bloodstalker, it will begin to extract blood from you but if you have the Blood Packs, it will feed on these instead. 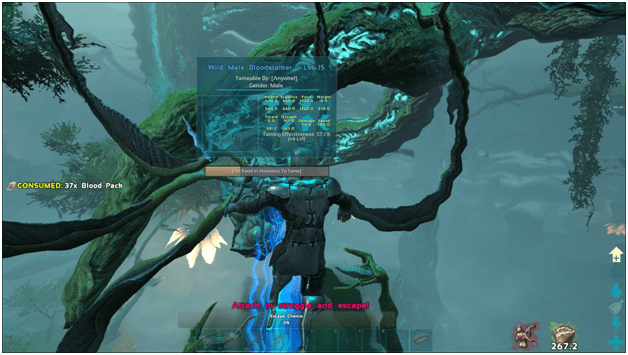 Their taming bar will increase depending on how many Blood Packs they have consumed and once they have had enough, they will be tamed but in the event that you run out of Blood Packs, its best to attack them or else you will end up being its meal. 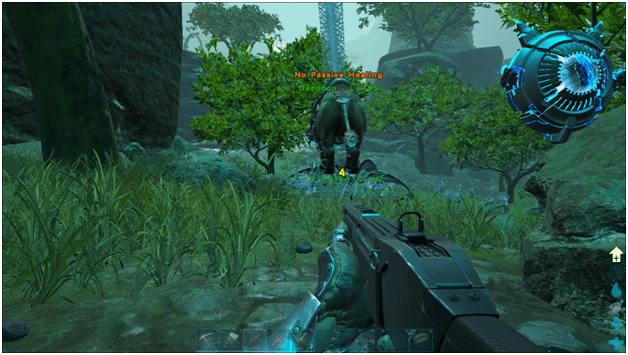 It has been seen that some creatures can be sacrificed to provide a large increase to its taming bar but not all creatures can do this making this just another option of taming until further notice. 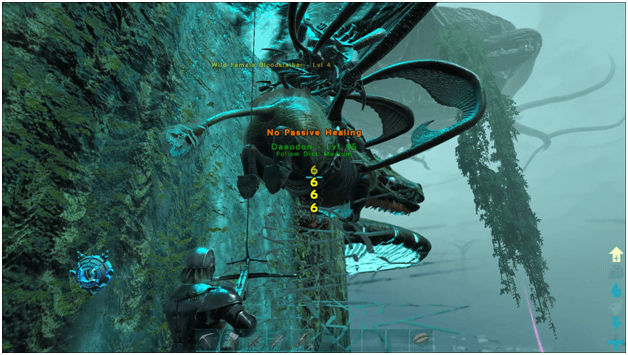 To have the Bloodstalker feed on your creature, simply make sure your creature crosses its path or set it on wander.

Be careful as the Bloodstalker may snag you if you are the first target it notices so it’s best to make sure you get your tame closer to them before you do.

The Bloodstalker does not require a saddle and will instead latch on the survivor and carry them based on their symbiotic thoughts, allowing the user to basically control the creature. 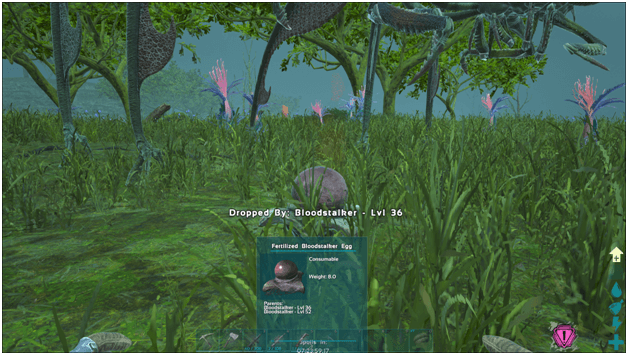 These spider-like creatures are capable of breeding and will produce an egg that is purplish in color and very unique compared to other creature eggs.

When a male and female Bloodstalker mate, the female will lay this egg which will eventually hatch into a Baby Bloodstalker that you can raise. 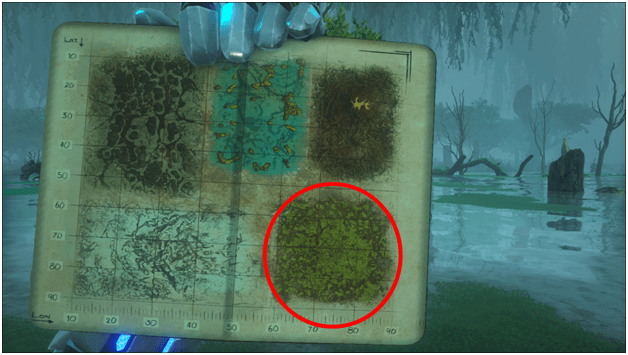 The Bloodstalker can be found in the Swamp Biome within the Genesis Simulation where it is usually latched on to trees.

Bloodstalkers are easier to find if you stay near the trees and one will eventually pull you up if you get too near it. 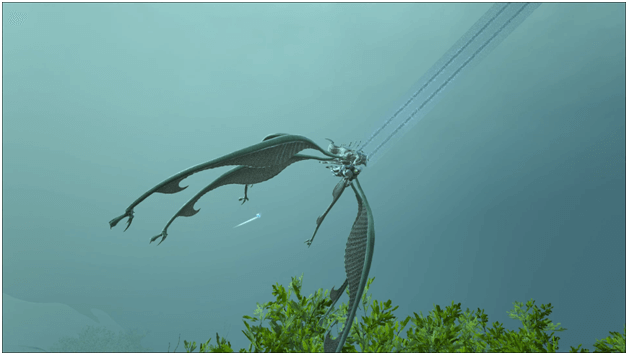 While most wouldn’t dare venture into the swamp, most survivors have tried to brave such a creature but only a few have been known to tame such a hungry swamp dweller.

The relationship that the creature shares with its host seems to be very formidable as it surrenders its every whim to its owner and allows them to take full control of their limbs.

Tribes that make use of this creature can easily get around areas and easily handle wild creatures well or get away from them when in danger.

While this creature may take its toll in blood, you can expect this amazing hunter to help you catch prey that you are set out to take down.