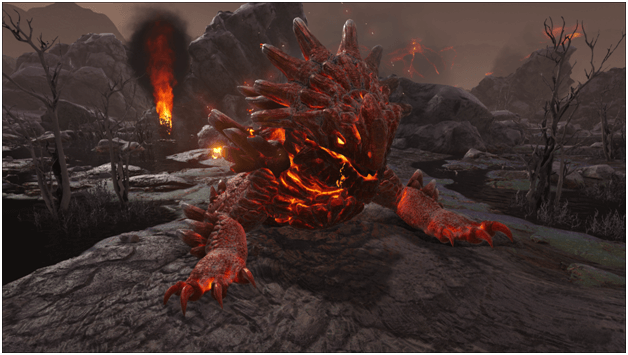 Magmasaur is a territorial carnivore that lives in the magma pits of the Volcano Biome in the Genesis Simulation.

They can only be described as walking inferno lizards as their whole body appears to be manifested with scorching hot fire.

These creatures can be seen wandering around the Volcano biome while several dwell within the Volcano itself, protecting their eggs which will soon be new hatchlings.

When these creatures sense you nearby, you are likely to be in for trouble and it is best to avoid these creatures until you are equipped with the means of fighting back.

Tribes that have tamed these creatures use them literally as tanks, being able to withstand damage and deal it as well. 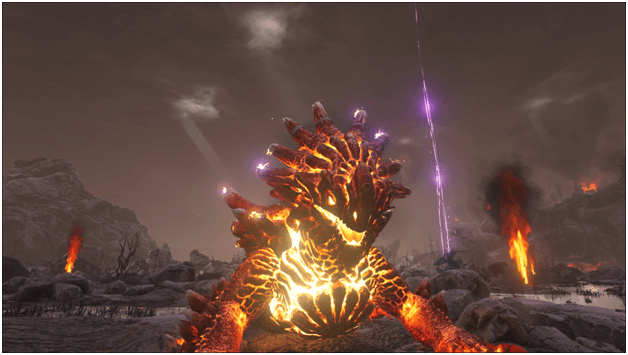 The Magmasaur begins to stack up on heat, preparing to follow up with another action such as spitting out a ball of fire or scattering clusters of molten rocks to explode around it.

As the Magmasaur heats up, enemies or wild creatures that are too close will begin to catch on fire, burning and taking damage over time.

Releasing this ability without performing any other actions will cause the Magmasaur to fire a fireball(a marker will show where it will be aimed) at a certain area.

Hold the alternate fire key to begin heating up. 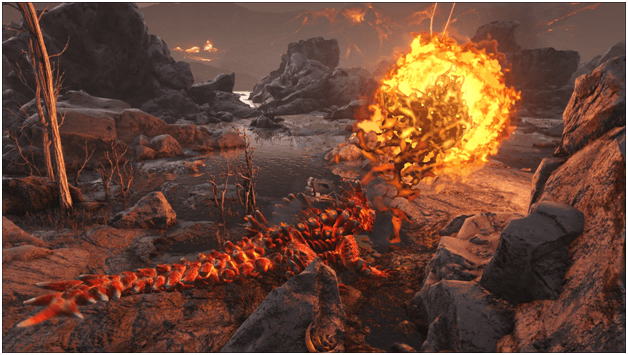 After the Searing Heat action is performed, releasing the ability without doing anything else will fire out a ball of fire that arcs forward, explodes on impact and sets enemies ablaze. 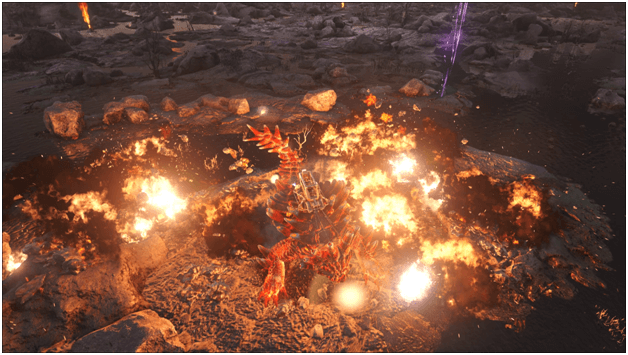 While charging up your Searing Heat, the Magmasaur may choose its action and instead of spitting out a ball of fire, it will release molten rocks to explode all around it, dealing damage to enemies or creatures while also setting them on fire. 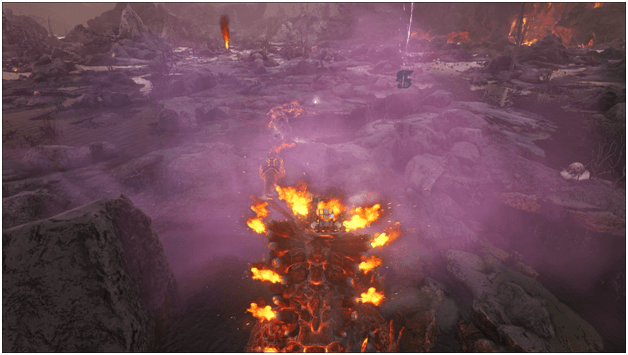 Instead of releasing a fiery attack, the Magmasaur instead creates a gas that taunts enemies into attacking it.

This goes well with its Searing Bombardment ability as it can clear up enemies in no time. 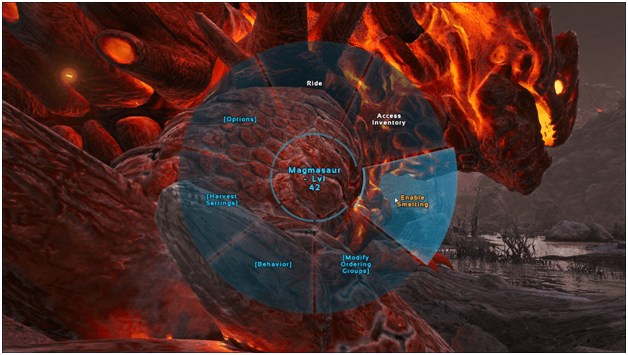 Being that this creature is full of a molten being, it is capable of reaching temperatures so high that it can process metal ore.

By selecting to enable or disable the Smelting ability of the Magmasaur, you can choose to allow it to start processing metal that is stored in its inventory or that it has collected. 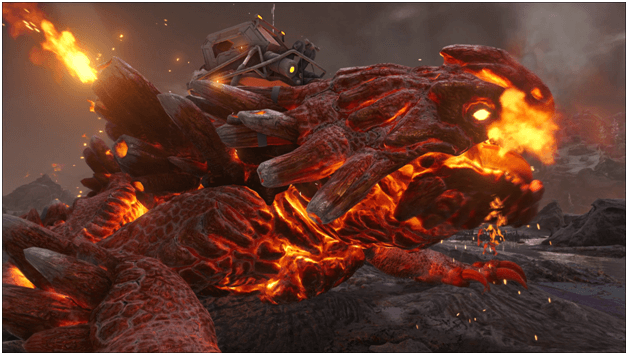 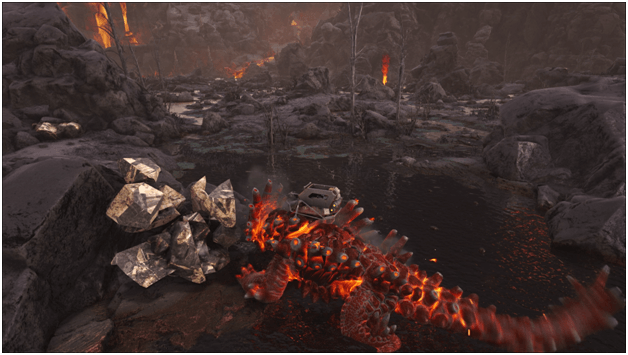 The Magmasaur is strong enough to destroy large rocks, allowing it to collect the resources such as metal, stone, flint and other resources collected from such nodes.

The Magmasaur has a natural affinity with metal which grants it a 75% reduction towards carrying metal in its inventory.

The Magmasaur is capable of dealing a lot of damage to enemies in the form of both instant damage as well as damage over time as it has the ability to set targets on fire.

This creature is naturally durable and has a large amount of health, making it good for tanking and even taking on multiple creatures as it even has the ability to taunt them.

The ranged attacks of the Magmasaur can damage structures which makes it a good creature to bring along with raids as it can deal a lot of damage to both enemies and their structures from afar.

Being able to destroy stone, it is shown that the Magmasaur is capable of gathering resources from ore nodes in order to obtain stone, flint, metal and much more.

Not only is the Magmasaur capable of harvesting metal, it can also process them into metal ingots, saving time.

How to Tame Magmasaur (Raising)

Magmasaur are untameable and instead, survivors must steal an egg to hatch their own Magmasaur from birth and raise it as a baby. 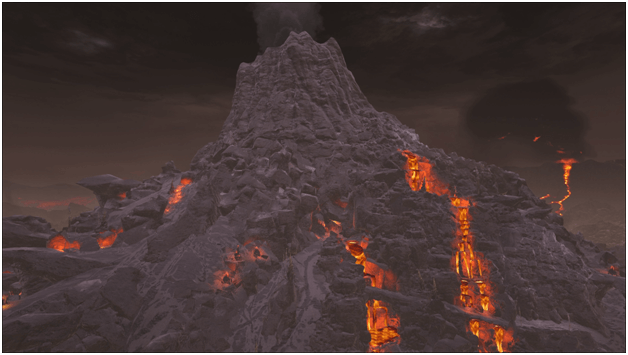 Survivors may find Magmasaur Eggs within the Volcano in the Genesis Simulation but getting to these eggs may be quite a challenge.

There will be other creatures that can bring harm to those that enter, not to mention the Magmasaur that can be found within pose a great threat. 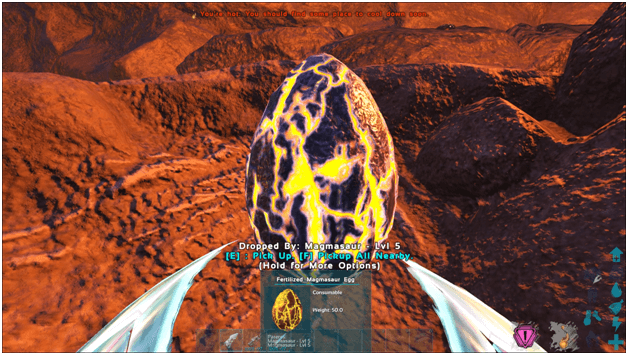 Within the volcano, Magmasaur Nests may be found and will have the Fertilized Magmasaur Egg of nearby adult Magmasaur.

Taking this egg will cause the Magmasaur nearby to become very aggressive and is highly advised to make sure you remember the way out and have a good plan to escape. 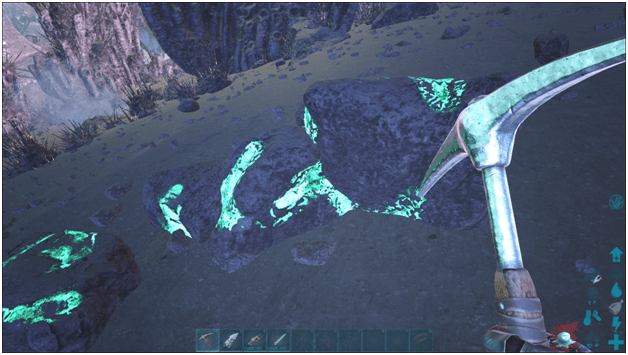 It is important to keep in mind that hatching a Magmasaur Egg does not require being at the volcano as campfires or air conditioners will do the trick but the food they eat needs more attention.

Baby Magmasaur will only eat Ambergris which is found in the Lunar Biome by destroying rocks that can be seen with glowing cyan marks on them.

Baby Magmasaur will only eat Ambergris but once it has fully grown, it will eat the normal food. 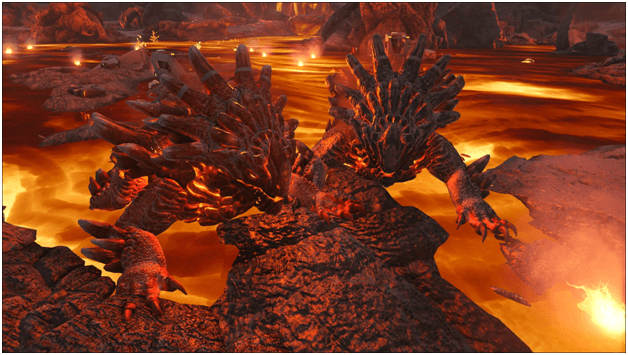 Like any other reptile, the Magmasaur can lay a fertilized egg but their breeding nature may have a small difference as they must be in their natural habitat, mainly in lava.

In order to breed Magmasaur, you will have to make sure that part of them is submerged or on lava which can be seen if there is a notification on the create if set to enable mating. 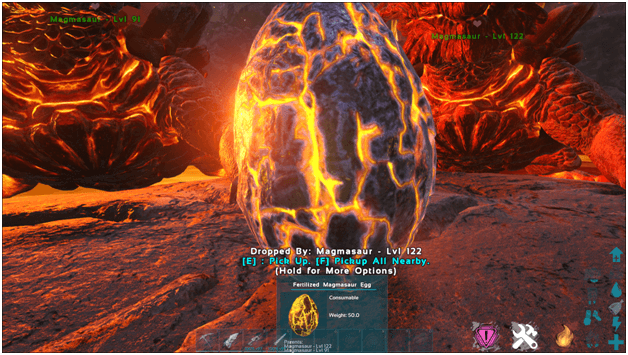 Once Magmasaur have successfully mated, the female will drop a Fertilized Magmasaur Egg which is distinguished by its molten look. 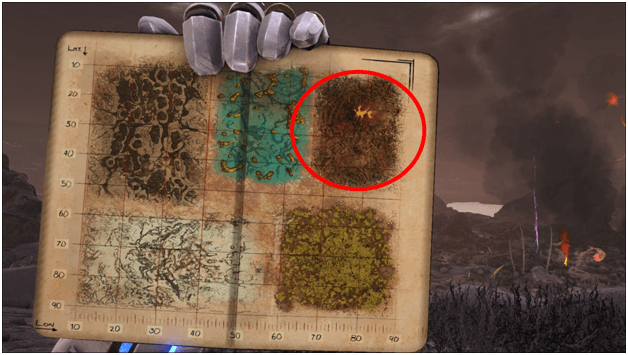 The Magmasaur can be found roaming around in the Volcano Biome within the Genesis Simulation while a large number of them are further within the volcano itself.

These creatures are usually found guarding their nests inside the volcano, protecting their eggs from intruders and thieves. 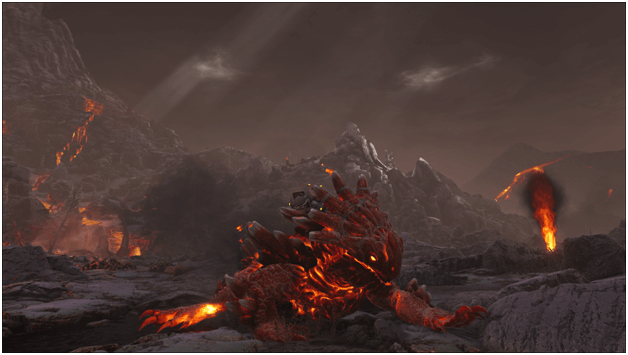 These massive beasts of magma are very deadly to those who do not take caution when nearby as they can incinerate their targets within seconds.

This creature is a natural predator in the Volcano Biome has evolved to a state where it is unharmed by lava and can even survive submerging into it.

Tribes that tame this creature have one of the best offensive creatures there are due to its ability to tank damage head on as well as deal it, making it capable of initiating combat and even finishing groups of enemies with ease.

Aside from being a fiery tank, the Magmasaur also provides utility to its owners as it can collect metal along with other ore and even process the metal into ingots for the tribe to use later on.