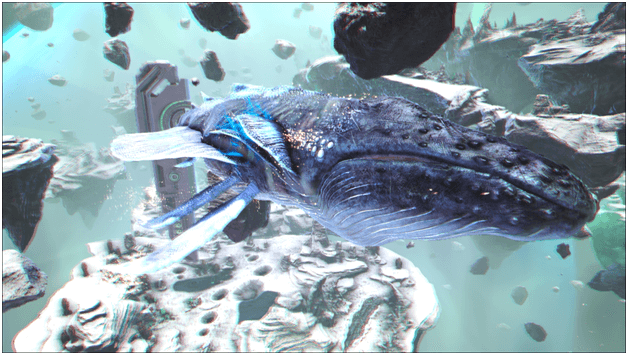 The Astrocetus is a docile and carnivorous whale-like creature that exists in the Lunar biome of the Genesis Simulation and is considered to be a Tek tier creature.

These large creatures have a close resemblance to a whale and appear to have been exposed to the effects of its biome, resulting in its cosmic state.

Similar to a whale swimming in the ocean, this space whale freely swims around the Lunar biome, wandering around while avoiding the dangers from the surfaces below it.

While taming such a creature may require a lot of effort, the just rewards are great due to the creature’s natural ability to warp through space and its compatibility with a tek saddle that turns it into a dangerous gunship.

Once tamed, an Astrocetus provides tribes with a heavy amount of firepower and becomes a very big advantage during raids and battles. 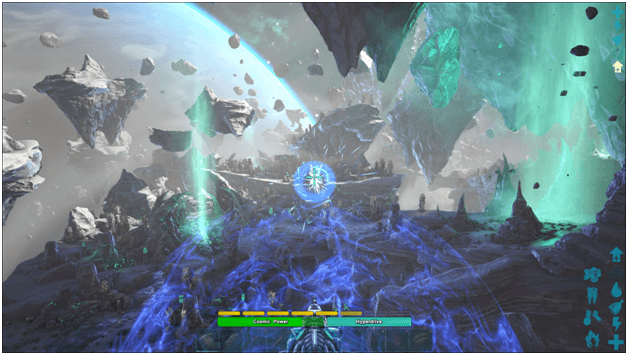 The Astrocetus is capable of warping through space, allowing it to travel across a distance and even penetrate through walls and other structures.

In order to use this ability the Atrocetus must first prepare for the jwarp and a marker is shown to allow the survivor to target where the warp will be made. 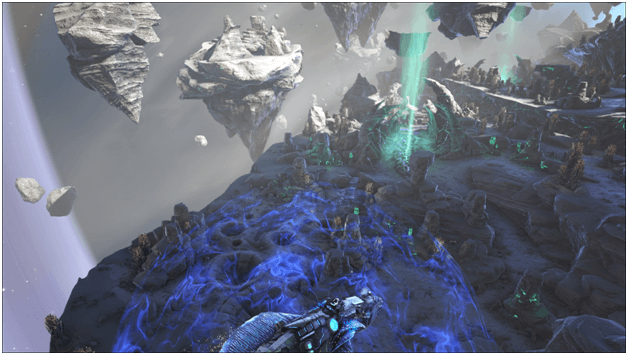 Creatures owned by the tribe that owns the Astrocetus will also be brought along with it and the radius of this is shown by the sphere around the Astrocetus. 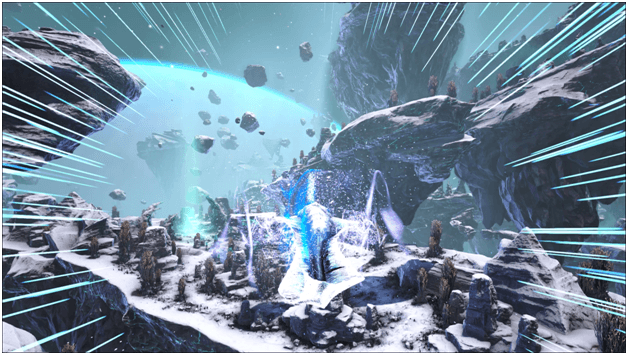 Once the ability is used, the Astrocetus will take a short amount of time before warping to the desired location, bringing any creatures along with it.

Ability has a cooldown which is shown by the bar labeled “Hyperdrive” and using it will consume Cosmic Energy which replenishes over time.

Cosmic Energy scales with the movement speed of the Astrocetus but only by a small amount. 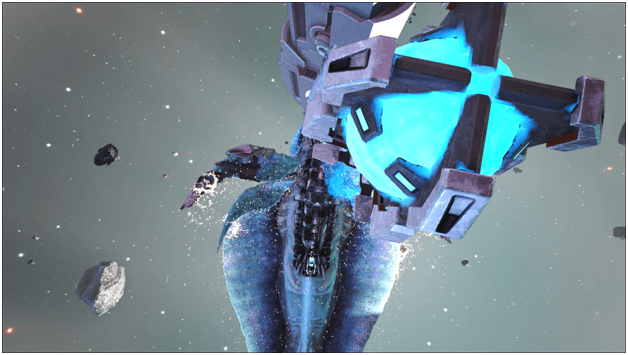 One of the Astrocetus’ deadly attacks is the Ambergris Bomb which drops an explosive down to the surface below it that explodes on impact, damaging anything caught in the radius. 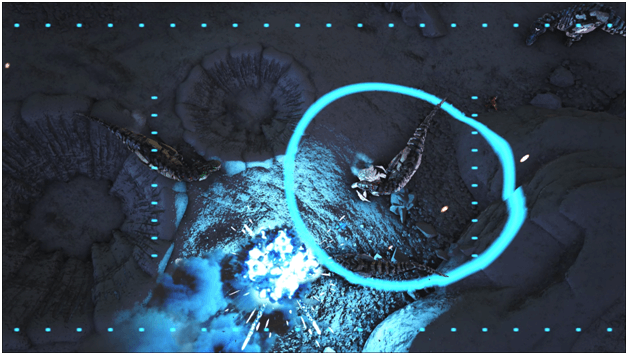 This consumes an “Ambergris Bombs” charge which is indicated above Cosmic Energy and the Hyperdrive ability bar.

There are 8 charges that may be used up at a time and each charge must be replenished over time at the cost of Ambergris. 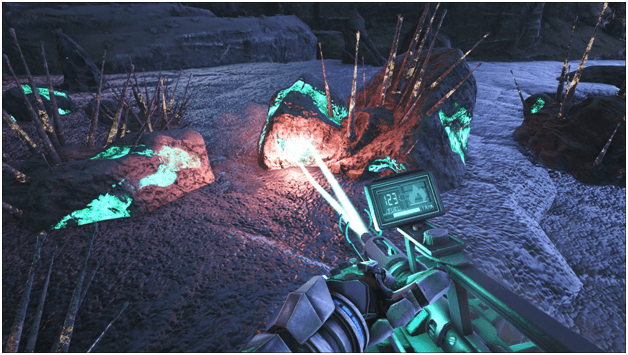 Ambergris is a resource that is obtainable from the Lunar biome by farming the rocks that have a cyan glow about them and additionally, Astrocetus will produce this over a period of time as it is considered to be their feces. 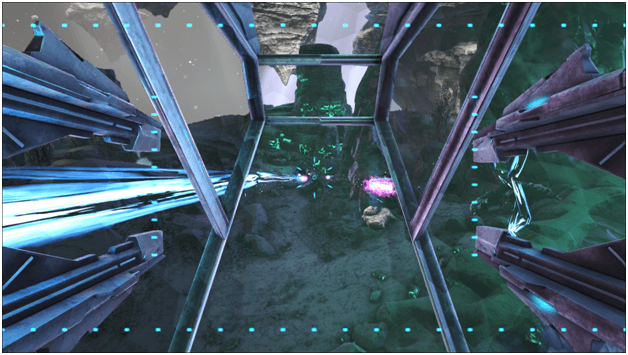 When equipped with an Astrocetus Tek Saddle, there will be 3 turrets that are usable by survivors that use element to fire projectiles.

The following turrets are available to survivors to use:

These may all be fired at the same time as long as there are survivors using them and all of these turrets are capable of damaging creatures and structures, making Astrocetus very good for raiding, providing defensive turrets have been taken care of or are blocked by tanks.

The Astrocetus has a stock of energy that it consumes to use its Hyperdrive ability which it may regenerate over time.

Cosmic Energy is tied with the Lunar biome and considered to regenerate faster when the Astrocetus is within its original biome.

While not always the strongest tank around, Astrocetus are still capable of withstanding a good amount of damage which makes up for its slow speed.

With its arsenal of several different attacks and its ability to warp to more strategic locations, the Astrocetus makes an excellent siege mount, capable of unleashing a ton of havoc to enemies and unleashing devastation upon bases.

The Astrocetus is not the fastest creature for transportation but it is one of the safest as it has several turrets for protecting its cargo and it can use its Hyperdrive ability to get around and bring creatures along with it. 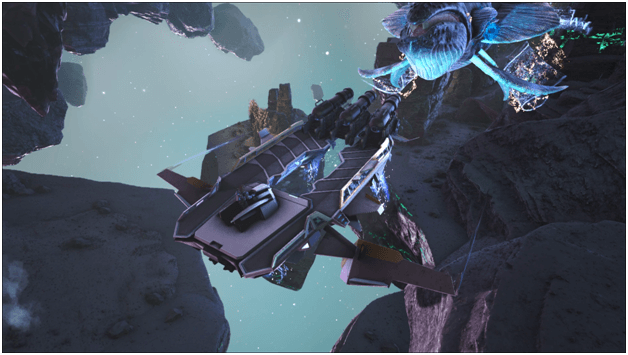 Astrocetus need to be knocked out but this can only be done with the strongest of weapons which means you will need cannons, rocket launchers or even deadlier explosive projectile firing weapons.

One of the easiest ways to tame an Astrocetus is to use a Tek Skiff which allows you to easily move around, especially in the Lunar biome.

Cannons make taming the Astrocetus and when built on a Tek Skiff, it is easy to fly around and aim at the creature.

Projectiles must hit the head in order to knock the Astrocetus out but be careful as anything else that is hit but the head may end up dealing more damage and eventually the creature’s death.

Due to the mysterious nature of the Astrocetus, it has not been figured out how these creatures mate and nevertheless flag it as unbreedable for now.

Below are the Ark Astrocetus controls 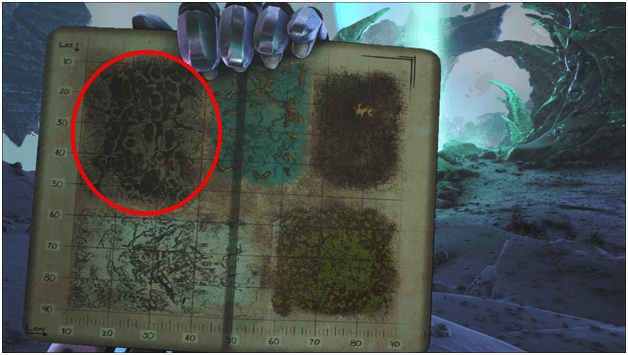 The Astrocetus only spawns in the Lunar biome within the Genesis Simulation and can be seen flying above all the destroyed surfaces.

While this creature avoids the different surfaces floating in the Lunar biome, they can still be reached depending where they are positioned and if survivors use means such as a Tek Skiff to approach them. 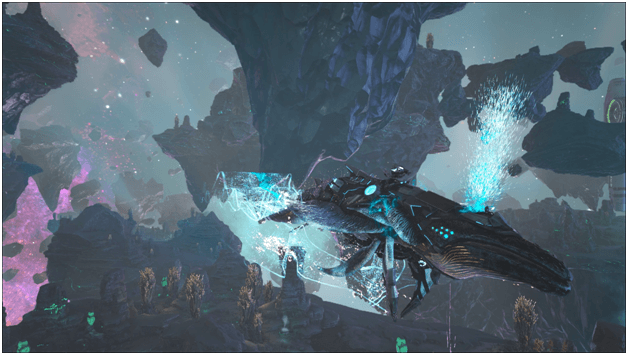 The Astrocetus is a behemoth of a creature and considered to be a Tek tier creature, making it one of the hardest to tame due to the area it exists in as well as its behavior.

These creatures may be a magnificent sight to behold but they still can be quite a danger to those that it considers a threat as it harnesses abilities that can easily lay waste to those that anger it.

Tribes that have been able to tame such a creature are known to be able to easily destroy even the strongest tribes with ease and lay waste to some of the most fortified bases ever constructed.