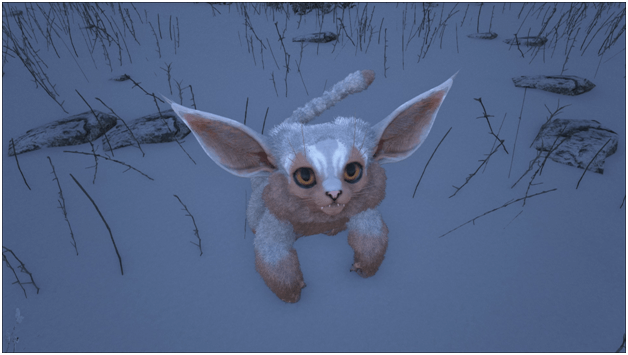 The Ferox is an adorable herbivorous creature that is found in the Arctic biome within the Genesis Simulation.

This creature is quite curious and also has a strong craving when it comes to Element as it seems to enjoy eating it.

These creatures will simply walk up to you if they notice you have Element and will stay around to see if you plan on giving it what it craves. 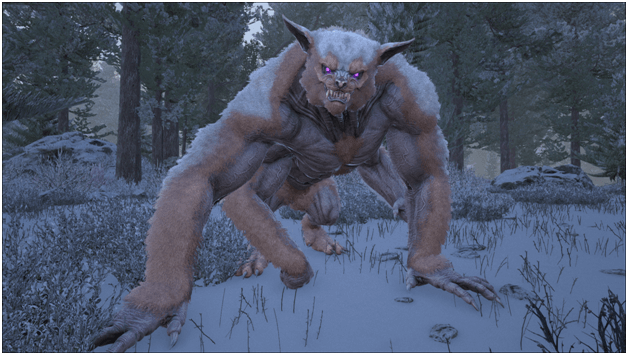 A Ferox that gets to eat Element will suddenly begin to transform into a ferocious and larger version of itself, making it change from cute to deadly within mere seconds.

These creatures once transformed will become very aggressive and are capable of killing creatures it would dare look into the eye while in its lesser form.

Tribes have found out that now only do these creatures keep them well insulated when in both forms, but the larger form can be used as a means for combat and can cause quite a ruckus. 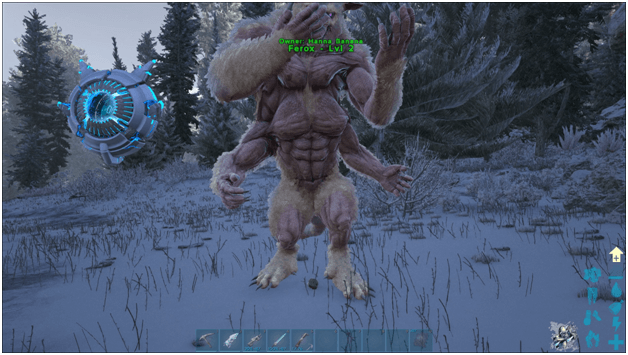 Once the Ferox has shapeshifted, it becomes a larger and more powerful creature that can be ridden by its owner, use a variety of attacks and maneuver in a very agile manner.

This transformation will last for a certain amount of time which is visible when viewing it but the duration as well as other bonuses is also affected by addiction.

To force the Ferox into shapeshifting, simply use Element that you have placed in your last item slot to feed it.

Feeding the Ferox Element is done by consuming the Element from your last item slot which becomes doable once the Ferox is nearby. 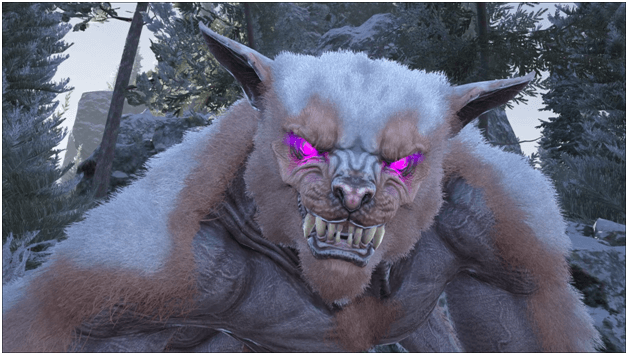 The more Element that the Ferox gets to eat, the more addicted it becomes which does have its ups and downs when it comes to the creature.

The Ferox will have a reduction in the time it stays transformed by a certain amount of time based on its addiction while gaining a boost in damage, attack speed and resistance.

With a higher percentage of addiction, the bonus stats will increase while the time it stays in its shapeshifted state decreases.

Addiction to Element is not permanent and will eventually wear off over time. 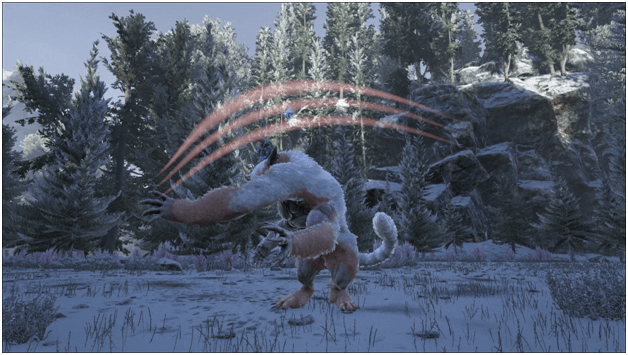 A powerful swipe from its claws deals damage to creatures in front of the Ferox which can deal a moderate amount of damage. 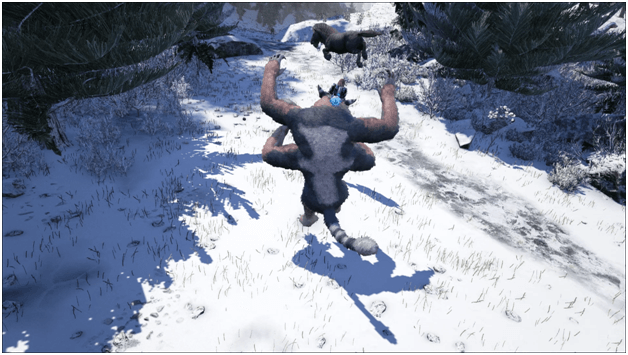 While the shapeshifted Ferox is sprinting, it is capable of pushing other creatures and even survivors out of its way, flinging them into the air or knocking them back.

To shove creatures in front of the Ferox, press: 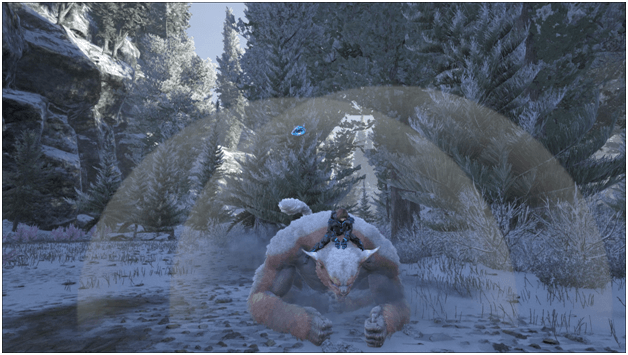 The Ferox slams the ground, sending a wave around it that deals damage to creatures that are in a certain radius. 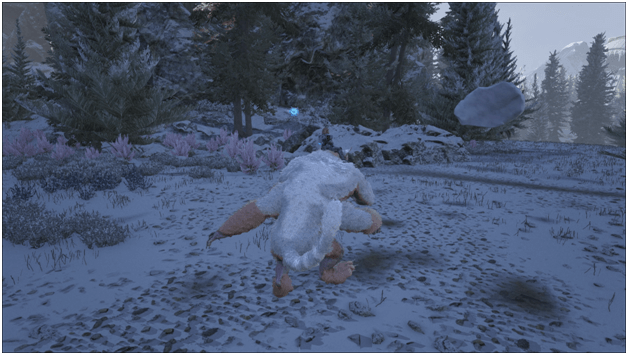 Quickly grabbing a boulder from the ground, the Ferox tosses it in the direction that its rider has it facing which can be controlled by a crosshair that will appear when holding the ability.

Even when clinging on to surfaces, the Ferox can still grab a chunk of land and toss it at the target in the same way. 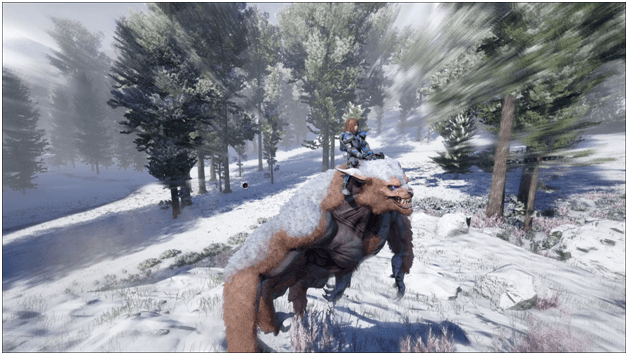 While in its transformed state, the Ferox is capable of jumping a longer distance and can use this to get over obstacles and across gaps.

Successive jumps will cause the Ferox to begin doing a boosted jump which propels it forwards faster and across a longer distance.

Boosted jumps will occur after landing from a jump or from being airborne in any other way.

Press the jump button/key in order to do a basic jump, while successive jumping when landing will cause the Ferox to do the boosted jump:

Spamming the jump button/key will guarantee a continuous amount of boosted jumps. 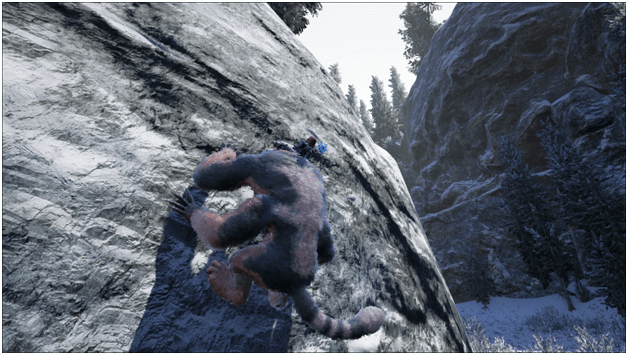 Whenever the Ferox jumps towards a surface, it can cling on to it and continue jumping and clinging after each jump.

Jumping towards a surface will automatically cause the Ferox to cling while pressing the jump button/key again will cause it to jump towards the direction the rider is facing.

While clinging, the Ferox may use its Boulder Toss ability as will as its Primary Attack.

Regardless of the weather, the Ferox is capable of adjusting the temperature the survivor has whether riding the Ferox or having it on their shoulder.

Once the Ferox transforms, it has a larger amount of health and can go head on with other creatures due to the boost it gains in health as well as its damage resistance.

By merely shapeshifting, the Ferox gains a large boost in stats while addiction to element will also improve it further as its damage and attack speed can reach impressive numbers.

In its smaller form, the Ferox makes a good companion that can keep the survivor at a good temperature while they can also use it to defend them by forcing them to shapeshift.

This creature moves very fast and can easily climb up surfaces to get a good view or reach areas that are hard to get to, making it an overall good scout with the benefit of also being able to protect itself and its rider.

Being either compact enough to bring along or set to follow in its large form, this creature can protect its owner quite well with its several attacks which can target both single enemies or groups of them.

How to Tame Ferox? 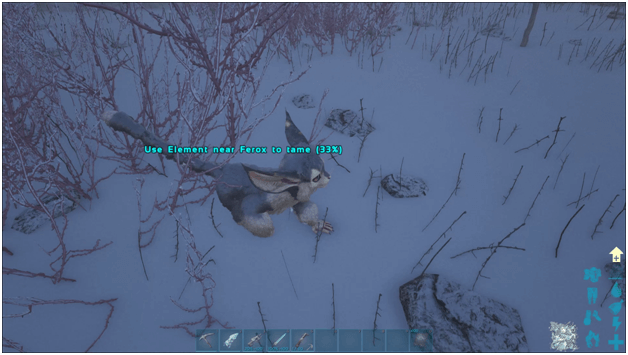 Taming the Ferox may appear to be hard at first but in fact it is simply very easy to do as all that is required is that you equip Element in your last item slot and use it when you are near the Ferox.

Element will appear usable in your last item slot when the Ferox is within range and once you use it, a short animation will occur where the Ferox is eating the Element which appears in a pinkish bright glow. 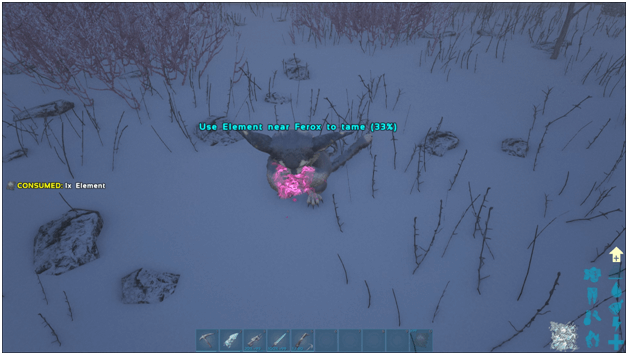 Once the Ferox has eaten the Element, it will transform into its larger self and begin to attack you before reverting to its normal form.

Each time you feed the Ferox Element, its taming bar will increase and this is to be repeated until the taming process is complete.

There are different ways to stay safe during the taming process while it transform such as: 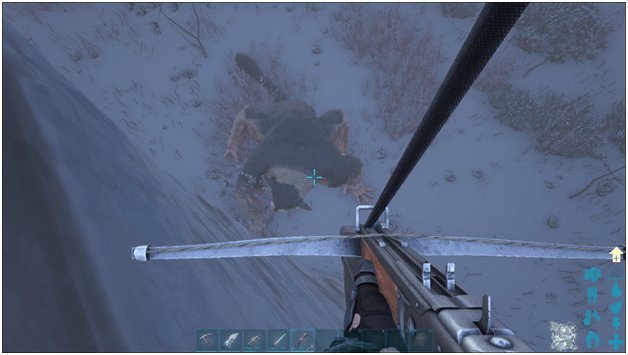 Using a Crossbow with a Grappling Hook to bring yourself to high places is considered one of the easiest and cheapest methods of taming and can help you avoid getting attacked while giving you a view of where the Ferox goes off in incase it wanders off.

Simply feed the Ferox the Element and grapple yourself to a high area such as a tree or a cliff and wait for it to revert back to normal before repeating the process. 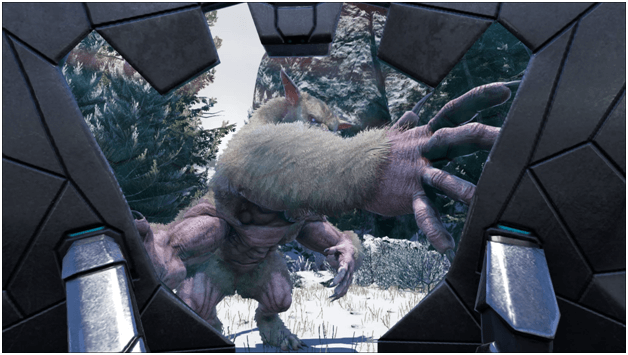 It is possible to withstand the attacks of the Ferox with a shield or two to keep eat near you which requires you to simply hold your shield and face the creature.

Bringing an extra shield or two along would be a good idea and make sure to watch out for other creatures nearby. 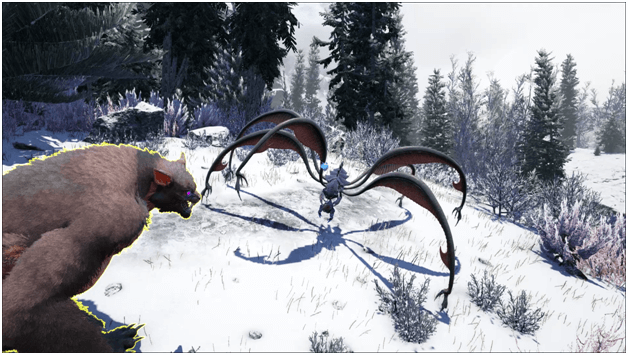 The Bloodstalker is a tame that many might go for since it spawns in one of the easiest biomes and is not that hard to tame.

Using this web to latch on to the Ferox when it has transformed will slow it down to the point where it cannot catch up to the Bloodstalker, making it easy to follow or escape the Ferox.

This creature is tamed with element but retains a herbivorous diet, feeding on berries and vegetables when hungry.

The Ferox will eat the following once it has been tamed:

The Ferox does not have a saddle in any of its two forms and doesn’t need one in order to accompany the survivor in any way.

A smaller, untransformed Ferox will sit on the shoulder of the survivor while the large shapeshifted one will be rideable. 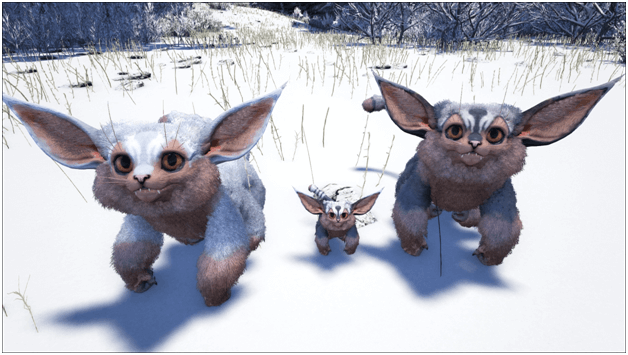 Ferox require special conditions in order to breed wherein the female must have an Addiction percentage of at least 90% or above to mate.

Once a male and female Ferox have mated under such conditions, the female will undergo gestation and will later on give birth to a Baby Ferox. 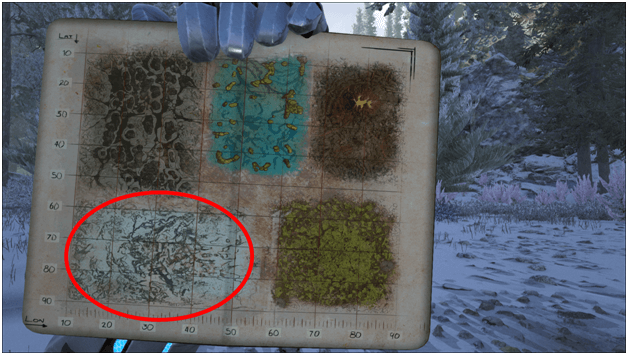 The Arctic biome is home to many Ferox and wandering around will allow you to easily find them, especially during a snowstorm.

These creatures may be hard to spot at first but bringing along a Bloodstalker to highlight them can change that.

When you have Element on you, the Ferox will curiously approach you, hoping that you give it your Element. 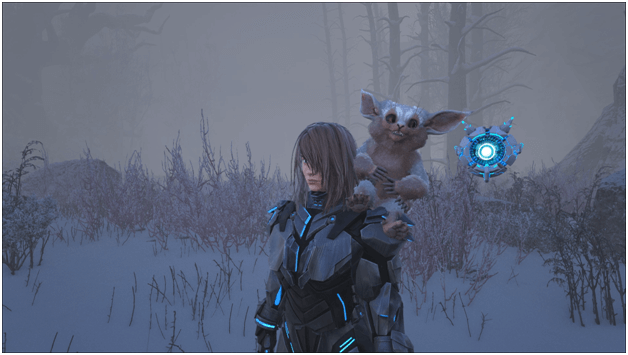 There is no doubt that this creature is quite extraordinary due to the fact that it transforms after munching on Element.

It is very compact at times since you can bring it around with you for the extra insulation and later on feed it Element when you are going to get into a rough situation. 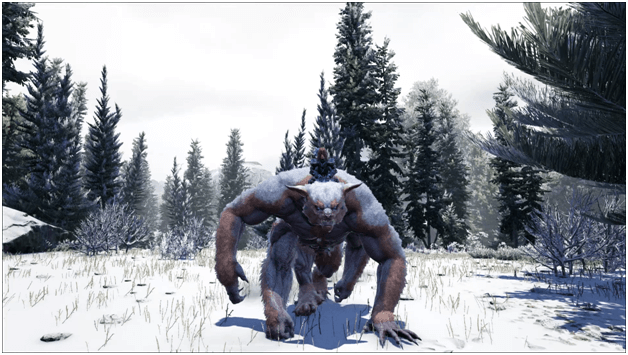 Many make a mistake of thinking this creature is harmless and end up getting pulverized so be sure to take a look out as looks can be deceiving.

Tribes can utilize these creatures as all around tames as they can travel great distances and even scale up to hard to reach places and along with their many attacks, they are quite a force to reckon with.

The Ferox may be all cute and cuddly when it is small but once it has transformed a lot of punishment can be laid out and if you don’t see creatures flying, they probably ended up dying.