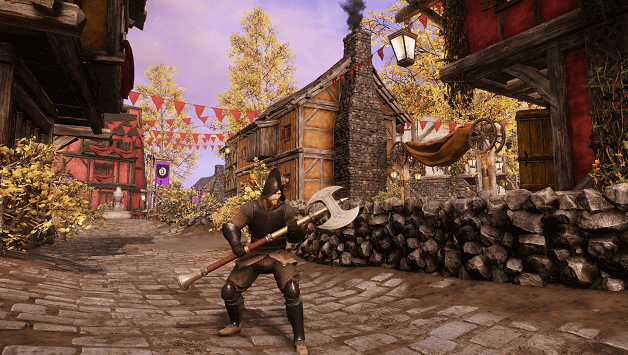 The Great Axe is a two-handed melee weapon in the New World that has a moderate attack speed and deals high amounts of damage.

Players tend to use the Great Axe due to the intense amount of damage it can deal along with its ability to pull enemies to set them up for combos.

Charge attacks from the Great Axe can deal tons of damage while the abilities are great for taking down groups of enemies.

The Great Axe is swung from the right followed by the left to perform a 2-hit combo, dealing 100% slash damage.

After a slight delay, the Great Axe is swung with more strength to perform a wide cleave, dealing 120% damage.

Holds the Great Axe back even longer before launching a greater swing at enemies, dealing 160% slash damage. 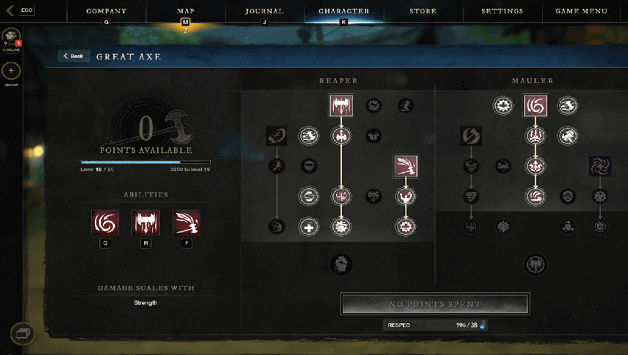 Focusing on charging onward into battle, the Reaper tree allows players to focus on gaining ground with the enemy and ensuring that they can be pulled in to be finished off.

Abilities in the Reaper tree include:

Your character charges 10m towards an enemy and deals 120% weapon damage when a target has been reached. Attacking during this ability will stop the charge and deal with the attack early.

Causes your character to extend their Great Axe forward up to 5 meters, pulling enemies towards you, dealing 110% weapon damage.

Leap in the air and perform a powerful overhead attack which deals 200% damage to enemies or 300% if they have less than 50% health.

Focuses on dealing area of effect damage and crowd control, allowing you to hold enemies in place and deal multiple instances of damage in an area.

Causes you to spin and attack nearby enemies, dealing 50% weapon damage with an additional spin when an enemy is hit. (Maximum of 4 spins)

Your character does a fast spinning attack that pulls enemies towards you, dealing 110% weapon damage.

Swings upwards, dealing 99% weapon damage, which creates a vortex that pulls enemies within 10 meters for 3 seconds.

125% burst weapon damage is dealt with when the vortex ends.

The Great Axe relies on the Strength attribute, being a strong and heavy weapon that it is, also gaining benefits from passive bonuses.

Such passive bonuses include an increase to your light and heavy melee attacks as well as later on being able to deal more stamina damage.

Higher amounts of the Strength attribute will increase damage to debuffed enemies and later on improve stamina regeneration when attack and also gain GRIT on attacks.

The Great Axe is a high damage dealing weapon and the tradeoff of having reduced attack speed for heavy damage can be quite exceptional with the right timing.

Even without the proper timing, users of the Great Axe can easily do combos due to the GRIT gain chance provided by some skills as well as later attribute bonuses.

Using this weapon allows you to charge head-on and attack enemies with brute force, perfect for those who like to tank damage and dish out even more in return.