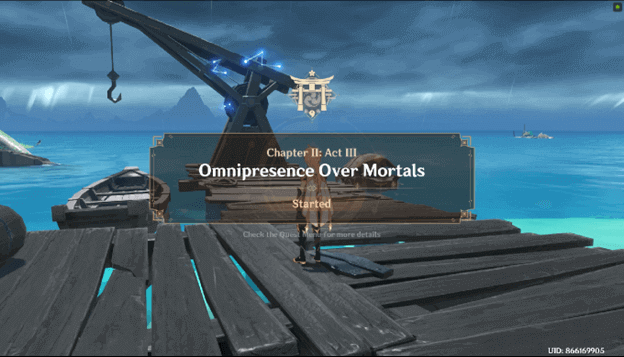 This is the beginning of Chapter 2 Act 3 Omnipresence Over Mortals Quest, where you have a new mission to go through led by Sangonomiya Kokomi.

During this quest, you will be accompanied by Teppei to the Watatsumi Shrine to talk to Sangonomiya Kokomi and you will be given a high position to lead its territory.

To prove that you can handle your territory, they will give you a test where your fighting skills can be seen.

How To Get Sword, Fish, Resistance?

The Sword, Fish, Resistance quest will be available once you have reached Adventure Rank 30 and you must complete Chapter 1 Act 2 Stillness, the Sublimation of Shadow. 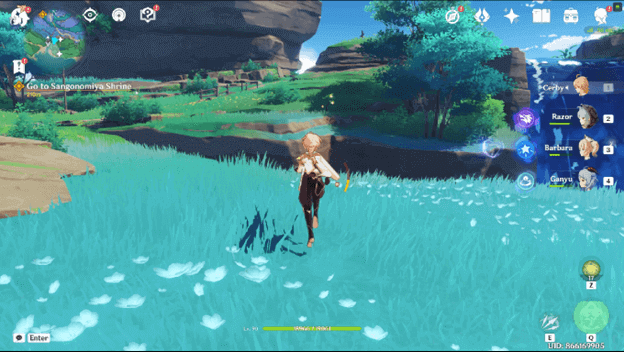 1) Go to the Agreed Location and Meet Teppei

Head to the dock which is located north of Fort Fujitou and speak with Teppei to find out where you’ll need to go to meet Sangonomiya Kokomi.

2) Go to the Resistance Camp

Take the nearby wave rider and sail over to Watatsumi Island, then go to Bourou Village and speak with Teppei.

Use the teleport and go to Sangonomiya Shrine waypoint and head up to the stairs to initiate a cutscene with Sangonomiya Kokomi.

She tells you that due to your reputation she’ll appoint you to Captain of the Swordfish II which is a group of elite soldiers from the Sangonomiya Resistance.

4) Go to Where Swordfish II is Stationed

Use the teleport and go to the Statue of the Seven Electro on Watatsumi Island, once you are there follow the yellow objective mark and glide to the bottom.

5) Speak to the Members of Swordfish II

Once you are at the Bottom, head over to the Provisional Squad Leader of Swordfish II to initiate a cutscene.

The current captain won’t be so willing to hand over the title until you have proven yourself and the Squad Leader gives you an objective.

6) Clear Out the Nearby Monsters

After the conversation with the Squad Leader, Glide down the area behind them and defeat all three Ronin enemies.

7) Speak to the Members of Swordfish II

Once you have taken out the enemies, Speak with Koutoku to be officially appointed as Captain of the Swordfish II.

8) Go to the Area Threatened by Monsters

Now that you have proven yourself, travel to the southeast corner of the island to initiate a cutscene with Koutoku.

You will have to clear out the ronin and two camps that cause issues on your squad, and the Traveler does it on his own.

9) Clear Out the Nearby Monsters

10) Speak to the Members of Swordfish II

It seems that Paimon is worried about you and asks you if you did hurt in your last fight, then suddenly Yoshihisa will interrupt your conversation.

Koutoku will report to you that the entire area is all secured, and you have to go back to Kokomi to check what your next objective is.

11) Return to Headquarters and Talk to Sangonomiya Kokomi

Return to Sangonomiya Shrine and speak with Kokomi and you will find out that Teppei has been sent on a special assignment.

Finally, Sangonomiya has given you a special mission and you will wait for Teppei at the training grounds.

After you have completed the Sword, Fish, Resistance quest, you will receive Adventure EXP, and Mora. 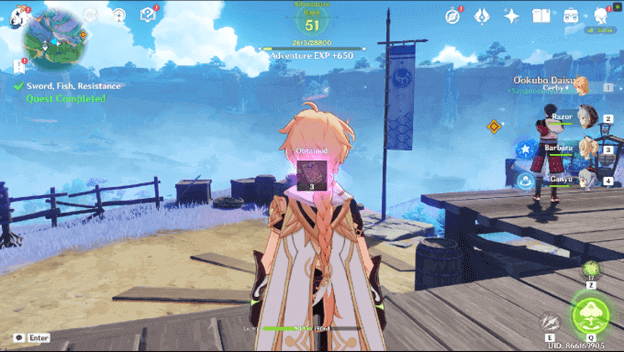 Finally, you are now a Captain of the Watatsumi Island special operations unit: Swordfish II and you have to protect your territory from the Vision Hunt Decree for the good of the resistance.

Thanks to your actions because you proved that you deserve to be a Captain to protect the resistance against any kind of enemies.

In your new journey, you have new missions to go through and you have to be ready for anything that can happen next.