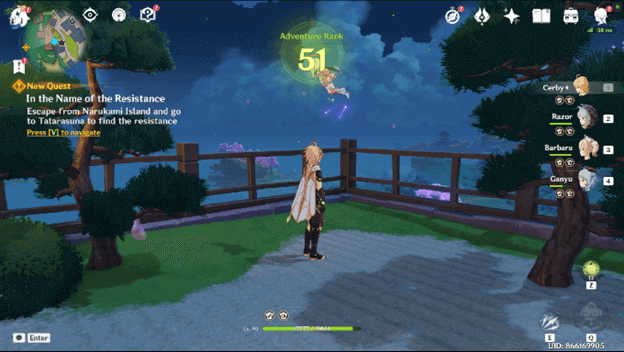 After you have previously managed to escape Inazuma City and fought against the Raiden Shogun, now you will have to go to Tatarasuna to find the resistance.

During this quest, you will have to explore and find the encampment of the Sangonomiya resistance and join their group.

You will also encounter the Shogunate army, and you must have to defend the side of the resistance to bring justice.

How To Get In the Name of the Resistance?

In the Name of the Resistance quest will be obtained once you have already finished the Amidst Stormy Judgement quest.

In the Name of the Resistance Quest Objectives 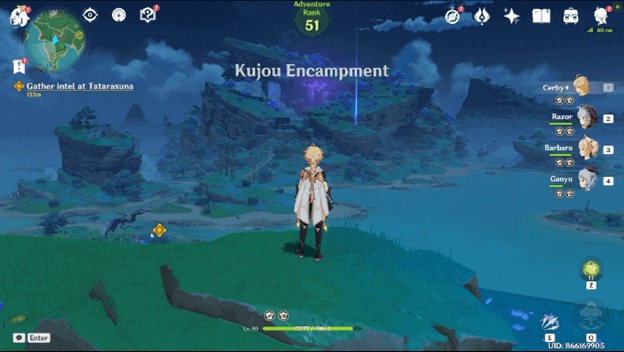 For this quest, you will have to contact the Sangonomiya Resistance to help back you up now that you are on the Wanted List.

Use the teleport and go to the Statue of the Seven Electro, once you reach there follow the yellow path objective.

As you get close to the two guards it will trigger a cutscene, you will hear the chats of the two guards that are on patrol now whose you are now on their Wanted List.

Head up to and jump down to the beach to the southwest and you will see a pair of guys talking about how they managed to escape from the warzone.

3) Hurry to the Front Line

You will need to go all the way west across the entire Tatarasuna Island, head south from there, and follow the yellow objective path until you reach your destination.

Once you get to the marked area in Nazuchi Beach, you will see a pair of enemy guards standing over another NPC.

You will have to save the resistance soldier from the two enemy guards that are harassing him and use your elemental skills to defeat them.

5) Talk With Members of the Resistance

After you have defeated the enemies, the guy will be thanking you that you’ve saved him, and he introduced himself named Teppei.

He also escorts you until you get to their camp and meet their General whose name is Gorou, he also mentions that you are immune to the Vision Hunt Decree.

Teleport to the Statue of the Seven electro in the Higi Village and follow the yellow path objective until you reach the marked object.

Once you get there, head over and talk to Gorou and a cutscene will play. Teppei will tell Gorou about what happened to him and that you saved him from the Shogunate Samurai.

You also tell him that you have fought with the Raiden Shogun, and they have added you to their Wanted List.

Teppei will take you on a small tour of their camp, and you are starting at their field hospital to look after their friends who are recovering.

8) Give Materials that Can be Used as Medicine

During this scene, Teppei will ask you which kind of medicine he should make and ask you for an ingredient.

You can either give him a Wolfhook from Mondstadt or give him an Onikabuto which is an ingredient here in Inazuma.

Head towards the south until you reach the yellow objective marker, and you will find a pair of soldiers.

10) Demonstrate Archery Techniques to the Resistance

These guys are archers, and they want us to teach them, swap to any bow user and now you will need to destroy 20 blue targets in less than 90 seconds.

After you have taught the techniques to the resistance, some enemies will do a sneak attack on the encampment, and you will have to defeat them all.

13) Repair the Walls Around the Encampment

Head over to the collapsed wall and interact with the “Repair Button” to fix it once you’re done a cutscene will be played.

Go to the front lines by heading to the east and once you are across the beach you will see Gorou and Kujou Sara with their comrades, as you approach them, a cutscene will play.

You’ll have to fight the three enemies which consist of a 1v1 situation, once you have defeated them all, a long cutscene will be played.

It will have a great fight between the two rival groups, we also meet a new character in this scene which is Sangonomiya Kokomi and she is on the resistance side.

In the Name of the Resistance Rewards

After you have completed In the Name of the Resistance quest, you will receive Adventure EXP, and Mora as well as additional rewards. 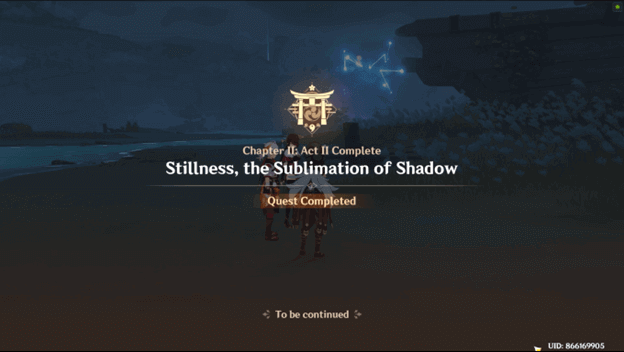 Finally, if you are on the side of the Sangonomiya Resistance, you will now be able to fight against the Raiden Shogun to repeal the Vision Hunt Decree.

It appears that Kazuha and Beidou will also join the Resistance, and you also meet the organizer of the resistance, the Divine Priestess of Watatsumi Island which is Sangonomiya Kokomi.

For now, you will have to discuss a plan with Sangonomiya Kokomi on Watatsumi Island and Teppei will escort you there once you are ready.