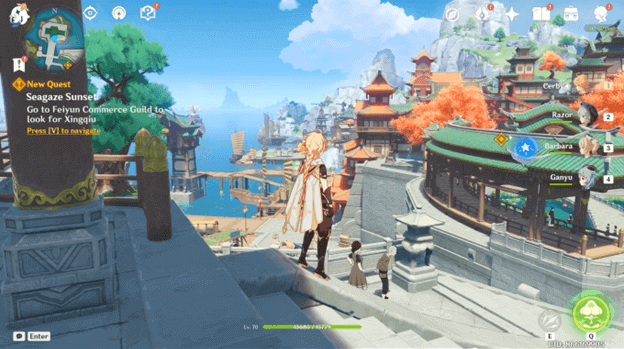 After you listen to Ningguang’s speech in the previous quest where she starts a contest to rebuild the new Jade Chamber, you have decided to join in.

During this quest, you start looking for the materials where you can find them in Mt.Tianheng and Shenhe shows up to help you in your search.

You will enter a Domain where you have to find the rare Sunset Vermillionite but first, you will need to defeat the enemies within.

How To Get Seagaze Sunset?

The Seagaze Sunset quest can be obtained once you have completed the Jade Chamber Rising quest and meet Shenhe. 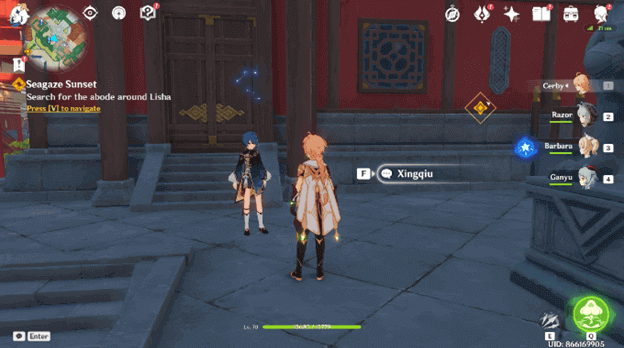 1) Go to Feiyun Commerce Guild to Look for Xingqiu

Go to the main plaza of Liyue Harbor near the souvenir shop, once you have reached there, head over to Xingqui and speak to him to trigger a scene.

Xingqui will tell you where you can search for the rare Sunset Vermillionite which you can find in the Sea Gazer’s abode.

2) Search for the Abode Around Lisha

Use the teleport waypoint and go to the southeast of Mt.Tianheng and glide down to the lake southwest to initiate another scene.

Once you have spoken with Shenhe, she will remove an adepti art which will reveal a hidden location and a Seelie will appear.

Make your way and follow the Seelie until you have reached the waterfall that leads to the Sea Gazer’s Abode.

Interact with the Sea Gazer’s Abode and enter it, and a Domain Entrance will appear on the screen, tap the “start” to enter it.

Once you are in the Abode, Shenhe will tell you that you have to destroy the mechanism that is maintaining the adepti art.

5) Activate the Seal on the Ancient Array Core

There are 3 yellow objective markers that will appear on your screen, and you will be tasked to activate the seal on the Ancient Array Core.

Start by lighting up the three Geo Lamps indicated by the quest marker, you must destroy and pick up the Geograna from Geo rocks by hitting it with a Claymore user or melee attacks.

Once you have obtained the Geograna, approach a nearby Geo Lamp to light it up. When all three have been lit up by Geograna, slimes will spawn beside the Ancient Array core.

After you have defeated the enemies, you will need to destroy the Ancient Array Core so another cutscene will be played.

7) Land Safely on the Next Level of Clouds

Once you have destroyed the first abode’s barrier, you will be dropped from above and you have to use your glider to avoid losing your health.

When you fall from the above, enemies will suddenly appear and you have to defeat them to unlock the Ancient Array Core and destroy it again.

When the Core reaches half of its life, the Stonehide Lawachurl will appear and you need to defeat it so you can continue to destroy the Ancient Array Core and play a scene again.

Paimon will tell you that you are going to fall because of breaking the Ruin Guard’s abode barrier.

Follow the yellow path objective until you reach a wall with a strange pattern on it and interact with the walls with patterns on them to reveal a hidden room behind it.

When you reach the third abode barrier, an enemy will suddenly appear and you have to defeat all of them.

Once you defeat them all, you can destroy the Ancient Array Core and when it reaches 75% of its health the Geovishap will suddenly appear.

You must defeat it to continue destroying the Ancient Array Core once you destroy it a cutscene will be played again.

12) Search for the Sunset Vermillionite

Follow the Seelie to obtain an Exquisite Chest, then follow the quest marker to the Sunset Vermillionite, which will prompt a dialogue with Shenhe and complete the Domain.

13) Return to the Jade Chamber Worksite to Look for Shenhe

Once you are done in the Domain, teleport to the Golden House and walk down the path to find Shenhe talking with her Secretary Baiwen.

The Traveler and Paimon approach and Baiwen praise you for bringing the finest Plaustrite to them for the Jade Chamber.

Baiwen will leave and you’ll want to travel east with Shenhe to find a small shack that she will use for some much-needed rest.

15) Talk to the Hotel Owner

Head over to the hotel and talk to the owner named Ju’an, he tells you that they have a vacant room to stay in.

After you have left Shenhe in the Hotel, climb off the rocks behind it and speak with the Cloud Retainer to learn more about Shenhe.

Use the clock in the menu button to Fast forward the time anywhere past 8 am, then a cutscene will be played.

After you have completed the Seagaze Sunset quest, you will receive Adventure EXP, Mora, and other additional rewards. 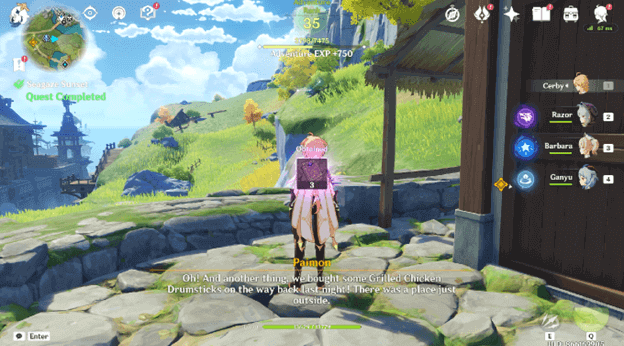 After you have successfully defeated the enemies in the domain you were finally able to find the rare Sunset Vermillionite with Shenhe.

It appears in the story of Cloud Retainer that Shenhe is also an Adepti who is a very special human because she has a hidden strong power.

Now you will return to the building site where the Jade Chamber will be built to ask Ningguang’s helper and to ask what the progress is going.