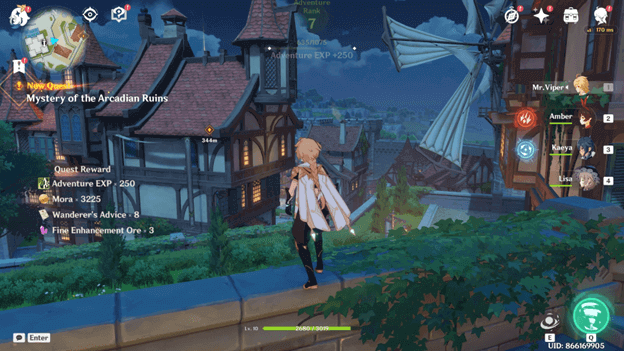 In this quest, will be heading to the Whispering Woods to meet up to get black market intel from an informant that Kaeya has connections with.

The intel that will be provided from the informant will be vital in your search for a treasure that Kaeya has mentioned during the Kaeya’s Trouble quest.

During the quest you will need to obtain the intel so you can continue your search for the treasure and may even save someone’s life along the way.

How To Get Mystery of the Arcadian Ruins Quest?

The Mystery of the Arcadian Ruin’s quest is the second part of Kaeya’s Story Quest in Pavo Ocellus Chapter: Act 1. You obtain this quest after you have completed the Kaeya’s Trouble quest. 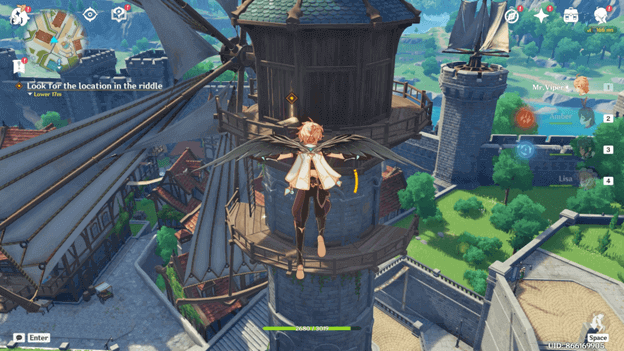 1) Meet with the Informant at the Designated Location

As you begin the quest, you will need to head out and make your way to the Whispering Woods to meet up with to get black market intel from the informant.

You can get there faster by using a Teleport Waypoint nearby to save time from running all the way to the Whispering Woods.

2) Defeat the Opponents Attacking the Informant

As you reach the Whispering Woods, you will see the informant running for her life as she is being chased by Hilichurls.

You will need to defeat all of the Hilichurls chasing after her before you can speak about the black market intel.

3) Talk to the Informant

The informant, later known as Vile will thank you for saving her life and will give you the black market intel for free as a reward.

Vile will reveal a riddle which is “Three six-armed giants reside in the city in the lake. Two guard the statue, one, the treasure.”

She will also give you a map (which is a picture) that shows a clue where a chest may be found.

At this point, you can either head over to Kaeya to get a clue and discuss what the riddle means or you can simply head to the chest yourself.

The chest will be located on the windmill in Mondstadt, which you can reach by Climbing and/or Gliding to the top.

5) Look for the Location in the Riddle

After you talk to Kaeya, you will have learned about where the location will be based on the clues in the riddle..

You’ll see a windmill nearby which you have to climb or glide to and open a common chest which contains another map and riddle.

A cutscene begins to play and Paimon reads the riddle, later on saying you could get help from Kaeya.

The riddle reads “She doesn’t love him at all. The passion rushing through the clear spring is just a front. When she’s cold and alone, her true heart is revealed.”

Once again, you have the option to go back to Kaeya and get the answer to the riddle or you can head figure it out on your own.

The location of the next chest can be found on a cliff near the waterfall in Springvale, which requires a character with Cryo to solve.

Since you have Kaeya in your party already, you will be able to use him for this.

7) Look for the Location in the Riddle

Use the teleport waypoint to get close to Springvale and head to the waterfall where you will need to reach the top of a cliff.

There will be enemies nearby and you can clear them out before solving the riddle, which requires you use a Cryo type attack to activate three Elemental Monuments.

Once the Elemental Monuments have been activated, an exquisite chest will appear and you need to open it up to get a picture of a map.

Mystery of the Arcadian Ruins Rewards

After you have completed the Mystery of the Arcadian Ruins quest, you will receive Adventure EXP, Mora and other rewards.

Additionally you will receive: 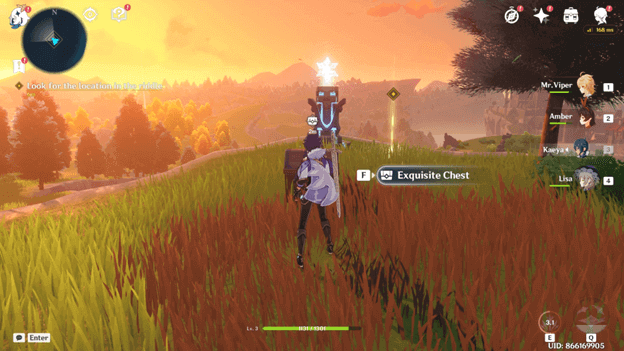 After solving a bunch of riddles and running around the map, you will have finally found the Treasure Map which shows the location of the treasure.

This quest can be completed with or without the help of Kaeya but getting help from him does provide waypoints to easily find the locations.

Once this quest has come to an end, the Kaeya’s Gain will immediately begin, allowing you to continue your treasure hunt.

How to Get Dvalin’s Sigh in Genshin Impact