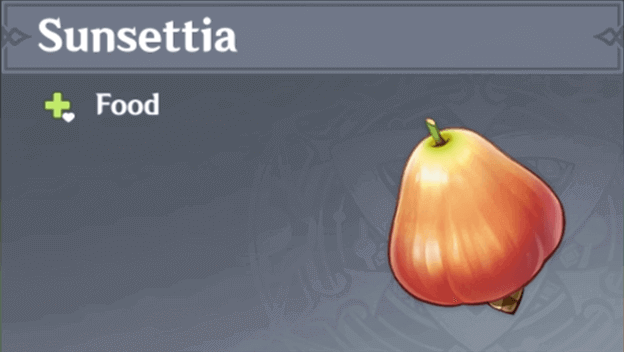 “A plump fruit, beautiful like the sunset, that is abundant across all of Teyvat. It has a curious, sweet aroma and is able to energize an individual. ”

Sunsettia is a type of fruit that you can obtain, which you may encounter in the earlier quests in Genshin Impact which  can be consumed or used for crafting .

You can easily get the Sunsettia in most areas of the map, which you can use to heal your character early on in the game.

Sunsettia can be mostly found in the areas of Galesong Hill in Dadaupa Gorge and also quite a few areas in Starfell Valley such as around Starfell Lake. 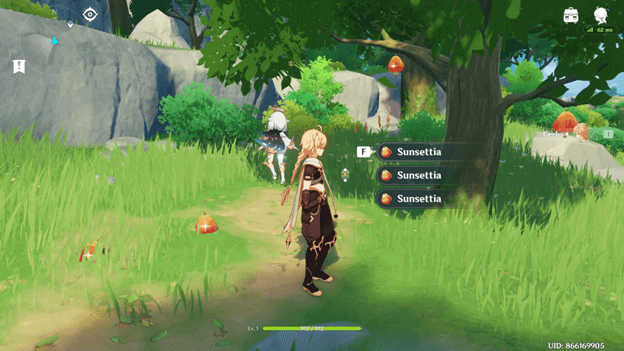 There will be Trees that you can find in most of the areas in the map, which can be picked easily by attacking the trees. A good way to spot these trees is to look for Sunsettia that has fallen to the ground, which may be picked up once approached.

Sunsettia can be consumed to recover 300 HP of a character that consumes it, making it a good way to heal them early on in the game.

You can also use Sunsettia to craft important items later on in the game along with the use of other ingredients that you find.

The following are the current items that you can craft with Sunsettia:

Sunsettia’s is one of the easiest fruits which can be found in Genshin Impact, making it an abundant resource that you can find.

You will usually encounter this fruit when roaming the wild and can get quite a bunch every now and then when you pick them up after hitting the trees.

They are for restoring health when you do not have any recovery items and come in handy for crafting Red Dye which is an important resource for crafting Furnishings.

How to Get Dvalin’s Sigh in Genshin Impact