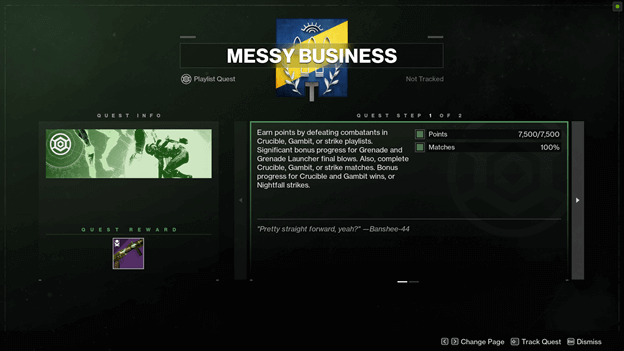 The Messy Business Quest is obtained by speaking with Banshee-44 and will require that you accumulate a specific amount of points and complete a percentage of matches.

Upon completion of the tasks, you are to be rewarded with the Salvager’s Salvo Legendary Grenade Launcher.

You can obtain this quest earlier on when you first start and complete it as you do other activities in Destiny 2. 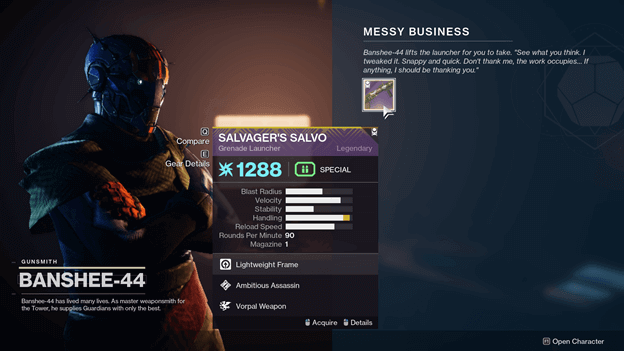 You will need to achieve points by participating in Crucible, Gambit, or Strike playlists, each of them being more fun or easier based on your preferences.

Many have found Crucible to be faster, while Gambit is a more rewarding but longer activity and Strikes to be a bit in between depending on your team.

You will eventually complete this without focusing on its objectives too much and may come back later to get it if it is not a priority.

Speak To Banshee-44 At The Tower

Head over to Banshee-44 after you have completed the first step and you will be able to instantly obtain the rewards from him.

If you cannot find Banshee-44, simply head to the Courtyard and move to your right or track the quest by selecting it from the guest tab.

Tracking the Messy Business quest will put a waypoint marking Banshee-44’s location once the first quest step is completed.

For those who are searching for a way on how to get Salvager’s Salvo, this is the main way to get the Legendary Grenade Launcher.

Upon completion of this quest, you will be rewarded with the Salvager’s Salvo, a Legendary Grenade Launcher.