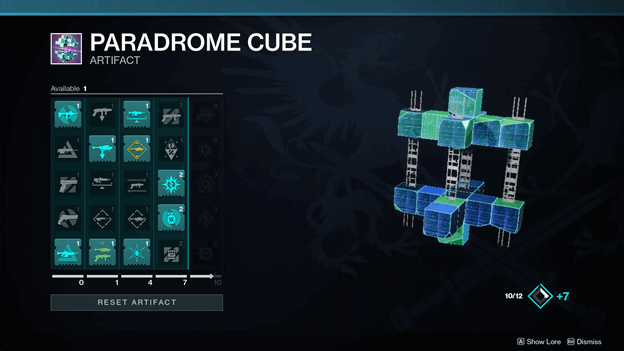 Every Season in Destiny 2 provides you with several new goodies to make your combatant slaying XP a fabulous one.

One of these essential goodies is a Destiny 2 Artifact, which varies between each season, and in the Season of the Splicer, the new Artifact is the Paradrome Cube.

The Paradrome Cube can be obtained easily once you start your path after landing on Europa which leads you to a new quest to get the Season of the Splicer Artifact.

The Paradrome Cube, also known simply as Season of the Slicer Artifact is known to be “A Cube Of Living Code Claimed From The Vex Domain.”

Judging by the ingame lore of the Paradrome Cube, it allowed Mithrax to see into possible futures where he noticed gunfire of the Guardian in the Tower.

Since there was no ripple in the liquid, he dismissed the vision but soon had many more which started in the hundreds and even reached thousands.

Once in your inventory, it is shared amongst your other characters, and depending on which mods you put points in, you will be able to modify your gear with them.

How To Get The Paradrome Cube?

A quest called The Splicer must be completed, which does not take too much time and will, later on, unlock the quest named Beneath The Great Machine.

To complete the said quest, all you need to do is visit the Last City and speak to the Splicer Servitor at the H.E.L.M. to be rewarded with the Paradrome Cube.

How To Level Up Paradrome Cube?

Leveling up the Season of the Splicer Artifact is not that hard and all you need to do is gain XP, which causes the Paradrome Cube to level up.

Completing Seasonal Challenges is a great way to level up your Season of the Splicer Artifact, as the challenges reward a good amount of XP.

As you level up your Artifact, you will have access to certain mods which you can place points into, allowing you to equip your weapons and armor with them.

Season of The Splicer Artifact Mods

Each time you level up your Season of the Splicer Artifact, you will gain a point that you can place into mods when previewing your Artifact.

Placing a point will allow you to craft the mod and equip it into a specific piece of gear, granting you better passives.

The following are the tiers and mods of the Season of the Splicer artifact.

The Paradrome Cube is a powerful tool and provides you will many great mods, several of them focusing on disrupting enemies or blowing them up.

It would be a good idea to make use of the Rocket Launcher or Grenade Launcher mods to power up weapons of that type.

You can easily level up your Artifact in no time by simply playing the game, but focusing on Seasonal Challenges can help maximize it early on.