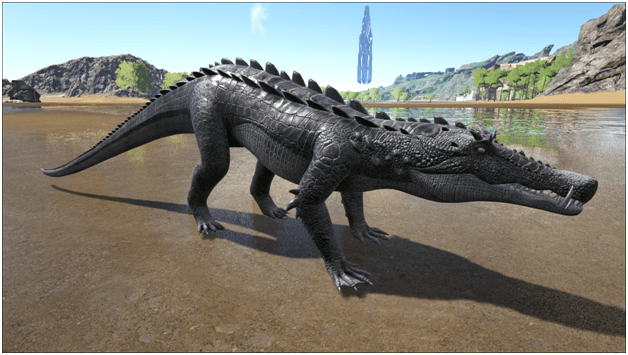 Kaprosuchus Paludentium is a very aggressive carnivore that appeared in the late Cretaceous period.

Kaprosuchus have long pointed snouts that they use for grabbing and dragging its prey into the water.

Kaproshucus have the habit of wandering around swamps, awaiting to leap towards its prey and snag them for dragging into the water to drown or killing them on the spot to turn them into a meal.

A questionable decision is for a human to approach these creatures willingly but for some who wander the swamps carelessly and get into striking distance of the Kaprosuchus, a certain horrific death awaits.

Tamed Kaprosuchus in battle are a terrible sight to see, lunging and snatching riders off of their mounts or picking off smaller creatures to exhaust and kill. 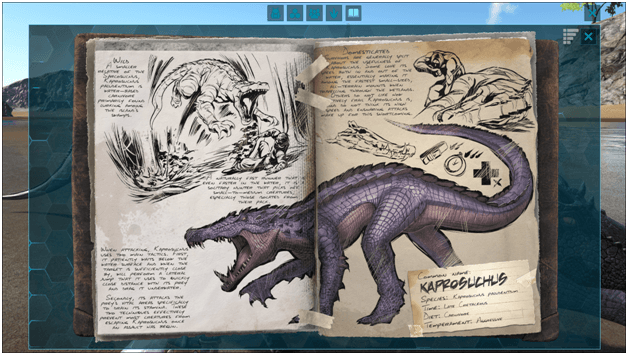 The Kaprosuchus is the smaller cousin of the Sarco but being smaller actually makes them more dangerous, able to lunge and grab its prey even or chase them on land to hold them down and until exhausted.

Very vicious yet patient creatures, able to wait for the best opportunity to pounce at their prey to drag them into the swamp all the while weakening its victim.

Kaprosuchus are arguably more trouble than their worth to tame, but tribes that are known to have them in their camps are usually avoided by other tribes. 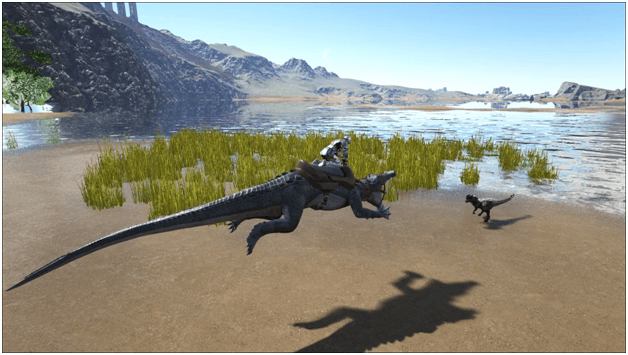 Kaprosuchus are able to lunge forward and grab creatures off of the ground or water and even snag survivors off of their mounts. 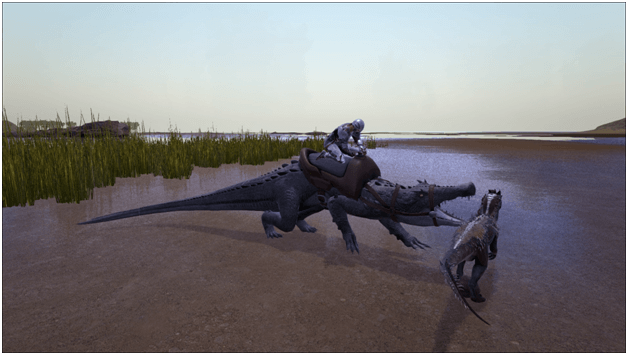 The Kaproshucus grabs a small creature or a human in its jaws which it can then hold on to and carry around.

The attacks of the Kaprosuchus can drain stamina equal to 2x the damage that it has done with its either its normal attacks or special abilities.

Creatures or survivors that have been grabbed by either of the Kaproschucus’ abilities will have their stamina drained over time.

Kaprosuchus are great defenders when getting resources in the swamps to fend off deadly swamp creatures even its larger cousins the sarcos.

With the ability to grab onto an enemy with its bite ability, the Kaproshucus can hold onto an enemy so that it can be knocked out easily, preventing the chance of escape..

The Kaproshucus is able to grab riders off their mounts to give the opportunity of taking creatures or survivors out easily.

With its ability to  grab enemies and hold on to them, this allows tribes to make use of the opportunity to kill the grabbed creatures.

Enemies on mounts can easily be taken down for to be killed, separating riders and creatures to reduce efficiency during fights. Kaproshucus are very fast and should be avoided head on or they will drag you off and most likely kill you which makes using a Bear Trap a safe method for taming them.

Once you see a Kaproshcucus from afar and wish to tame it, set a Bear Trap between you and the Kaproshcucus so that it will later on step on it once you get its attention.

Shoot the Kaproshucus from afar and make sure the Bear Trap is between you and the creature while you move backwards until it gets caught in the trap.

Once the Kaproshucus is trapped, you and any other tribemates that are with you can now easily knock the creature out.

Be careful when it is heading for you when the trap is between you and the Kaproshucus and make sure to move backwards or it may lunge towards you, avoiding the trap and turning things around. 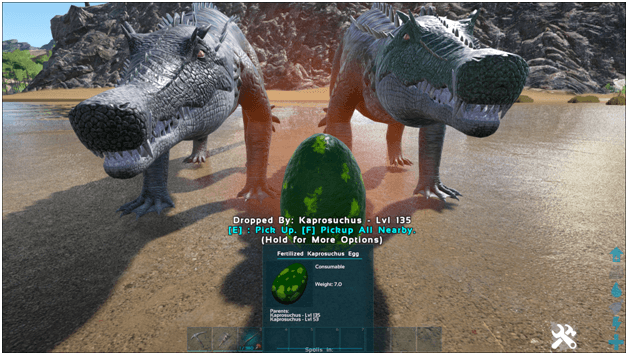 A Kaprosuchus will drop a green colored Fertilized Kaprosuchus Egg with lime green spots after mating.

Kaprosuchus are usually seen in the swamps, roaming  in shallow murky water and rarely on the beaches around it.

Maps where there are Kaprosuchus:

The following are spawn maps where the Kaprosuchus can be found 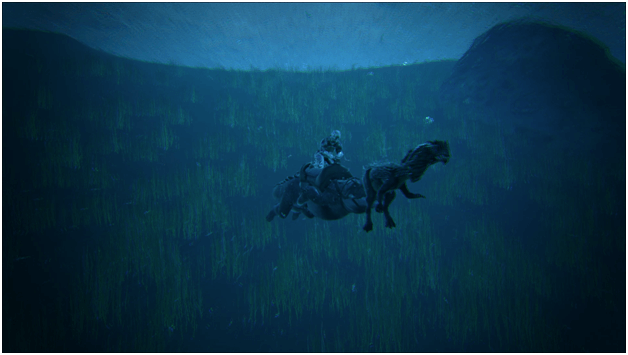 Kaprosuchus are one of the main reasons why humans avoid the swamps, for those who navigate the swamp lands by the time they see the Kaprosuchus it’s probably already too late for them.

A truly frightening experience, getting dragged by the Kaprosuchus to a slow and painful death makes people debate on taming these ferocious predators but once tamed they can prove to be very beneficial for any tribe.

Being able to viciously restrain any creature that it can hold in its jaws, make these great hunters useful mounts to have.