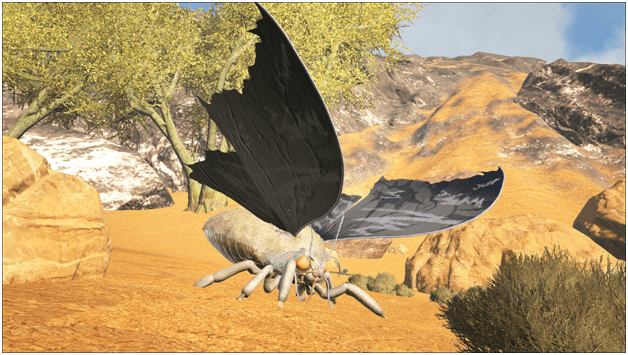 The Lymantria Sporarmis is an insect-like herbivore that appeared in the Holocene Epoch that has an evasive temperament.

Lymantria are ancient moths that are very large, almost the size of a human but retains most features of modern day moths.

Wild Lymantrias are usually seen near bush groves in the desert, eating berries and at the same time pollinating them.

Humans can approach the Lymantria without fear of being attacked unlike most creatures but the Lymantria will fly away if threatened, leaving behind spores to impair anything nearby.

Once tamed, these creatures are used for slowing down creatures using its toxic spores to assist in taming or hunting wild creatures or enemies. 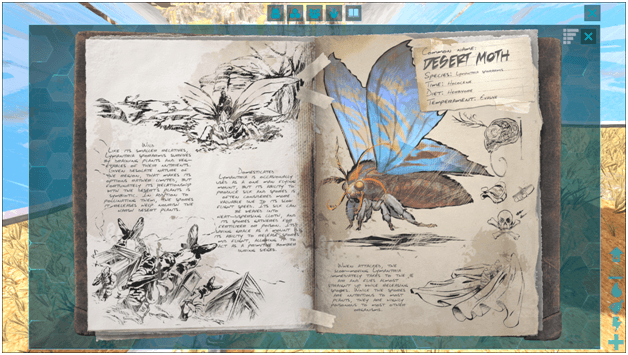 The Lymantria is a simple creature that feeds on plants and shrubs, draining them of nutrients as they fortunately have a symbiotic relationship with the plant life by pollinating them as it feeds.

Lymantria isn’t a dangerous creature by any means and its only way of defending itself is by releasing its spores that can slow down the movement or actions of creatures that inhale it.

Some say that tribes have tamed the Lymantria as silk producers for clothing and its spores can be used as fertilizer but this is yet to be seen.

It has proven itself to be useful in battles and in taming creatures due to its ability to impair the movement of other creatures. 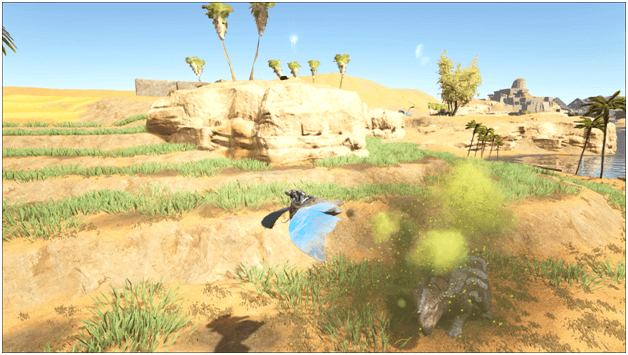 Fairly easy to tame the lymantria can be a good first mount when starting out in the desert as it can get around and slow enemies that attempt to attack it.

Lymantrias are good to have when it comes to raid defence, able to gas bomb charging dinos and slowing them significantly even used in taming slowing down fleeing creatures aside from other Lymantria.

How to Tame Lymantria? 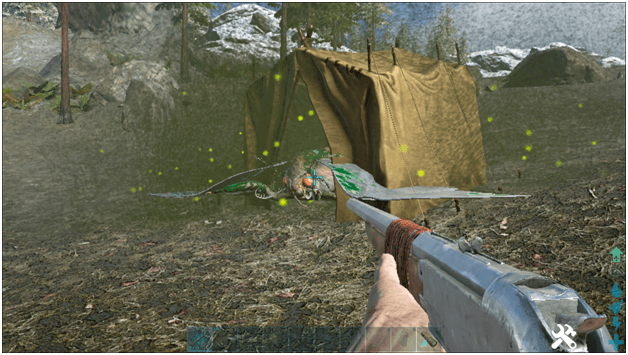 The Lymantria can easily be tamed by throwing a Bola at it in order to immobilize it before knocking it out.

Another trick when taming a Lymantria is to place down a Tent on top of it in order to trap it, later on to be shot at with your torpor inflicting weapons.

The Lymantria is incapable of breeding and in order to have several of these, each must be tamed one by one.

Lymantria can usually be seen feeding from plants on shady hillsides that are near water sources.

Maps where there are Lymantria:

The following are spawn maps where the Lymantria can be found 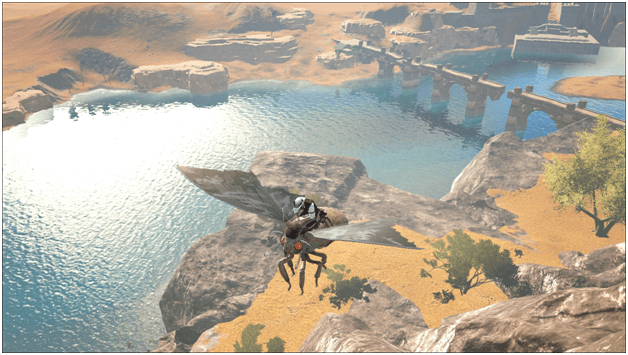 Lymantria are peaceful creatures which are actually uncommon in the harsh desert but they are not totally defenseless as they may use their spores to slow down other enemies and make a run for it.

As an early flying mount, it gives anyone a great chance to find a suitable place to start their home by providing an early way to survey and scout around.

Not only is the Lymantria good for taming wild creatures but it is also useful when fending off enemy attackers and preventing any of their raid creatures from escaping when on low health due to the spores that it can unleash.