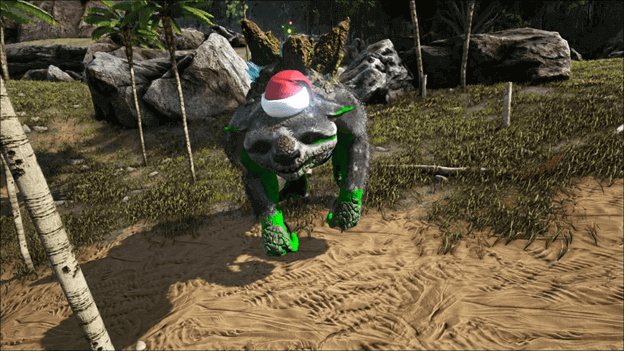 Ark Survival Evolved has its way of celebrating Christmas and introduces a few things every year to celebrate it.

One of these is the spawning of GachaClaus creatures in the different maps of the games, which players can interact with to get rewards.

While the GachaClaus alone does not have much at first, you may later encounter the Raptor Claus during the night, which will allow you to get goodies from the GachaClaus.

The GachaClaus is a variant of the Gacha which appears during the Christmas event and is considered to be the second “Santa Claus” in the game.

Its addition to the game provides you with a chance to get goodies during the duration of the event by feeding it certain items.

By feeding, you simply must give it items that can be obtained from the Raptor Claus and will eventually be able to get items later from Gacha Crystals.

Since GachaClaus taming is not a thing, players can still open its inventory if they find one roaming the area. If you have a Mistletoe or Coal, which is obtained from the drops from a Raptor Claus, you can place these in its inventory.

The GachaClaus will have to have crystals on its back, which can be replenished if it walks near resources and attacks them.

Once the GachaClaus has crystals on its back and you have placed a food item of its choice in its inventory, it will drop a Gacha Crystal.

How to Get GachaClaus Crystals?

A GachaClaus will only drop crystals if you give it the food that it prefers, which is either Mistletoe or Coal, which drops from the Raptor Claus.

Regardless of the amount you give it, the GachaClaus will only drop one Gacha Crystal at a time, so you should give it one of the food items each time.

Keep in mind that the GachaClaus will eat the items in its inventory even if there are no crystals on its back, so it’s best to wait for it to smack resources first.

Gacha Crystals that are dropped by the GachaClaus can be used in your inventory to obtain different items depending on the rarity of the crystal.

Some of these can be armor, weapons, or Festive Dino Candy and even Chibi Pets that you can equip on your character.

It is best to open the Gacha Crystals when you have returned to your base as the weight of the crystals will be light, but they can later give a heavier object.

Admins or players who can use console commands can summon the GachaClaus using the Gacha Claus spawn command: cheat summon Gacha_Claus_Character_BP_C

The GachaClaus cannot be tamed by any regular means but with the use of the forcetame admin command, players can tame it.

Multiple GachaClaus can spawn all over the map and these are almost random, making it difficult to pinpoint the exact location.

They will usually spawn in areas that have herbivores, which ensures they have a chance at survival as they will only run away when attacked.

The best way to find a GachaClaus is to fly around and look for it, which can be easy due to the Santa hat that it is wearing. 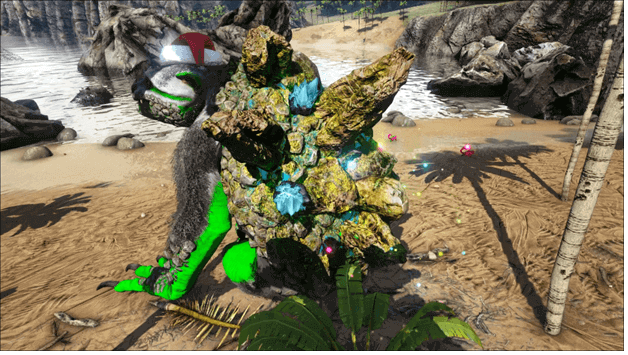 The GachaClaus is a great way to get items randomly and serves a purpose for the Mistletoe and Coal that you get from the Raptor Claus.

You should be sure to look out for wild creatures that may attack as they can end up killing the GachaClaus if they spot it.

Keeping note of where a GachaClaus is located would be vital for returning to it now and then when you have its food items.