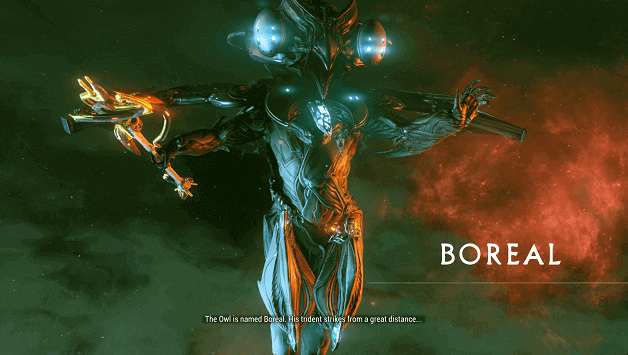 “The Owl is named Boreal. His Trident strikes from a great distance.. deadly chaotic arcs. One might avoid them with a keen eye if you can anticipate their faint threads before. Even the very ground you walk upon will become Boreal’s weapon. He may have a weakness at this moment, but it is not obvious. Worst of all is the paralyzing screech. Terrifying, yet this moment is your only chance to close in, unseen, and strike.” -Hunhow

Archon Boreal has the appearance of an Owl for a head and the body of Loki Prime, wielding the Korumm, his signature weapon.

Boreal deals Electricity damage and is capable of striking from afar, sending out a wave of electricity that remains on the path the wave crossed, damaging you if you stay.

His screech will cause a barrier to expanding outward, pushing you away while healing and protecting him from damage.

To counter Boreal, you must avoid the electrified ground and use Smoke Screen to enter the barrier and damage him, which can cancel the screech effects.

Boreal will continuously pursue you while attempting to attack you with his Electricity primary attack and occasionally sending out a wave of electricity.

Avoid staying on the ground that is electrified as this can easily drain your health and make sure you keep your distance between him to avoid getting hit.

Continue damaging Boreal until he releases a screech, which will create a barrier that pushes you away, and at this moment you will need to use Smoke Screen to pass it.

Once you have used Smoke Screen and passed through the barrier, you will need to deal enough damage to Boreal to cancel his ability, preventing him from healing.

Continue to do this until you fully deplete his health but beware, he will summon Sentients to fight you, which you must destroy before you can damage him again.

How To Defeat Boreal Boss? 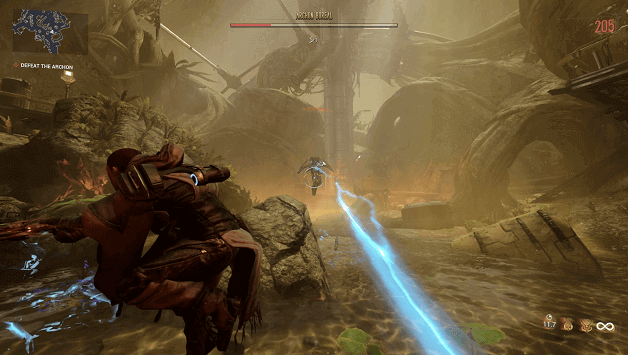 Defeating Boreal can be tricky if you do not use Smoke Screen and enter his barrier, as he will continuously heal himself, prolonging the fight.

While you will eventually defeat him even if he successfully heals himself, this can waste a lot of time and you should make use of the Smoke Screen to cancel his healing.

In the She Gives, We Live mission, you may end up fighting Boreal last if you picked the other Archons first, leading to the fight inside Praghasa.

You will need to cause Boreal to attack 3 Orphix Generators to disable their shields in order for you to destroy them to make him vulnerable.

Once you destroy the Orphix Generators, Boreal will be vulnerable and by this time you should have a Warframe and Paracesis to easily defeat him.

Arcane Boreal can be quite a nuisance even from afar due to his electrical attacks and his ability to teleport, but taking cover can be a big help when fighting him.

Be sure to dodge or jump out of the electrical fields that he creates and to deal damage to him whenever you get the chance, best done behind cover.

It is important to save Smoke Screen for when Boreal does his screech so that you can easily cancel it and continue damaging him.