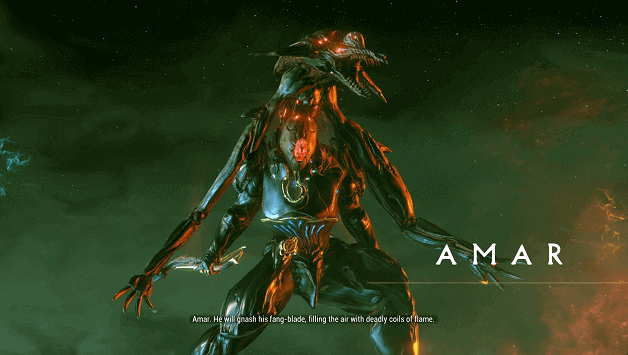 “Amar. He will gnash his Fang-blade, filling the air with deadly coils of flame. Survive the flame, and you might see frenzy. A relentless fury of slashes. Only the greatest of force will subdue him in this. Should he howl, the pack will appear. Mirrors of himself, meant to confuse. Only the true eye can distinguish the alpha among them.” -Hunhow

Archon Amar has the head of a wolf and body of Rhino Prime, making him a bulkier enemy but strangely equipped with his Fang-blade.

This Archon uses Heat projectiles and most attempts to attack you from up close with several strikes or will leap towards you to slam the ground and set you on fire.

Equipped with his signature Nepheri dual daggers, he will attempt to attack you with blazing fast attacks and may unleash projectiles if you are too slow to evade them.

Amar will attempt to approach you and if you do not keep your distance, he will attack you with several strikes with his Fang-blade.

When there is a distance between you and Amar he will either teleport to you and attack you with his Fang-blade or will leap towards you.

Upon landing, Amar will cause you to catch fire which will damage you over time but this can be avoided if you dodge or get out of the way in time.

When he has taken enough damage, Amar will summon clones and stay still for quite some time, which should be enough for you to find the real one by damaging them.

How To Defeat Amar Boss? 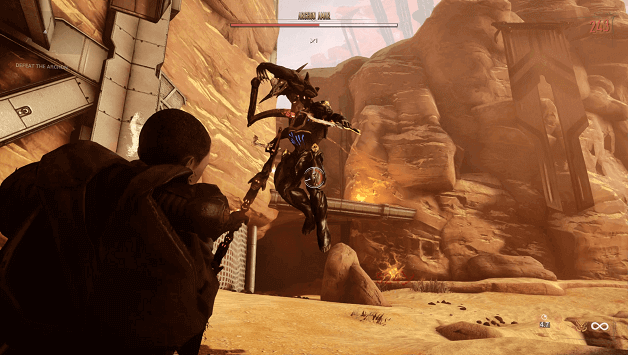 Amar is quite aggressive and can deal a lot of damage if he successfully sets you on fire, which is why you should dodge when you can.

Once he does a leap, you have enough time to do a few shots but remember to keep your distance so he cannot attack you up close.

Should he attempt to do his combo with his Fang-blade, you will be able to get enough shots off of him to deal a good amount of damage.

Continue avoiding his attacks and taking shots at him until you completely deplete all of his health, remain distant from him, and try not to get burned.

Amar may become the third Archon that you face in the She Gives, We Live mission if you have fought the other two archons first.

This will lead you to a fight with him on the Praghasa, where you will need to first destroy 3 Orphix Generators to allow you to damage Amar.

You can disable the shields of these by making Amar attack, and after these have been destroyed, you can finish him off with your Warframe and Paracesis easily.

Amar is more aggressive than Boreal and slower than Nira but what he lacks in such areas he makes up for with damage over time.

Your best advantage over Amar is that he is very slow and has a tendency to be delayed after his attacks, especially after a leap or while he is doing his combo attack.

If you are fighting Amar on Mars, you can make use of the wide area to keep your distance from him as he barely uses any ranged attacks.