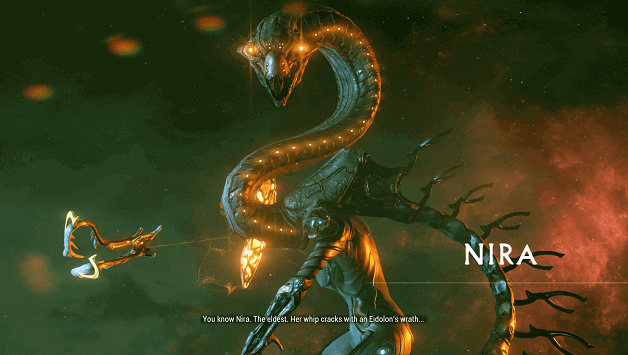 “You know Nira. The eldest. Her whip cracks with an Eidolon’s wrath.. Bone-shattered shockwaves were unleashed by every unfurling of its tip. Her whip is more than pain; it is protection. And more… for if you stand in awe of its spiral, the great thunderclap that follows will knock you senseless. Though… she may be diminished somewhat by this exertion. And her gaze. To meet her gaze is certain death. Only by turning away would you hope to survive.” -Hunhow

Archon Nira appears to have the body of Mag Prime and a snake or serpent for a head, dealing Toxin damage in her wake, who is equipped with a Verdilac.

Her whip can strike you from a long-range and can take her across distances to leap towards you for a poisonous bite.

She can create a shield with her whip which heals her and worst of all can use a screech that you need to avoid as it can lead to your doom.

When she is distant from you, she may attack you with Toxin projectiles but eventually, she tries to get close to you to attack you up close.

Nira will most likely start bike cracking her whip at you or sending out a projectile that can poison you, dealing damage over time.

You will need to keep a good distance between the two of you and make use of cover or else she might be able to hit you with her whip.

Whenever she attempts to use her screech, make sure you turn away and seek cover or it could be the end of you.

While Nira is faster than the other Archons, her moves are somewhat predictable and you can easily time your attacks.

How To Defeat Nira Boss? 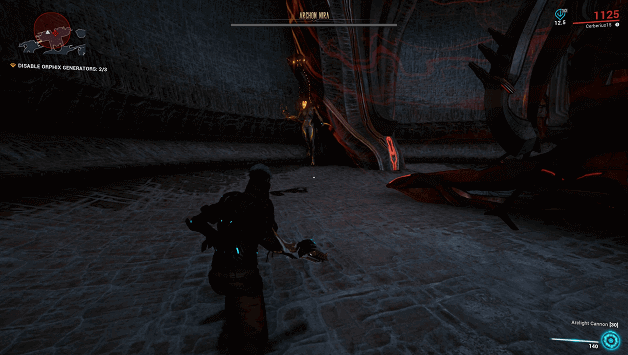 You can fight Nira in two ways, either keep your distance and continue firing at her or stay up close and make sure to dodge on time.

From afar you can safely damage her but should beware of her leap and whip attacks that can get you even if you are far from her.

If fighting close to Nira, you can deal a lot of damage in a small amount of time but this may be more dangerous yet easy if you can dodge well.

You will need to keep firing at her until you can deplete her health, taking time to recharge your abilities or press on with an attack if she creates a shield.

Should you choose to fight Nira last, you will begin in the She Gives, We Live mission and will fight her later on after teaming up with Erra.

This will require that you use Nira’s own attacks first to destroy the shields of 3 Orphix Generators before you destroy them.

Destroying all 3 Orphix Generators will allow you to damage Nira, which should be easy since you will already have your Warframe back and a Paracesis.

Nira is the first Archon that you encounter in The New War but it is not during any of the later missions but rather during your first time as The Drifter.

This usually makes players choose her as the last enemy which also follows the order they were introduced to when speaking with Harrow.

While Nira appears to be one of the more aggressive Archons, she is quite easy to defeat if you can properly evade her attacks, easily done by taking cover and moving.