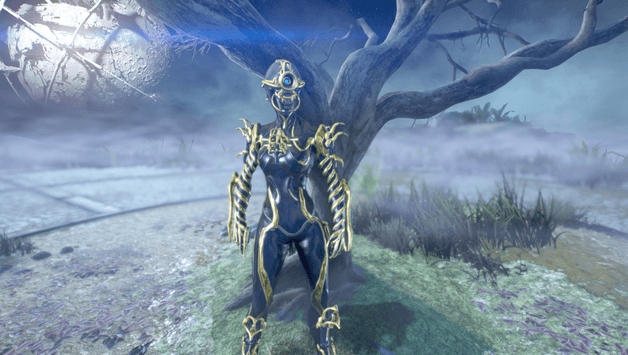 Mag is a Warframe who uses magnetic powers to manipulate and harm her enemies and use her magnetism to bend situations to her favor.

She is great for manipulating not only enemies but projectiles to use against her enemies and also provide decent crowd control and help her team deal damage.

How to Get Mag? 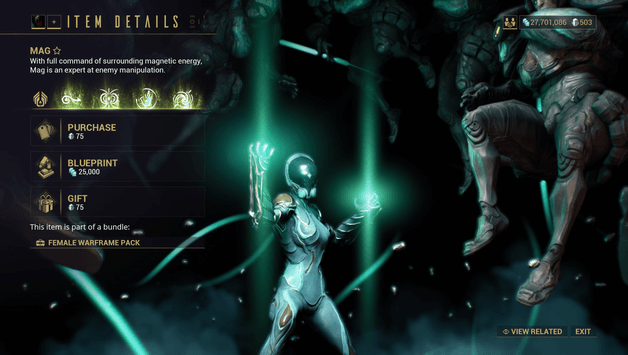 Mag’s parts may be obtained by defeating The Sergeant on the Iliad mission on Phobos.

Her blueprint may be bought from the Ingame market on the orbiter for 25,000 Credits.

Aside from farming for her parts, Mag may be bought from the Ingame market for 75 Platinum. 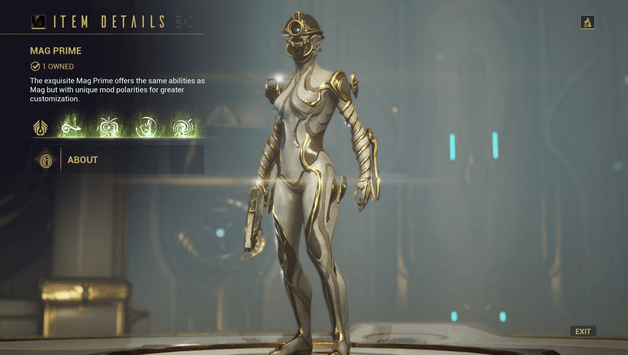 Mag Prime is the prime variant of Mag which sports a higher amount of health and energy. 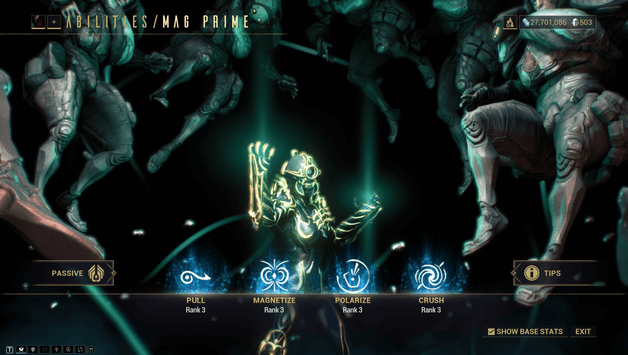 Mag has the power to use her magnetic forces to pull drag enemies towards her direction, focus projectiles on enemies, user her power to weaken the armor of enemies and manipulate her foes and crushing them at will.

Her passive ability allows her to pull pickups whenever she does a bullet jump. 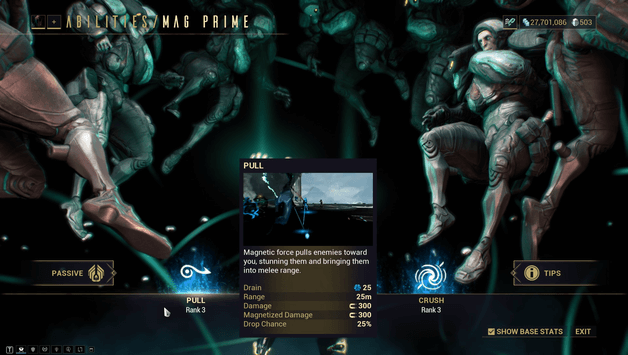 Mag pulls enemies towards her dealing magnetic damage and causing them to be downed allowing you time as they get back up.

This is useful as it does not only deal damage but can do good magnetic damage to medium level enemies as well as pull them in closer for a kill.

Pull may be used to drag enemies into hazardous locations or even through them off of the map, killing them instantly.

Enemies that die from Pull have a chance to drop an energy orb. 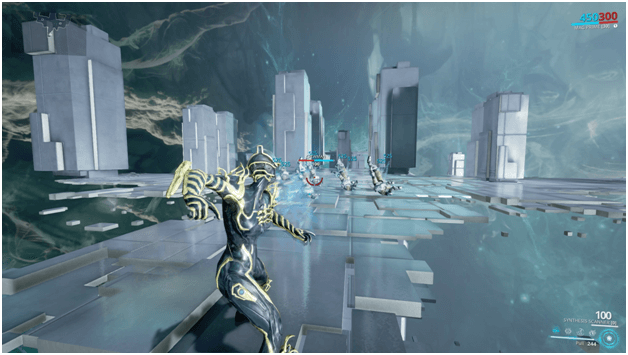 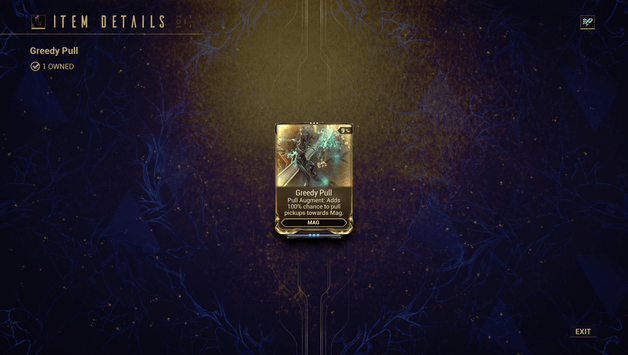 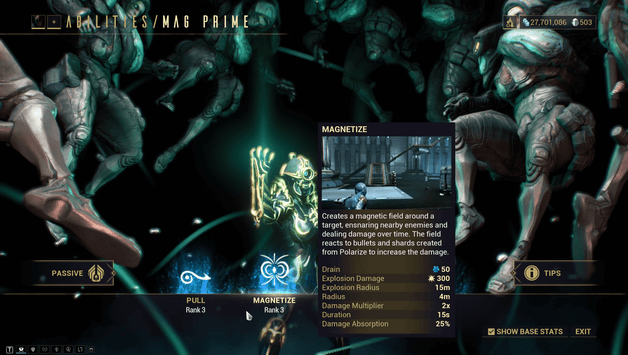 Mag creates a field by targeting an enemy, the fill will pull or prevent some enemies from moving and certain projectiles will be attracted to enemies within the field.

After an amount of time, the field will explode and deal even more damage afterwards with the addition of more damage.

This is a very powerful ability as you may use this to trap enemies and fire onto the field which will then damage all of the enemies within the field with the addition of a damage multiplier.

This ability can be used with Polarity to weaken the enemies and deal even more damage. 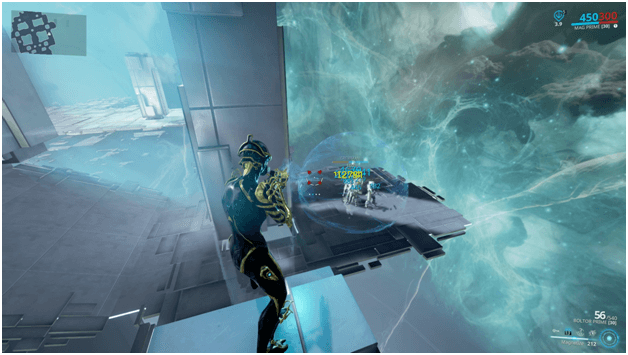 (Mag firing at a field that enemies are trapped in) 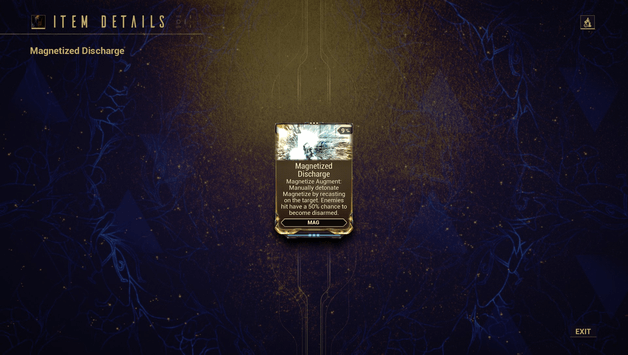 Augment Mod: Allows Mag to manually detonate the field which may also cause enemies to be disarmed. 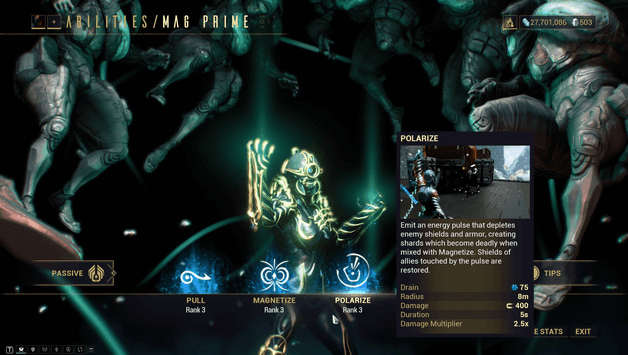 Mag creates a large field that damages the shields and armor of enemies and turns them into shards which can damage them.

When used with Magnetize, these shards add up with the damage that can be done and any allies that are in the area of the ability will have shields restored.

This ability is great for weakening enemies and adding damage with magnetize but also does a pretty good job at supporting due to the fact it can replenish ally shields. 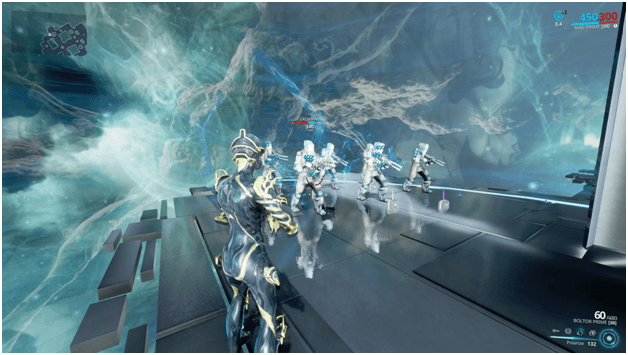 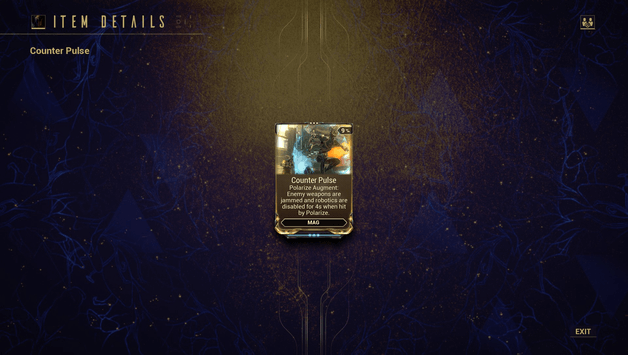 Augment Mod: Counter Pulse causes enemies in the pulse to be unable to fire weapons and robotic enemies to be stunned. 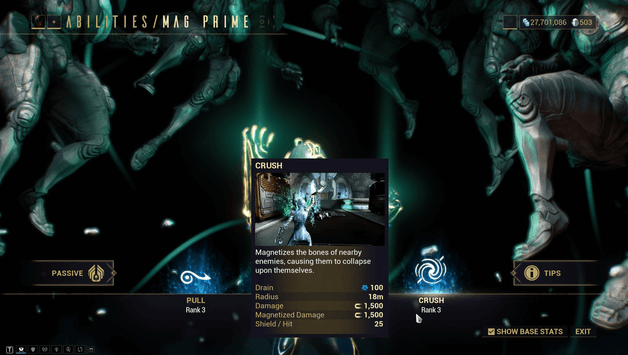 Mag lifts enemies and surges them with magnetic energy causing them to be crushed with magnetic damage and be dropped afterwards.

This is great for crowd control and dealing damage to enemies and can be used to change a situation that is a bit overwhelming into a more opportune one.

Allies will have their shields replenished based on how many enemies have been affected by the ability.

This ability is cast over a short amount of time and will continuously damage enemies caught in the area or that walk into the area while Mag is still casting. 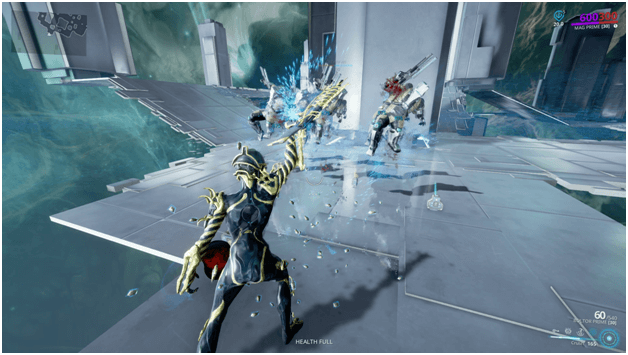 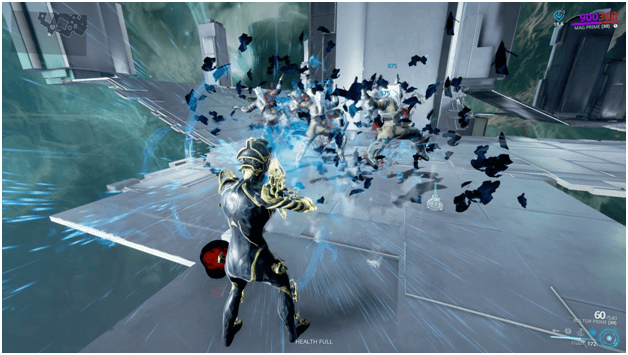 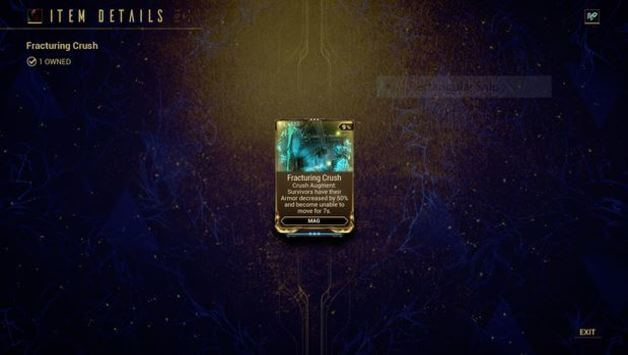 Augment Mod: Fracturing Crush causes enemies to have reduces armor for an amount of time after Crush. 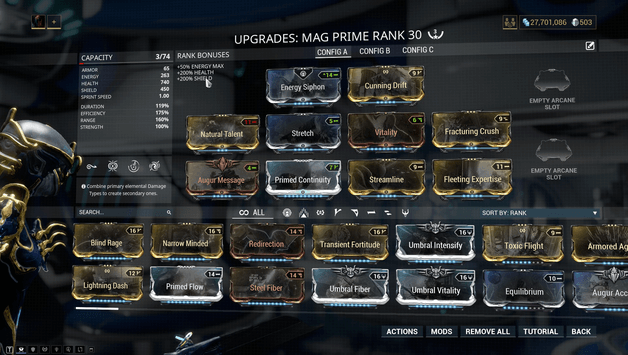 This build is meant to use the Fracturing Crush augment and to be able to cast Mag’s Crush ability multiple times.

Being able to make use of the Fracturing Crush augment will allow you to weaken enemies after using the Crush ability, making them easier to kill due to the reduced armor.

This is build is great for dealing crowd control, making it easy to attack enemies since you can repeated use Crush and other abilities at a low cost of energy.

Pull will cost less and the range is also increase allowing you to send enemies flying around which also gives you an advantage to attack as they get up.

The range of Magnetize and Polarize will be increased and their cost in energy is also reduced.

Crush will be the main ability that is used due to the augment making enemies more vulnerable and giving you and your squad an upper hand during fights. 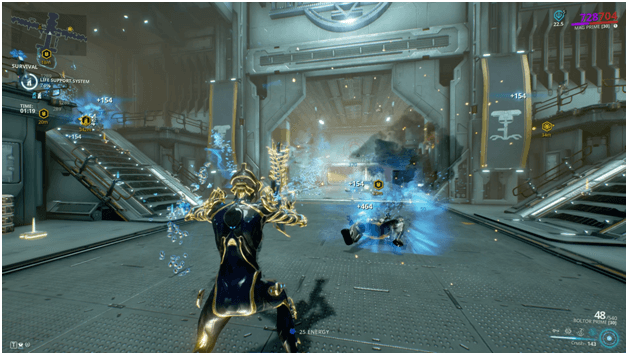 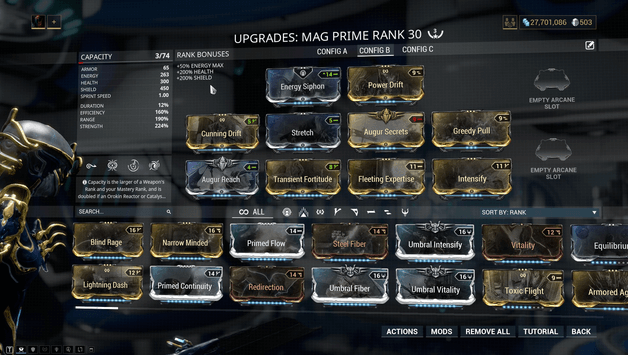 This build is mainly for the use of the Pull ability and with the addition of the Greedy Pull augment, both enemies and items can be easily pulled.

With the low amount of energy cost, Pull may be spammed, repeatedly pulling enemies and dealing damage, throwing them around as well as collecting pickups.

This is great for clearing and farming lower level missions as well as quickly earning credits on lower level dark sector missions.

There is a large reduction in ability duration but the range and strength of the abilities will be increased to a goo extent. 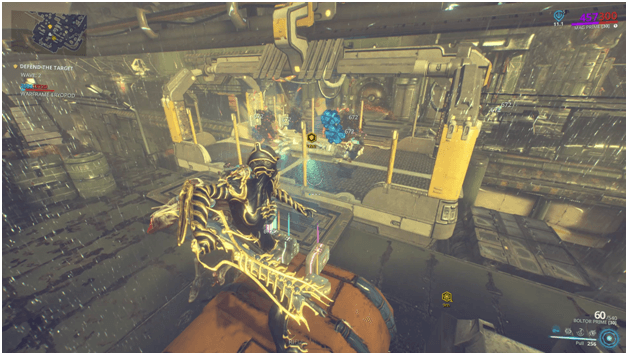 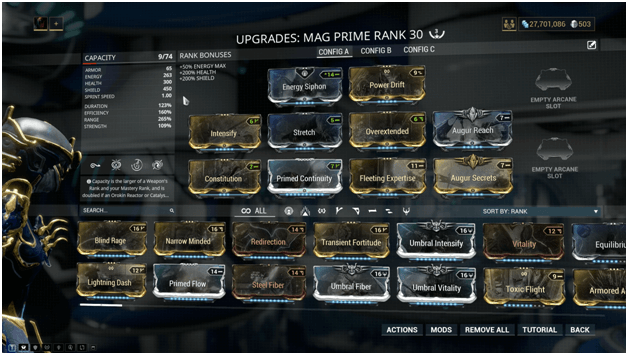 The range build is mainly focused on giving a high area of effect for Mags abilities at the same time as reducing the costs of the abilities.

Pull will now pull enemies from very far away making it easy to get them all together or even kill them before they reach you.

Magnetize will have a larger radius and it will be easy to distribute damage among them by firing into the large magnetic field that is created.

Polarize will be able to affect several enemies making it easier to weaken them as well as cover any fields created with Magnetize.

Crush will deal a significant amount of damage regardless of the almost unchanged amount of strength but will cover a very large radius making this good for crowd control or killing weaker enemies. 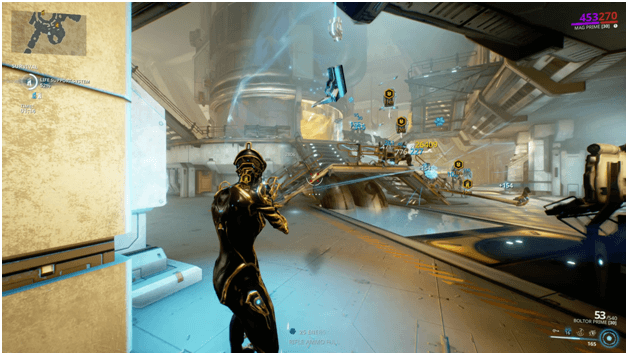 (Mag firing into a field created by Magnetize) 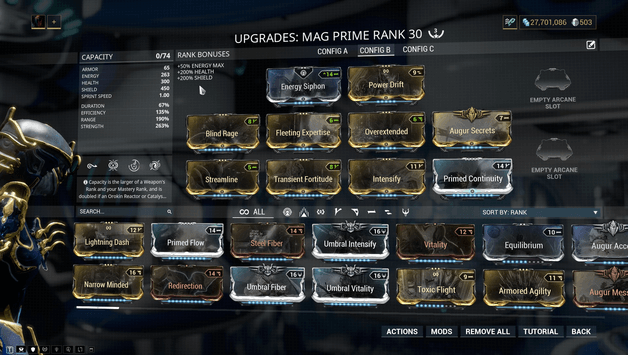 This build consists of a good amount of efficiency with decent range and a great amount of ability strength.

It may have a reduced amount of duration but this still allows majority of Mag’s abilities to be used well.

All abilities deal more damage, cover a larger area and will cost less energy at the downside of a lower duration. 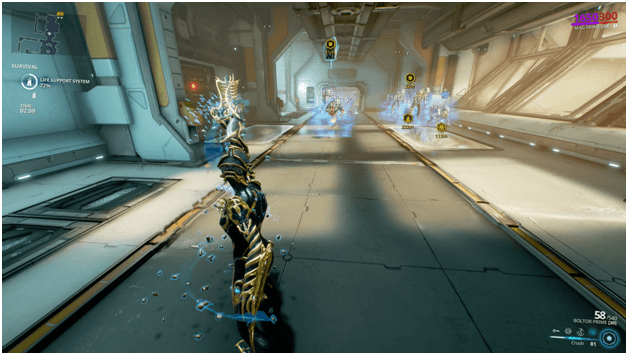 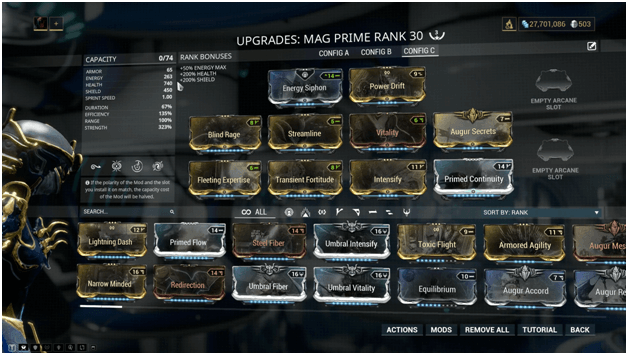 With a reduction to duration and an unchanged range for the abilities, this build has reduced energy cost and will have a very high amount of ability strength.

This will allow Mag to deal high damage with her abilities at close to normal range and will be good for those that like to get close and personal with enemies or that can slip in between battle using abilities with skill.

The damage of all abilities is greatly increased as well as they will be costing less energy, allowing you to cast them more than usual. 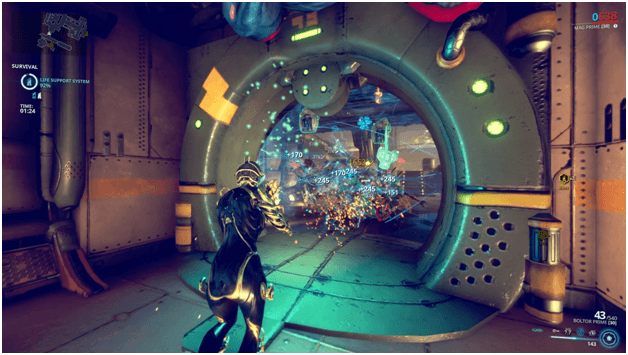 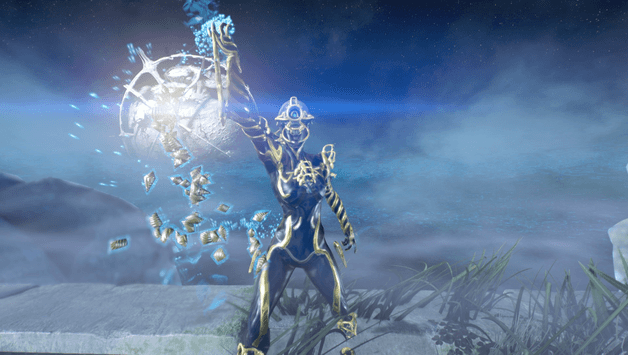 Mag is a very fun Warframe to use because there are different ways to use her and it depends mostly on how creative you can get.

Her abilities are great for crowd control and weakening enemies while also allowing her and her team exploit them as she can manipulate enemies allowing the team to deal damage and make use of the crowd control.

Most of her abilities do magnetic damage which makes her very powerful against corpus but this doesn’t mean she can’t do a lot of damage to other enemies.

With her magnetize ability alone, she can do very large amounts of damage and even her allies may add up to this damage.

If you’re looking for a unique and fun to use Warframe, then Mag is definitely one you want to try as you will be having different experience other than the other Warframes out there.