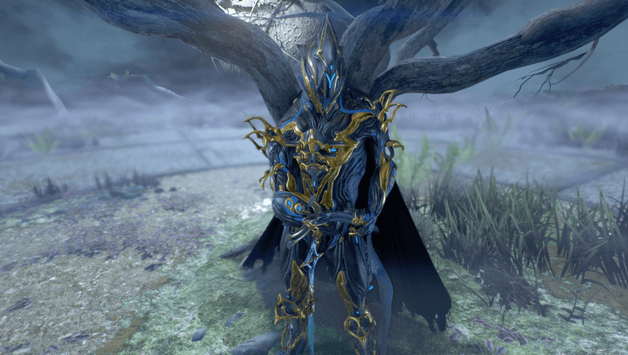 Excalibur is one of the most iconic Warframes in the game, a perfect balance between speed and strength and a great Warframe for new and experienced players.

He is widely known and one of the most iconic Warframes, being shown most of the time and an available beginner Warframe that offers a lot of different plays and has powerful abilities relating to the usage of his energy and sword prowess.

How to Get Excalibur? 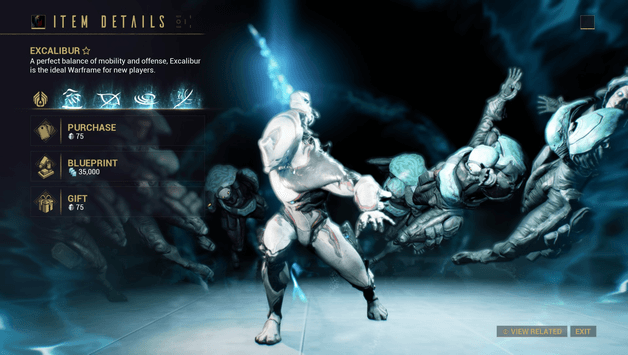 Excalibur parts may be obtained by defeating Lieutenant Lech Kril on the War mission on Mars.

Aside from farming for his parts, Excalibur may be bought in the Ingame market for 75 Platinum. 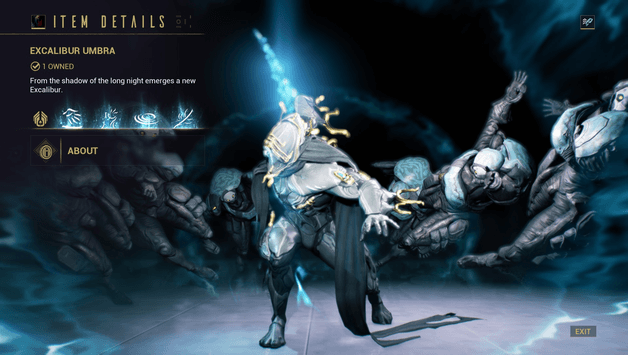 Excalibur Umbra is the Umbra and unique variant of Excalibur, featuring higher armor and energy along with the Warframe being able to move and fight on its own when the owner is in operator mode. 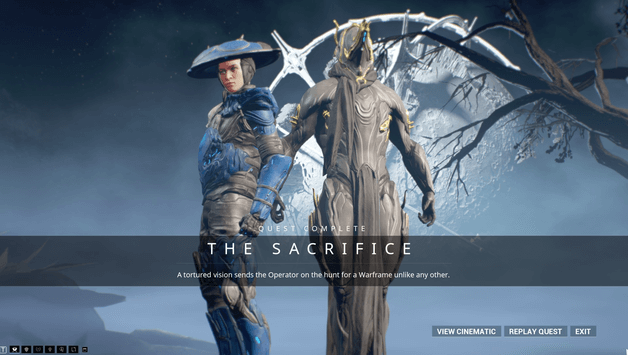 A blueprint to craft the fully built Excalibur Umbra is awarded after completing “The Sacrifice” which is the quest related to the lore of Excalibur Umbra. 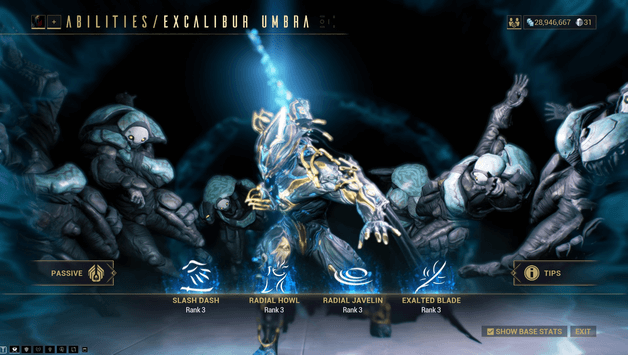 Excalibur has the ability to slash multiple enemies with a single dash, blind enemies with an intense flash from his weapon, summon javelins to kill his enemies and unleash the power of his true exalted blade.

His passive allows him to deal increased damage and attack faster with swords, dual swords, nikanas, two-handed nikanas, and rapiers.

Excalibur Umbra has the unique ability to move and fight on its own when you are in operator mode where he will use any equipped weapons and resort to melee if close to enemies. 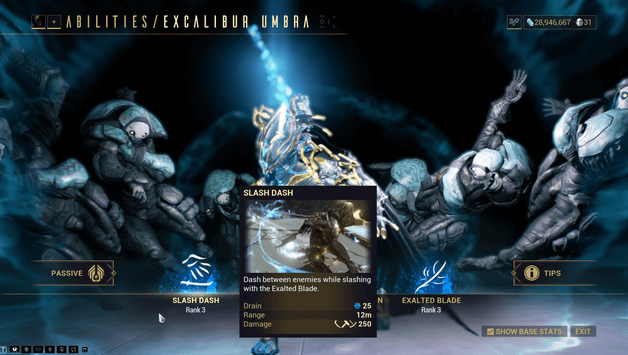 Excalibur dashes forward and attacks enemies that he comes in contact with, slashes one at a time on his way.

During Slash Dash, Excalibur is immune to damage which makes this good for both attacking and escaping enemies.

Casting Slash Dash with Exalted Blade active gives bonus base damage and sends out waves towards an enemy as well as enemies behind it.

This ability is great for dealing damage and for closing in on enemies or escaping from trouble and may even be cast in the air for quick movement. 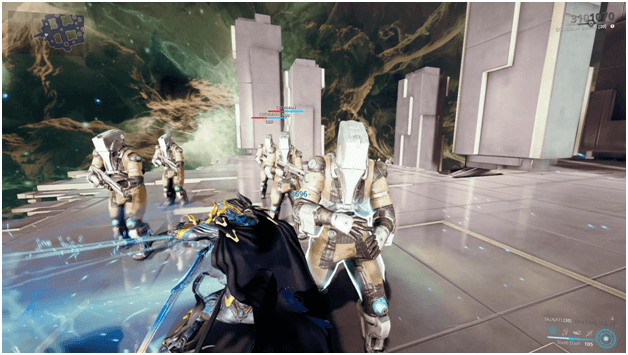 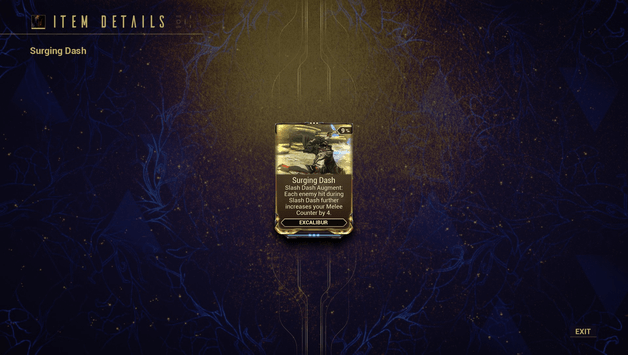 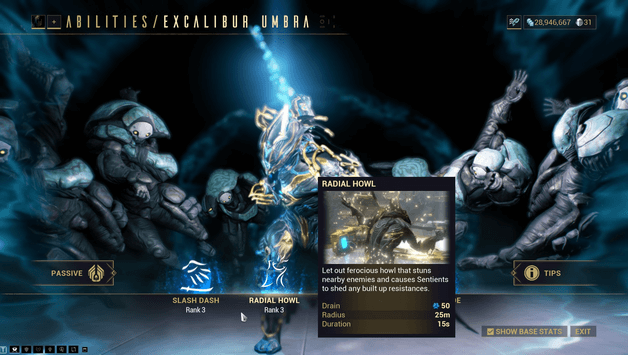 When cast, enemies are stunned and become open to finishers and when cast by Excalibur Umbra, sentients lose their resistances.

This ability is great for dealing crowd control and initiating finishers that can even be stealth attacks and works great with several situations which may include beginning an attack or escaping from danger. 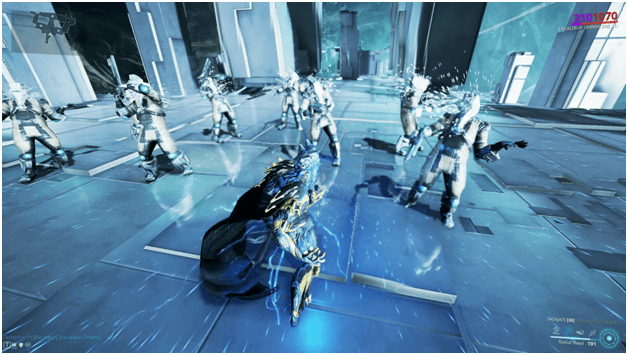 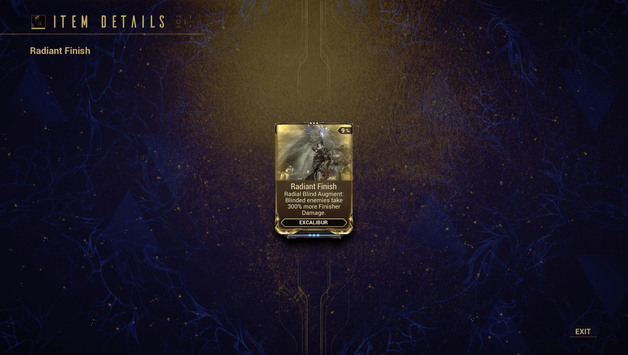 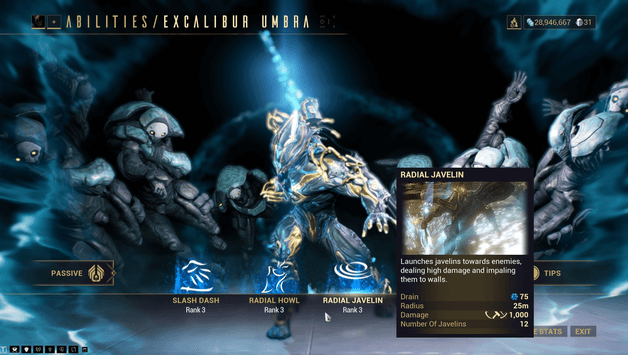 Excalibur slams his weapon into the ground, sending out javelins to impale his enemies dealing damage to enemies in a large area.

This ability stuns enemies who do not die from the initial damage and can be used as a good way to either kill or deal crowd control when multiple enemies are present.

The ability to kill or stun enemies gives a great opportunity for Excalibur to make use of the time after enemies have been hit as well as his allies.

On lower level missions this can be an easy way to get rid of multiple enemies surrounding an objective or to clear them out quickly. 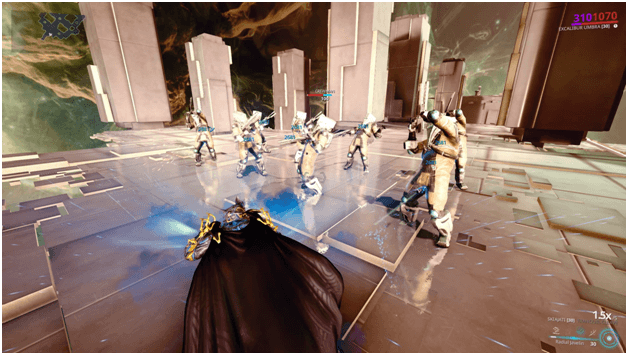 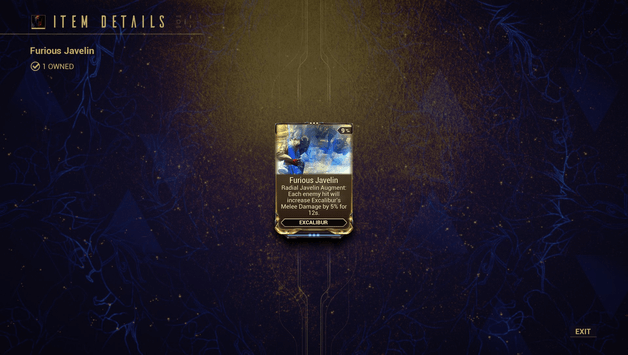 Augment Mod: Furious Javelin increases Excalibur’s damage by each enemy hit for an amount of time. 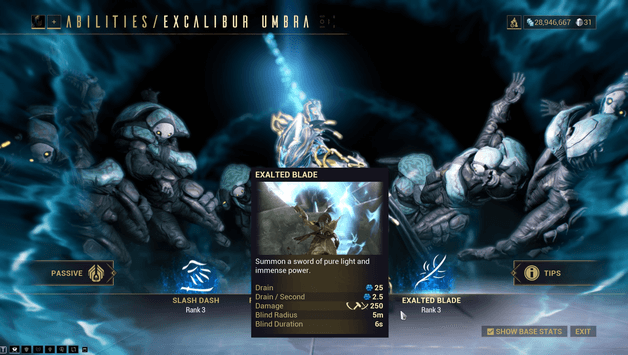 Excalibur unleashes his exalted weapon, summoning a sword that he uses to slash at enemies which also sends out deadly waves when he attacks.

Exalted Blade causes Excalibur to unleash waves that go through enemies and objects when attack and a quick Radial Blind/Radial Howl attack when doing a spin attack.

Excalibur will deal both damage on melee and for the waves sent out through his attacks.

This is a very powerful ability and one can mod it to the way they wish to use it, where it can either be used to deal deadly amounts of damage or to last the entirety of the mission. 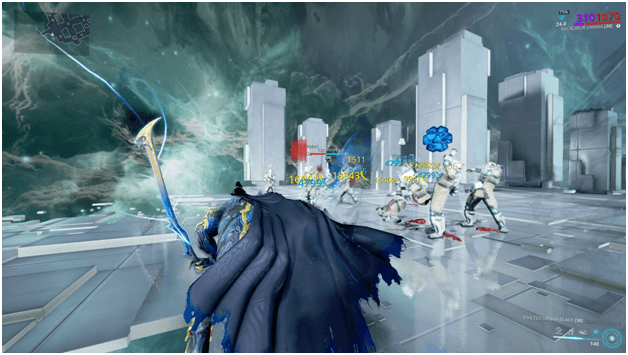 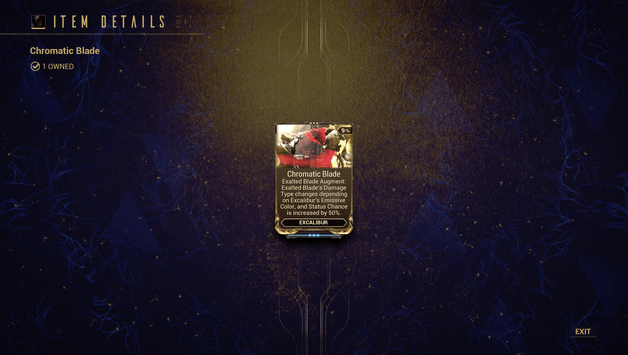 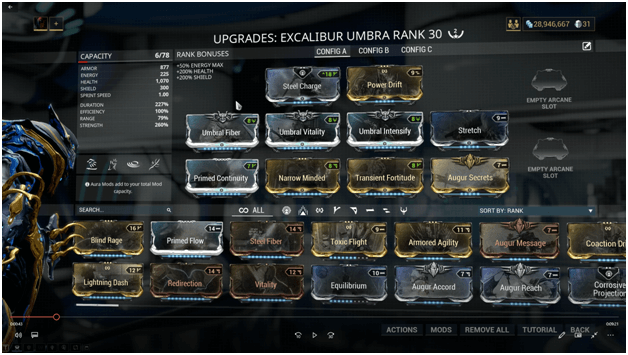 This build allows Excalibur’s abilities to deal more damage and last longer with the reduction in range and no change in efficiency.

Most of his abilities will have shorter range but he may use them to extent where they last longer and deal more damage.

Slash Dash will have a smaller range but will deal more damage and his Radial Howl/Radial Blind will have a longer duration with less radius.

Radial Javelin will have a smaller area but will deal higher amounts of damage which makes it good for melee contact as well as its increased duration makes its stun last longer.

Exalted Blade will have a shorter range when attacking but damage will scale along with the high amount of duration causing it to consume less energy. 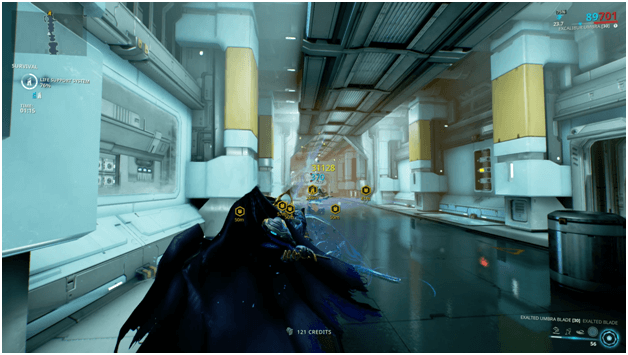 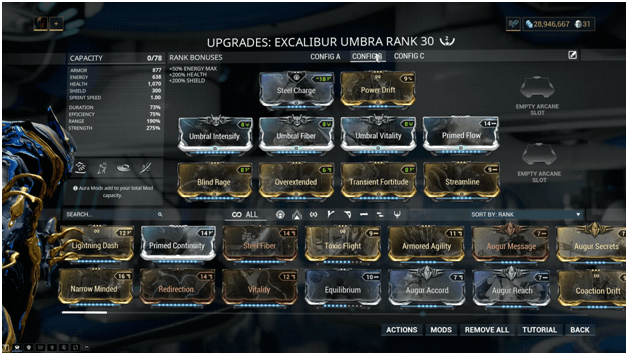 With a higher focus on strength and range, this build trades up the two stats for a lesser duration and efficiency.

This build causes the abilities cast by Excalibur to have a higher range and deal significantly more damage but the costs in energy is increased.

Using this build to deal area damage and crowd control works well and even his other abilities will perform okay.

Slash Dash will go further and deal more damage making it good for traveling distances and clearing out lines of enemies.

The Radial Howl and Radial Javelin abilities will cost more but will have larger area covered with the bonus of additional strength benefiting them both. 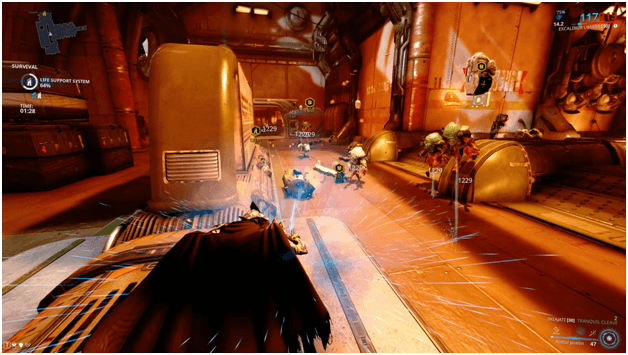 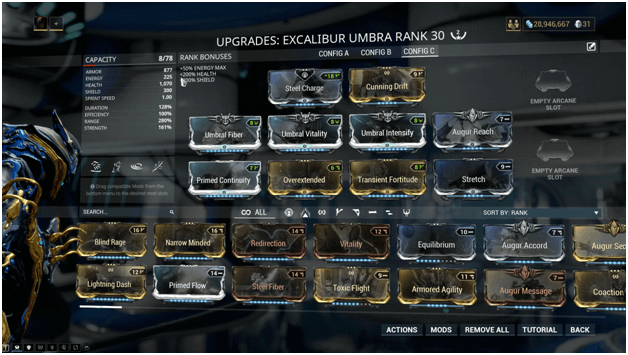 This build benefits from the increased amount of range the abilities will have, making this a good build for crowd control.

Since a larger area is covered, both Radial Howl and Radial Javelin will have a large radius, making it easier to affect enemies.

Slash Dash will allow you to travel even further as well while your Exalted Blade attacks will go further and the effects of the spin attack Radial Blind will also be improved.

This build is great for being a team player, semi support or using the crowd control to simply take advantage of your enemies. 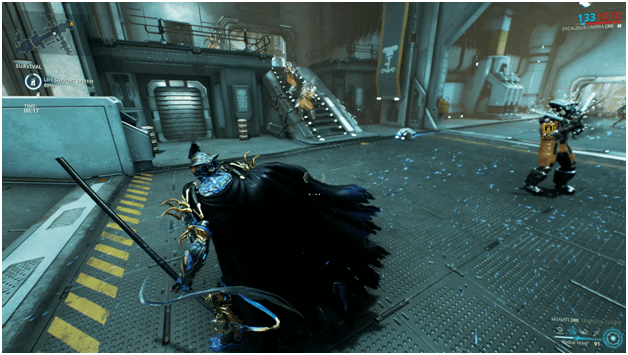 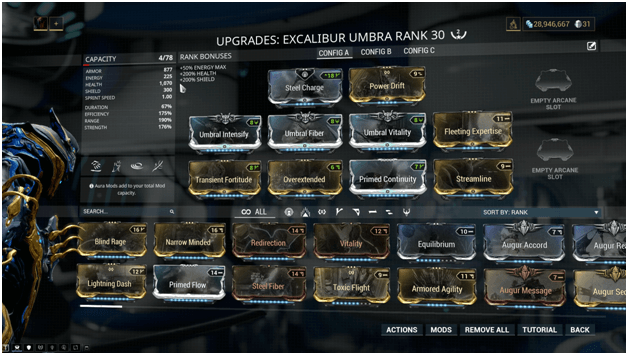 This build trades up duration and strength for a higher efficiency and grants a decent amount of range as well.

This is good for repetitively using his abilities where Slash Dash may be reused over and over to cut down enemies or cross distances.

Radial Howl will be able to be cast using a smaller amount of energy but with less, yet still decent duration for the ability.

Radial Javelin may be used several times and may prove easy for those who like to engage in melee and make use of such abilities. 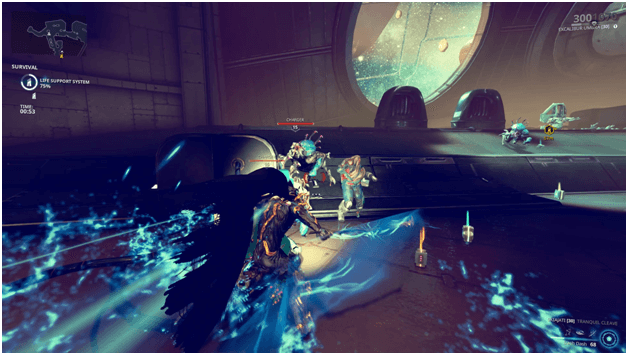 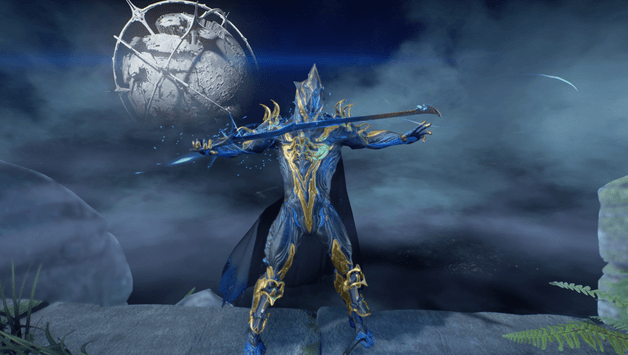 Excalibur is one of the earliest Warframes and is a pretty popular one not only based on usage but since he is considered an iconic Warframe.

He is quite easy to master and may be built easily in many different ways depending on the way the user wishes to use him.

Excalibur is capable of create multiple instances where advantage may be taken by disabling enemies or killing others.

With his Exalted Blade ability, Excalibur is capable of dealing extremely high amounts of damage from even safe distances.

For those who wish to deal quick and successive damage along with elegant movement and attacks that are meant for a 1 vs many fight, Excalibur is a great Warrior to choose.