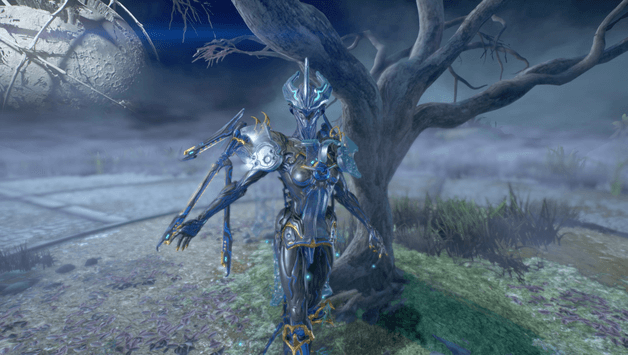 Gara is a crystalline and glass type of Warframe who harnesses her powers to deal damage and protect herself and her allies.

She is a slightly tricky Warframe to use which is capable of multiple roles and popular for her abilities that grant defense and protection which also can be used to kill her enemies.

How to Get Gara? 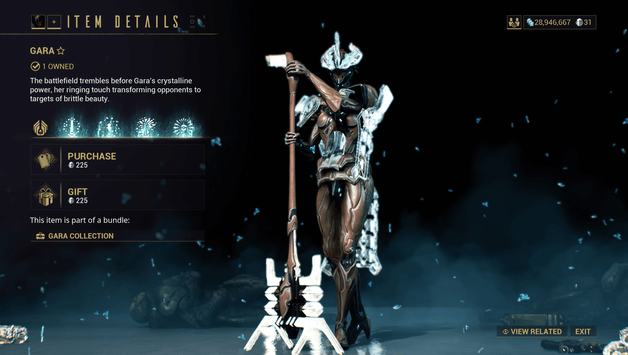 Her parts may be acquired as rewards from different bounties which can be initiated in either Cetus or the Plains of Eidolons via radio tents. 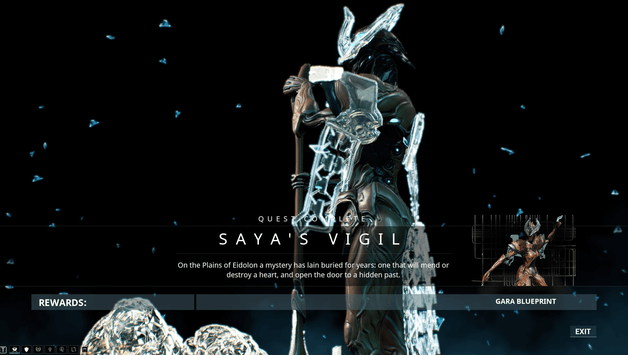 You can acquire Gara’s blueprint once you have completed the Say’s Vigil quest which can be started in Cetus.

Aside from farming for her parts, Gara may be bought in the Ingame market for 225 Platinum. 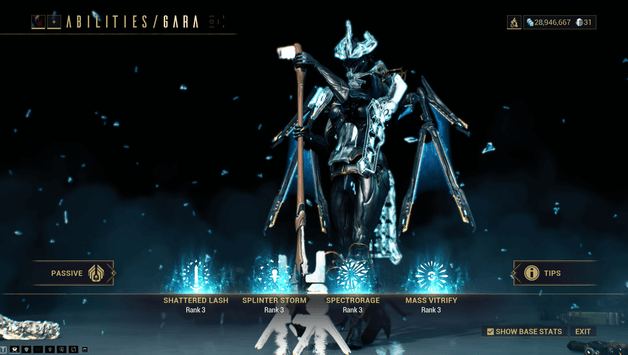 Gara has the ability to send out a projectile or lash out a horizontal attack with her crystalline powers, create a barrier of shards to protect her and damage enemies, trap enemies into fighting with themselves and creating a huge barrier to defend herself and her team or destroy her enemies.

Her passive ability causes nearby enemies to be blinded when she is a light area allowing them to easily be killed or open them up for finishers. 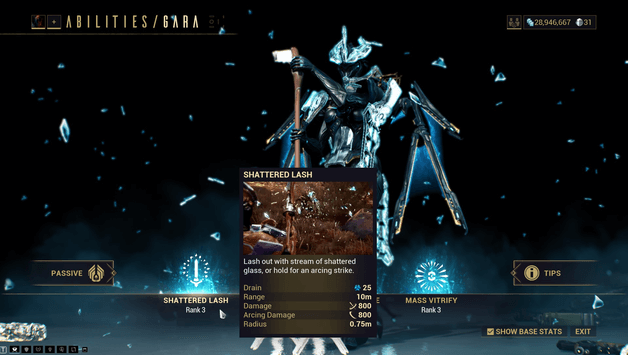 Gara either sends out a projectile of glass in front of her to damage enemies in a line when the ability is cast.

When held she will instead of unleash a projectile, lash out a horizontal slash with a crystalline sword.

This ability is great for killing enemies that are either in a line or that are in a wide area as Gara may easily hit them for a large amount of damage.

When used on Mass Vitrify, the barrier will break and the shards will damage all enemies outside of the barrier. 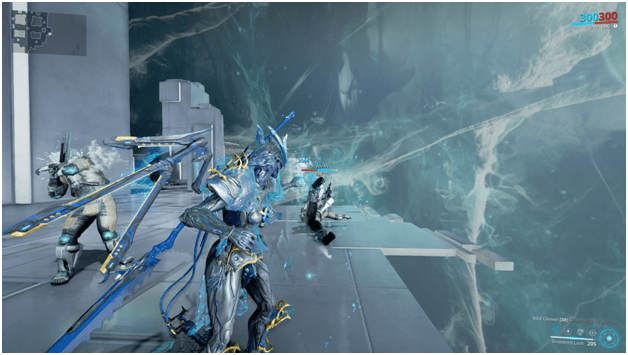 (Gara casting Shattered Lash via ability being pressed but not held) 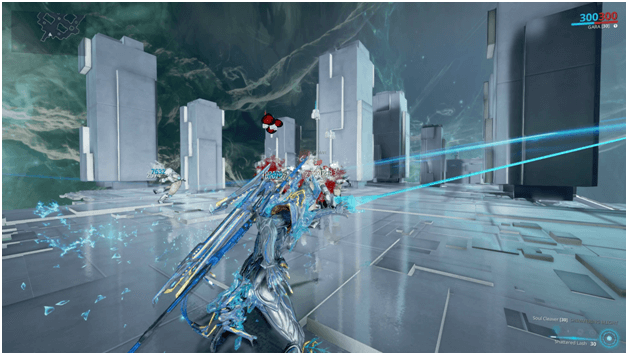 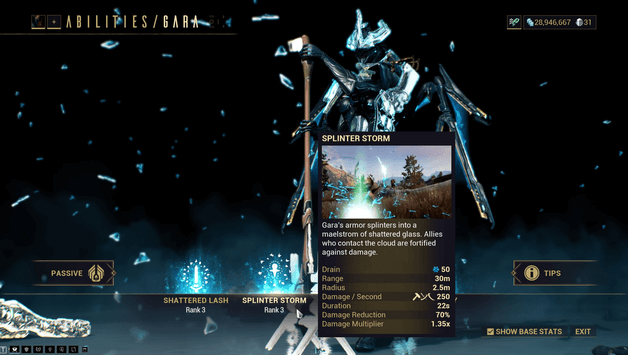 Gara causes shards to fly around her which damage and help push enemies away while also protecting her and her allies against damage.

This ability is great for reducing incoming damage as well as dealing additional damage to enemies and will provide good defense and offense against enemies at close range.

When Spectrorage is cast, any mirror that is destroyed within the radius of Splinter Storm will gain 50% of the mirror damage permanently until the skill ends.

The duration of Splinter Storm will be refreshed when Mass Vitrify is cast which includes allies that are also affected by the ability. 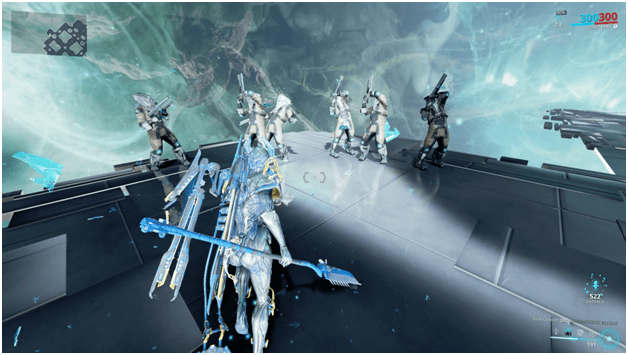 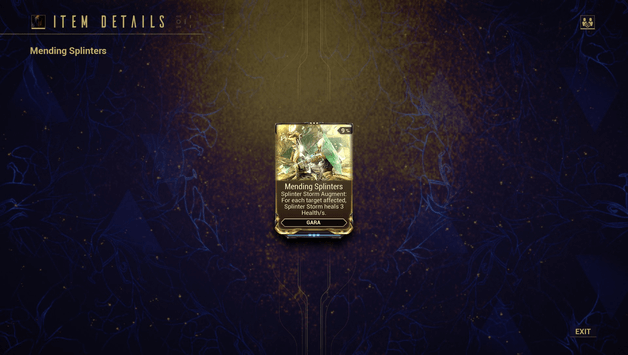 Augment Mod: Mending Splinters causes Splinter Storm to regenerate the health of allies that are effective every second. 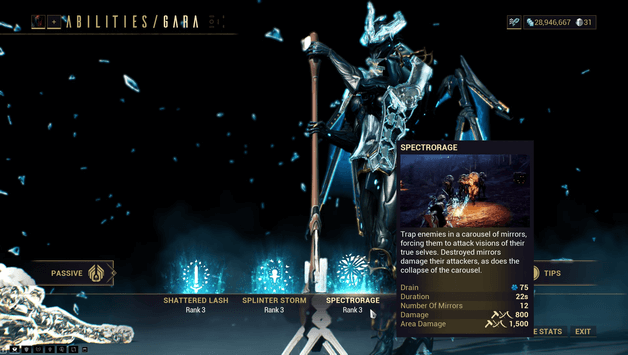 Gara projects crystal mirrors that circle around enemies in an area, causing them to fire at the mirrors and take damage in return.

Mirrors will deal damage to enemies as well as when the ability is over and the mirrors shatter afterwards.

This ability works well as crowd control and damaging enemies, taking there fire off of you and your allies and forcing the enemies to damage themselves.

If a mirror from Spectrorage shatters within the radius of Splinter Storm, 50% of the damage of the mirror will be added to Splinter Storm until the ability ends. 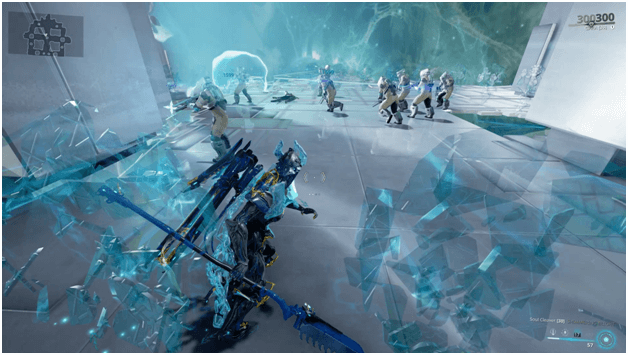 (Gara near enemies while Spectrorage is active) 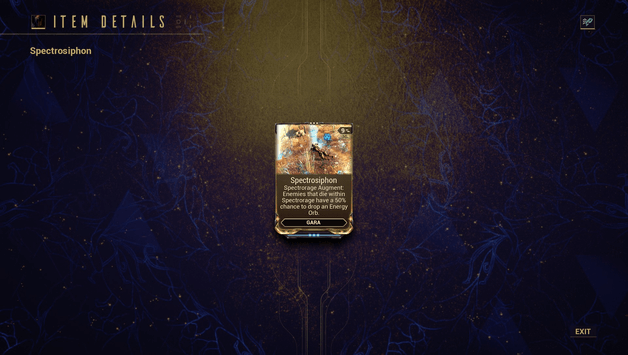 Augment Mod: Spectrosiphon causes enemies that die within the ability to have a chance to drop energy orbs. 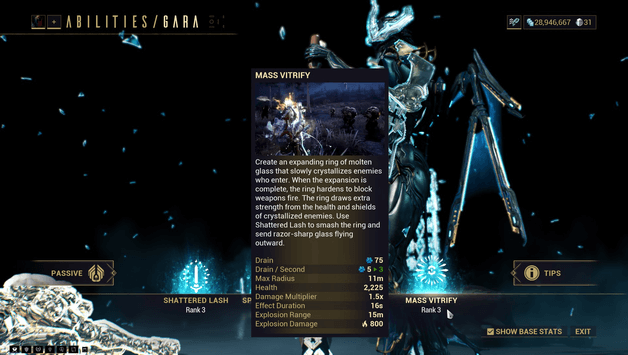 Gara creates a barrier that expands outwards, turning enemies into crystalline form and stopping them in their tracks.

After the ring expands, enemies outside will be unable to pass through and the barrier will have parts that will be durable for a time until destroyed by enemies.

Using Shattered Lash on the barrier will cause it to shatter and damage all enemies that are outside of the ring.

The strength of the barrier and its damage increase based on the health and shields of enemies.

This ability is great for both dealing crowd control and damaging enemies as it can reach high amounts of damage and protect areas or allies.

When Splinter Storm is active and Splintered Lash is used to destroy Mass Vitrify, 50% damage will be added to Splinter Storm until the ability is over. 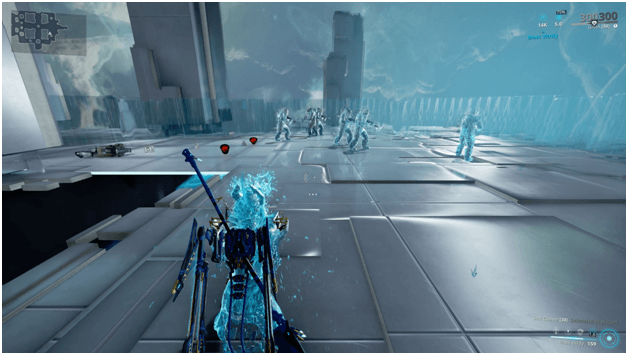 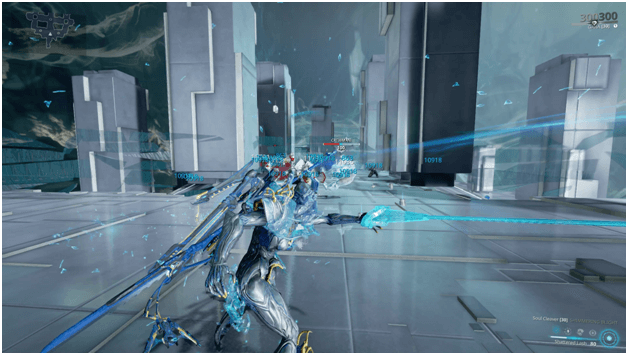 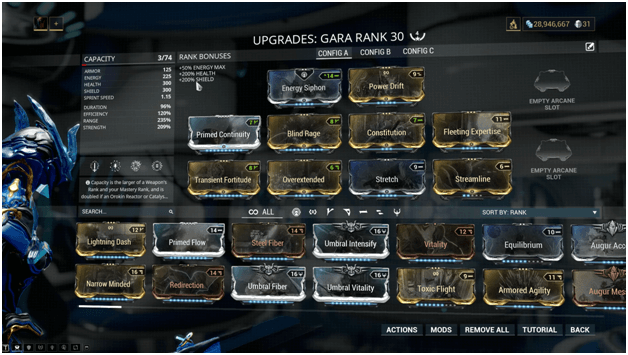 The Balanced Build is meant to increase most of the stats of Gara’s abilities so they may function efficiently when used.

For this build, the range, strength and efficiency have been increased with a slight reduction to duration.

This is for using Gara’s abilities to an extend where they have a good amount of range and deal a decent amount of damage with the addition of having a reduction in energy cost.

Shattered Lash will reach further and have wider range while dealing more damage allowing it to hit enemies further away and easily destroy the Mass Vitrify barrier.

Splinter Storm will cover a larger radius and deal more damage while giving more protection but will last slightly less long but this acceptable as it can be reset or recast when preferred by the player.

Mass Vitrify will spread out wider but for only certain duration, allowing it to cover a decent range while being able to be shattered later on to affect a wide radius and deal a lot of damage. 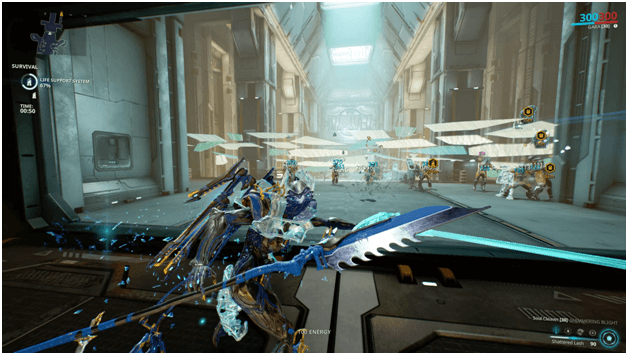 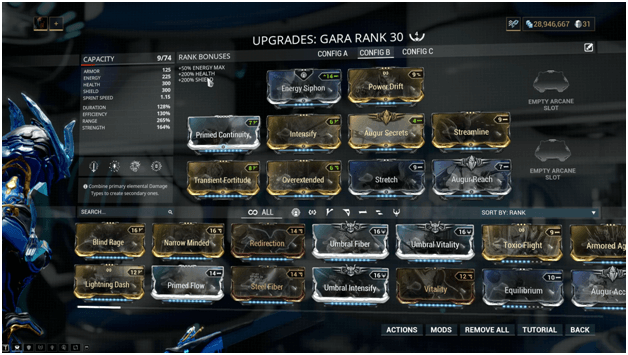 The Range Build takes the previous build and emphasizes more on range with a slight increase in duration.

This may reduce the overall damage of abilities but with the addition of range, Mass Vitrify may cover a larger area and this can allow users to build up more damage depending on enemies affected.

This build works well for covering large areas and taking care of enemies that may get too close or that are in open areas. 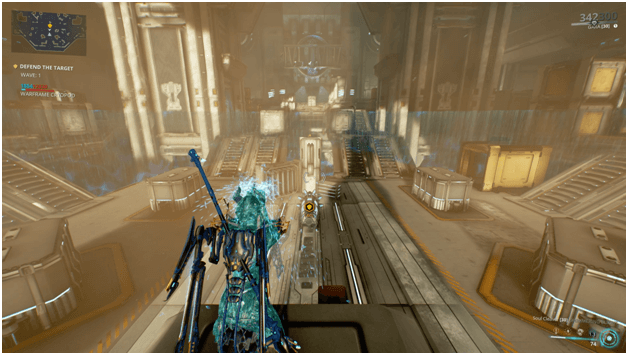 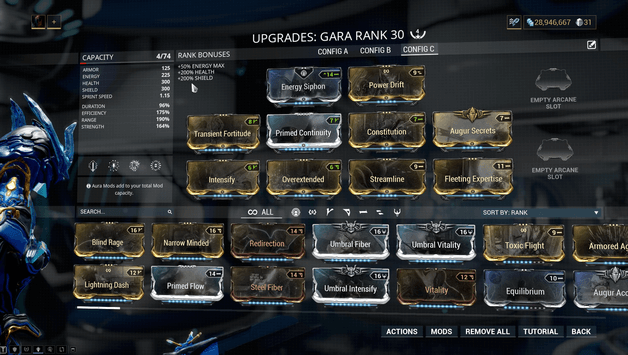 The Efficiency Build offers less energy cost when casting abilities while the other stats are slightly reduced.

This allows the user to repeatedly cast most of Gara’s abilities due to the reduced energy cost.

This build goes well with those who tend to use Gara’s abilities in several situations and will give the advantage of being able to cast them several times or cast all of her abilities whenever needed. 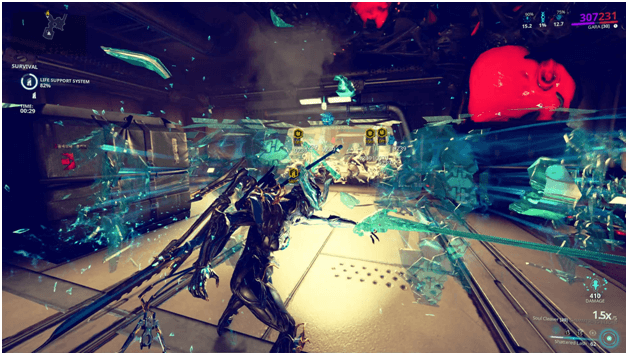 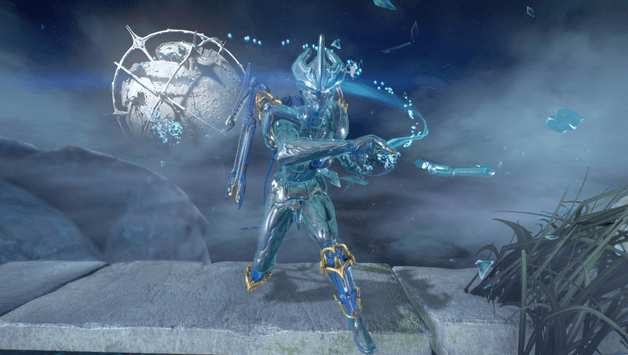 Gara can be great in the hands of both new and old players which might be a bit tricky at first for some because of the synchronization of some of her abilities.

Her Mass Vitrify is a very popular ability which can be used in different ways making it a very unique ability capable of damaging large areas, protecting targets, crowd control in a large radius and blocking of paths.

Shattered Lash is a very good damage dealing ability and can sometimes wipe a whole area clean while her Spectrorage is good for controlling and area and keeping enemies busy.

Splinter Storm is one of her useful abilities that may take some time to understand but once the user does, they can cause it to increase in damage and stay active by making use of her other abilities.

Gara is great as an offensive and defensive Warframe, capable of defending large areas and blocking enemies from reaching their destination or annihilating them completely with wide damage abilities.

This fragile looking Warframe is not so fragile and instead makes it seem like those who dare cross her become the fragile ones, instantly falling to her deadly attacks.