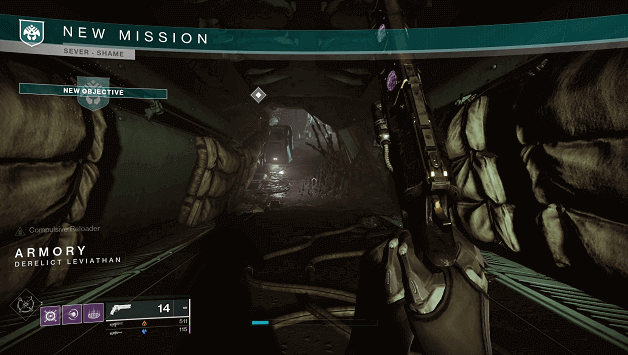 After much preparation, Eris is now ready to perform a ritual of severance which is meant to break Calus’s connection to the lunar Pyramid.

You will be journeying deep into the Leviathan’s Underbelly along with Crow, facing the nightmares as you make your way towards your goal.

The ritual requires that you place Ritual Amplifiers in specific severance sites and afterward, you and Crow will need to meet up to perform the ritual.

How To Get Sever Shame Mission?

The Sever Shame mission becomes available once you have reached step 3 in the Bound in Sorrow quest, requiring that you complete it to proceed. 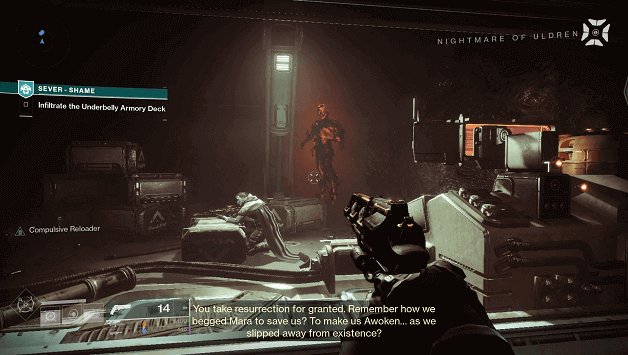 At the start of the mission, you will be inside the Leviathan’s Underbelly and will need to head to the waypoint which marks an objective behind a locked door.

Look above the door and you will see a glowing part that you need to destroy to reroute power to open the door so you can place the Ritual Amplifier inside.

Interact when you are prompted to place the Ritual Amplifier and make your way to the next area, there will be a round entrance blocked by a barrier.

Just before you approach the round entrance, there will be a door to your left which is opening and closing that you need to enter.

Once you head for this door, it will open up and you will need to destroy the power sources, to remove the barrier so you can make your way inside.

Make your way through the narrow pathing and find your way going to the next waypoint where you will be led to another barrier.

You will need to destroy the nearby spores to activate an Egregore Link so you can pass through, allowing you to move into the next area.

2) Clear the Armory of Calus’s Loyalists

After you exit the area, Loyalists will appear and begin to attack you, requiring that you defeat all of them to reach 100% progress.

After clearing the enemies, the power will go out and more enemies will appear, making their way toward your location.

Clear out the enemies in the area and a mini-boss named Val Dumoar Sentinel Commander will appear, who you must defeat to move on.

Once you have defeated Val Dumoar Sentinel Commander, clear out the remaining enemies and make your way to the waypoint.

As you approach the waypoint you will find Crow positioned in another room with a Nightmare haunting him as he tries to focus.

After a short dialogue between them, the doors to the left will open and you will need to head inside to activate the Manual Override.

Make your way through the hall and fight your way past enemies that appear once again and you will notice that there is another barrier blocking the way.

Head to the room opposite the blocked path and follow the power line to find another electrical object to destroy to open up a door.

Inside the room will be spores which you will need to damage to activate the Egregore Link again so you can pass through the barrier.

There will be explosive objects in the room and you will need to destroy them before you can fit through the small passage to the right.

Make your way through the small space while timing your movements to avoid getting damaged by fire in the area and place the second Ritual Amplifier when you get out.

You will find yourself in a room with no power and to activate the door you will need to search for all the Manual Overrides and activate them.

During this time, an Unrelenting Nightmare will be following you (he can’t be killed) just like out of a horror movie, chasing you as you find the Manual Overrides.

You will need to first grab a large wrench (which slows you down) and make your way to the energy source to redirect the power.

Once this has been done, you can now make your way to each of the remaining Manual Overrides to open up the locked door.

Continue making your way towards the waypoint by fighting your way through the Scorn enemies in the next room and you will need to set up the third Ritual Amplifier.

Destroy the power source to the right of where you placed the Ritual Amplifier and you will then need to make your way towards Crow, marked by the waypoint.

6) Being The Severance Ritual with Crow

Crow will be standing in the large arena and a Nightmare will be following him, you will need to interact with him to start the ritual.

7) Defeat the Nightmare of Fikrul

During the ritual, the Nightmare of the Fanatic will appear and begin to attack you, which requires you to fight back as Crow will be occupied with the ritual.

During the fight, the Nightmare of Fikrul will attempt to head into the outer room and summon enemies to attack you. 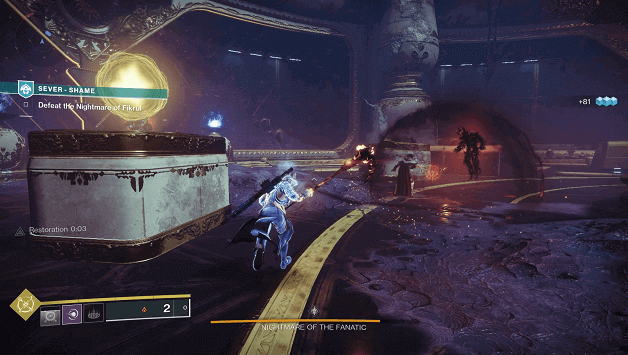 You will need to clear the enemies to open up a portal that brings you to the outer room where the Nightmare of Fikrul will be.

Fight through the enemies and do as much damage as you can to the boss as you chase him to the end of the path.

You will eventually be teleported out and will need to repeat the process of clearing the enemies and the boss through the portal until you defeat him.

After a while, clearing out the enemies will cause a “dreadful blade” which is a scythe that you can use to deal massive damage to enemies, especially the Nightmare of the Fanatic.

Once the Nightmare of the Fanatic has been defeated, you will be teleported back to Crow who will be having a dialogue with his Nightmare before the mission ends.

Completing the Sever Shame mission will unlock the next step in the Bound in Sorrow quest as well as allow you to open a chest for rewards if you have 1 Bound Presence. The Sever-Shame triumph will also be unlocked after you have completed the mission. 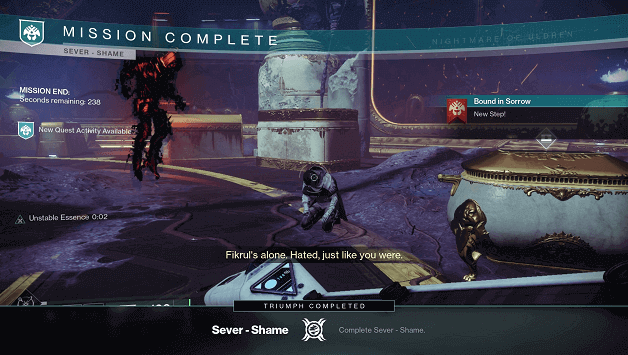 Crow is burdened by being unable to overcome the shame of his past life and seems to have suffered a crushing defeat at the hands of his Nightmare.

As Eris Morn has mentioned, there will be a next time and eventually, Crow should be able to overcome his past.

For now, you will need to keep your eyes on Crow and see how he is doing by visiting him in the H.E.L.M. after the mission.