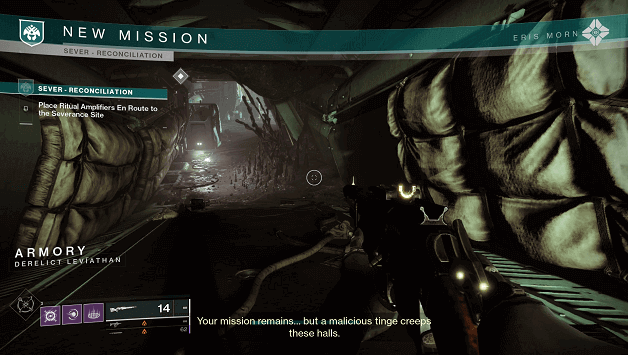 You and Crow are back at the Derelict Leviathan to reattempt another Severance Ritual but it looks like some steps must be repeated first.

To proceed with the ritual once more, you will need to check the sites where Ritual Amplifiers need to be placed as there has been interference.

Crow now appears to be ready to face the Nightmare of Uldren Sov once more, but it is yet unknown if he will be able to do so completely.

How To Get Sever Reconciliation Mission?

The Sever-Reconciliation mission is available after you have completed quest step 9 in the Bound in Sorrow seasonal quest during Season of the Haunted. This becomes your objective to complete quest step 10. 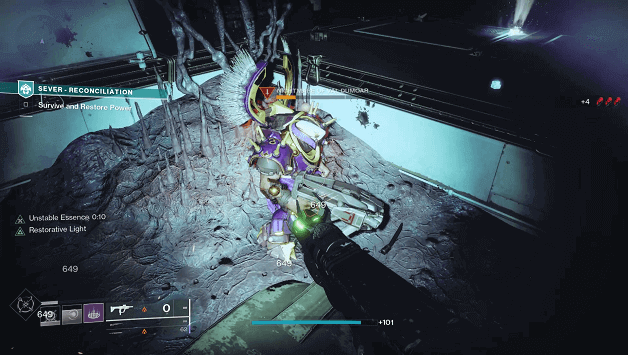 The Ritual Amplifiers that you have previously placed during Sever-Shame are now down and you will have to place them again.

Make your way to the first waypoint and place the first Ritual Amplifier and continue by going to the end of the hall and turning left to destroy the power sources in the room.

Exit the room and enter through the small round entrance on the left and make your way to the end, following the waypoint.

Before you can proceed into the next area, you will need to attack the spores at the side of a barrier able to get the Egregore Link buff to pass through.

The next area will be very dark with enemies arriving and you will need to clear them all out, including a mini-boss called Nightmare of Val Dumoar. (Same one from Sever-Shame)

Once you have cleared out all the remaining enemies, make your way towards the next waypoint where the Crow will be, confronting the Nightmare of Uldren Sov again.

After Crow finishes speaking with the Nightmare, head to the room to the left and activates the Manual Override before heading into the end of the hall.

Just before you reach the end of the hall, you will see a locked door to the left, and the opposite of that is a path where you will need to destroy its power source. 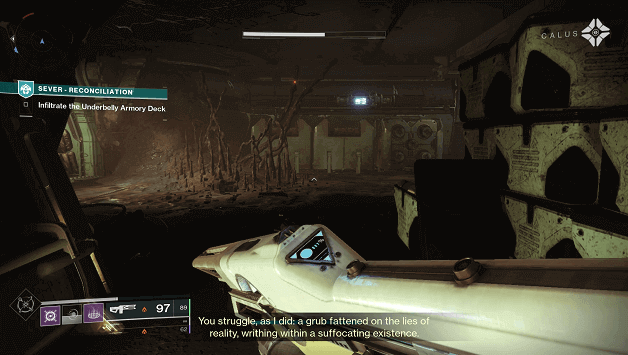 After destroying the power source, the door will open up and you will be able to attack the Egregore Spores so that you can enter the next area.

Follow the path which will lead you to the next Ritual Amplifier placement area and put it down, then make your way to the waypoint.

You will reach a Loyalist Barrier and will need to hack it by interacting with the nearby console, but Ghost will need you to collect Psion Decryption Keys first.

The Psion Decryption Keys are carried by Loyalist Psions and there will be 5 in the area which will drop the keys when they are killed.

Some of the Loyalist Psions will be invulnerable and you will need to defeat the Psion Commanders that area near them to take out their shields.

While doing this, the Unrelenting Nightmare will be chasing after you (cannot be killed) until you find all the keys and leave through the exit.

5) Being The Severance Ritual with Crow

Once you are through the next area, continue making your way towards the waypoint to place the next Ritual Amplifier.

After placing the Ritual Amplifier, make your way to the Severance Site where Crow will be waiting for you along with the Nightmare of Uldren Sov still pestering him.

To make your way to the Severance Site you will first need to destroy the nearby power source to the right of the locked door, which opens it.

6) Defeat the Nightmare of Fikrul

Interact with Crow, who is waiting at the Severance Ritual site, and the Nightmare of the Fanatic (Nightmare of Firkul) will spawn into the area.

A portal will open nearby and you will need to follow him through it and continue attacking him before you are teleported back.

After being teleported back, you will be facing enemies in the ritual site, which requires you to clear them before being able to enter the portal again to the outer area.

Once you enter the portal again, you will be able to pursue and attack the Nightmare of the Fanatic again.

This must once again be repeated until you have defeated the Nightmare of the Fanatic and after, you will be teleported back.

Crow will have some dialogue with the Nightmare of Uldren Sov and afterward, the mission will come to an end.

Completing Sever-Reconciliation will allow you to continue with the Bound in Sorrow quest by allowing you to continue to quest step 11. There will be a Bound Chest which you can open if you have 1 Bound Presence to get additional rewards as well. 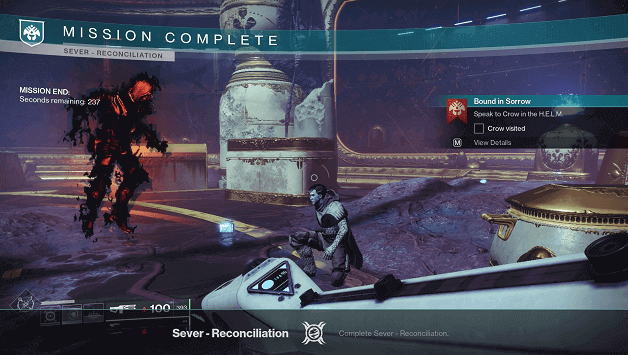 The Crow once again confronts the Nightmare of Uldren Sov but this time things are different, and this time he can change things.

Now that The Crow has been able to confront his past, the Nightmare of Uldren Sov becomes the Memory of Uldren Sov and the two seem to cope now.

The Crow has finally confronted his past and the Severance Ritual has weakened the Leviathan’s connection to the Pyramid, but more needs to be done.