Sometimes the fighting will get rough and when you decide to go full-on melee mode and rush into battle, the Battle Tartare is a perfect consumable to have.

This consumable grants you increased melee damage, move speed, and damage resistance as well as a boost in your stamina regeneration.

Unlike most consumables though, the Battle Tartare has its drawbacks, which cause you to lose health and become dehydrated and hungry faster.

After consumption, players will be under the effects of the Battle Tartare, granting them a 60% increase in melee damage and 50% more movement speed.

Aside from that, you also will gain 15% damage resistance along with faster stamina regeneration to help you continue moving and fighting.

The drawbacks include an increase in food and water consumption by 50%, which makes it important to have other food or water to eat.

Additionally, you will lose 0.45 health per second, which leads to a loss of 81 health altogether at the end of the effects over 180 seconds.

How to Make Battle Tartare (Recipe) 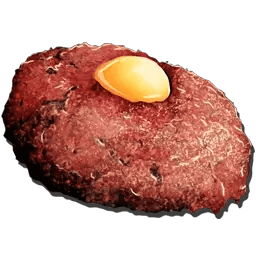 The Battle Tartare can be cooked in a Cooking Pot or an Industrial Cooker, which must have a supply of water and fire to cook.

Below are the Battle Tartare ingredients:

Most of the resources can easily be obtained through Crop Plots and farming but the meat required needs to be obtained from specific creatures.

The Battle Tartare ID for spawning is: cheat giveitemnum 250 1 0 0

Sadly, the Battle Tartare can only be consumed by humans, and placing one in a Dino’s inventory will make the consume option unavailable. You can however store these in a tamed creature to prolong its expiration so that you can get it later on when you need to consume it.

In the heat of battle, using a Battle Tartare can make a huge difference, giving you more than half additional damage with your melee attacks.

The additional movement speed makes it easy for you to chase enemies or escape deadly situations but you should be prepared for the drawbacks.

Having this consumable on hand works well in almost any situation and is a favorite for those who tend to raid using a Tek Sword.