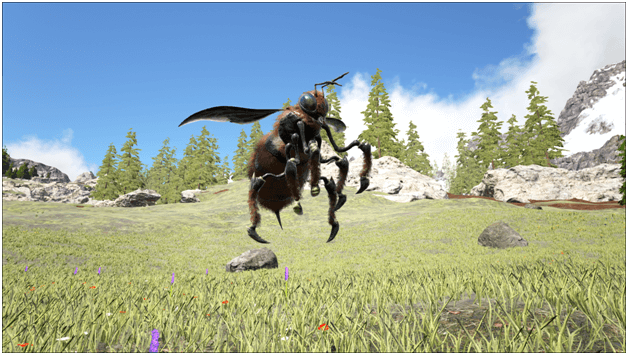 Apis Lithohermaea is a large territorial insect with a herbivorous diet that existed during the middle Miocene period.

These creatures usually mind their business and stay within their hives which hold normal Giant Bees as well as the sometime the Giant Queen Bee.

Hives can usually be found around most of the areas and will release Giant Bees if attacked and the Giant Queen Bee occasionally if destroyed.

A Giant Queen Bee that has been approached by a survivor or their tames will summon other Giant Bees to protect it, attacking and disrupting the survivors functions.

Tribes do not usually leave the Giant Queen Bee out in the open but instead pick them up and have them make a hive where it and its Giant Bees will both create honey and defend the area. 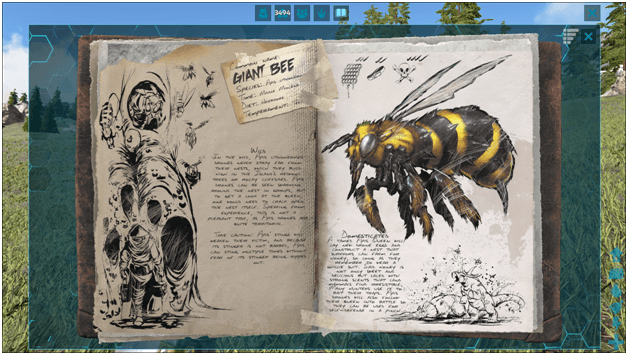 These creatures are barely seen out in the open and will usually only respond once their hive is threatened.

While they cannot be found flying around regularly, the hives in which they reside can be found near mountains and in redwood forests as well as certain other areas of land where they can peacefully live.

Once a Giant Queen Bee has been domesticated, it will be able to create its own hive where its owner chooses where it, along with the other Giant Bees will start creating honey and often defend the hive. 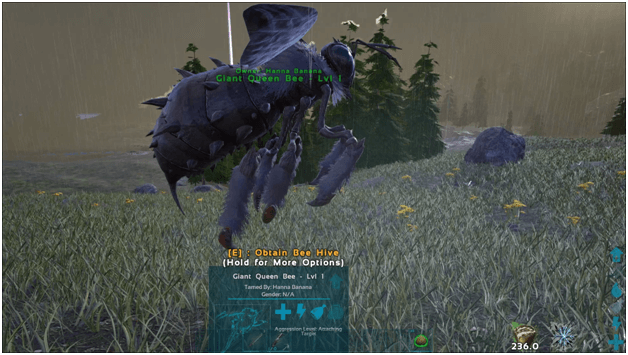 Once you have tamed a Giant Queen Bee, you have the option to pick it up by interacting with it which shows the option called “Obtain Bee Hive” that will be the first interaction available when you approach it. 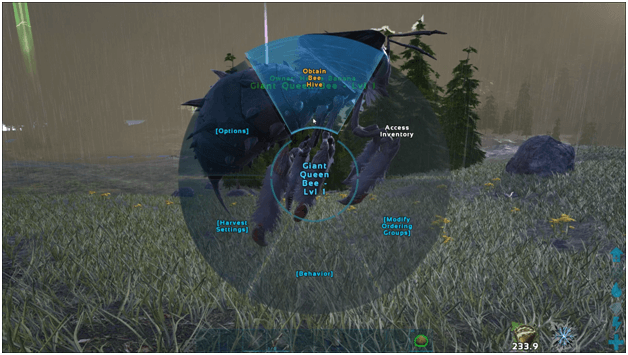 You may also select this from its command wheel which will also result in you taking the Giant Queen Bee and adding a Bee Hive into your inventory. 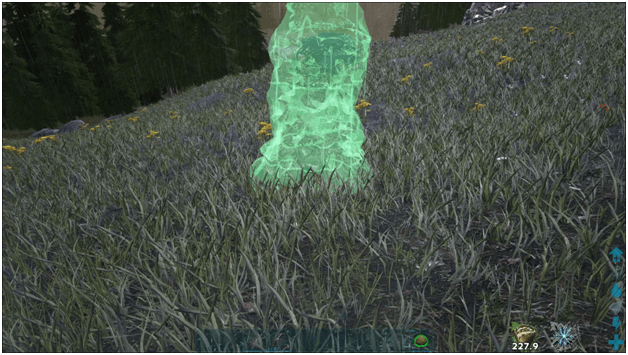 You may use the Bee Hive which acts similar to placing a structure and may place this down to have a live Bee Hive that you can place Rare Flower inside which will cause it to generate Giant Bee Honey over time. 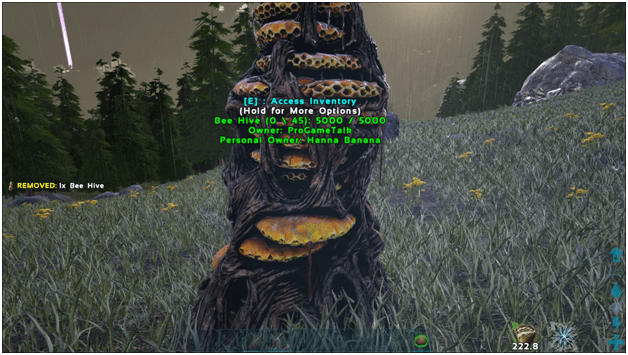 The Bee Hive will grant honey that can be collected from it over time as long as there are Rare Flowers in it but be sure to wear a Ghillie Suit as you may be damaged by opening up the Bee Hive.

The Bee Hive may be used straight from your inventory and may be collected any time again by demolished the structure which will release the Giant Bee Queen once more, still tamed by you or your tribe.

While the Giant Bee/Giant Queen Bee alone does not provide the resource, the Bee Hive that can be placed down that is collected by picking up the Giant Queen Bee does which supplies tribes with a stable source of Giant Bee Honey.

When provoked, the Bee Hive will release Giant Bees that will fend off attackers as a defense mechanism.

How to Tame Giant Bee? 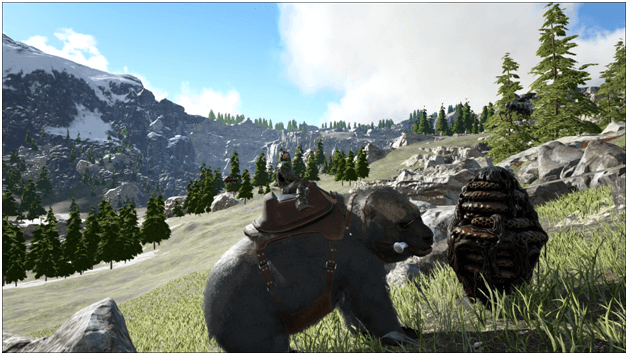 Using a weapon or a tame, you can easily destroy the Bee Hive but be sure to use a Ghillie Suit for protection against the sting effects or use a Dire Bear to be safer.

Using Bug Repellant is a good way of remaining safe from the Giant Bees and good for sneaking up on the Giant Queen Bee once it is out in the open. 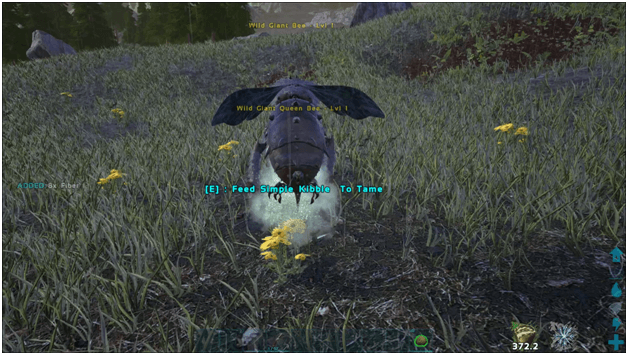 Once you have destroyed the Bee Hive, the Giant Bee Queen will be flying around and will summon Giant Bees if it notices you.

You can either attempt to sneak up on the Giant Queen Bee which will require a Ghillie Suit and Bug Repellant or you can quickly run up towards it and interact with it (make sure you have taming food in your last item slot) to feed it.

If the Giant Queen Bee senses you before you get to feed it, you will be unable to interact with it for a short amount of time and will need to keep your distance until the aggression is gone.

Giant Queen Bees will spawn Giant Bees that will attack you so its best to be as quick as possible.

Our most suggested method is to do a quick sprint towards the Giant Queen Bee and feed her and run away, repeating this until tamed.

The Giant Queen Bee cannot be ridden nor can it be mounted but it may be collected to provide a Bee Hive structure.

Giant Queen Bees cannot be bred and instead you will need to more than one if you wish to have several of them.

Giant Queen Bees can be found after destroying the Bee Hives they live in which are usually found around different areas such as redwoods, mountains and other plain areas. 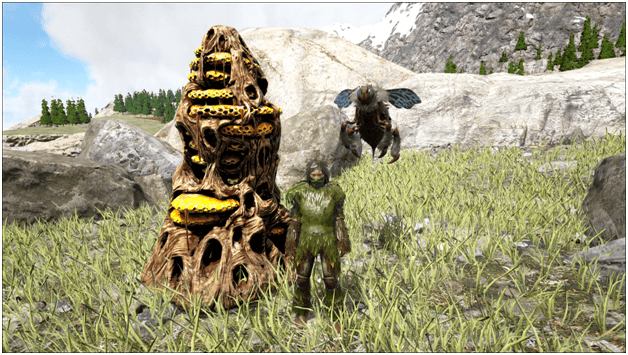 While Giant Bees are not usually tamed for their ability to fight or do pretty much any tasks, they do provide their owners with a few benefits such as honey production and a small amount of defense once a Bee Hive has been set up.

There are many uses for Giant Bee Honey in the Ark which makes having at least one or two Bee Hives of your own around which requires that you tame Giant Queen Bees for an unlimited supply.

These creatures although seeming too dull to do anything do provide a lot of a lot more to the tribes than most would expect.

How To Make Calien Soup in ARK