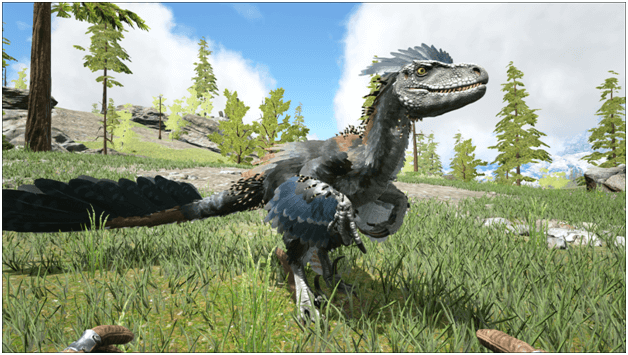 The Deinonychus Magna Pede is a carnivorous creature with an aggressive temperament that was first seen during the Cretaceous epoch.

One of the few reptilian creatures that have feathers along with scaly skin, the Deinonychus also have sharp claws that they use to latch on to their victims as they rip and tear with their sharp teeth.

In the wild, they are very aggressive, especially to those who get close to their nests and will viciously attack creatures while feeding on them while they are still alive.

When approached by humans, The Deinonychus tends to just pounce on the unsuspecting human and shortly after, begin ripping them apart.

Once tamed, they can be led as packs and that work together in order to bring down both multiple creatures of their size or smaller and even take on larger creatures, fighting as a single unit. 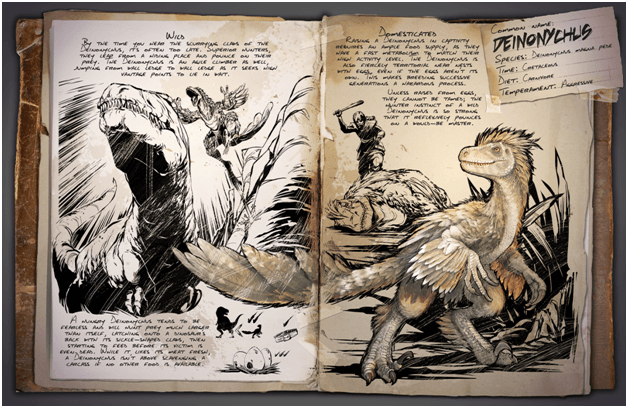 Being Proficient ambush creatures, Deinonychus can lie in wait from cover and even while hanging from sheer cliffs or ledges with their massive claws to have the advantage on their unsuspecting victim.

The Deinonychus is a fearless hunter that will even attack creatures much larger than itself for a meal, even if that meal is still alive and in times of desperation, they will not pass up even an already dead creature to feed on.

Raising a Deinonychus is kind of a handful, due to their metabolism and being an energetic creature that eats almost twice as much meat for a creature its size.

It is impossible to tame a Deinonychus due to their high intellect and extremely aggressive behavior which has resulted in survivors attempting to steal their eggs and raise them from the moment they hatch. 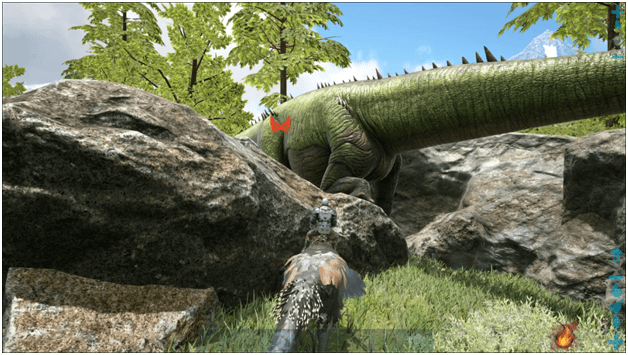 The Deinonychus is capable of pouncing on larger creatures in an attempt to hang on to them white it attacks.

If a creature pounceable by the Deinonychus, there will be a reddish bite icon which symbolizes that they are a valid target for the ability. 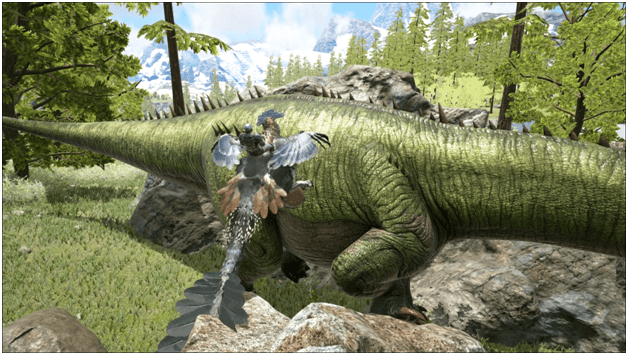 The creature may then jump towards the valid target and will automatically latch on, dealing damage as it remains latched to its target. 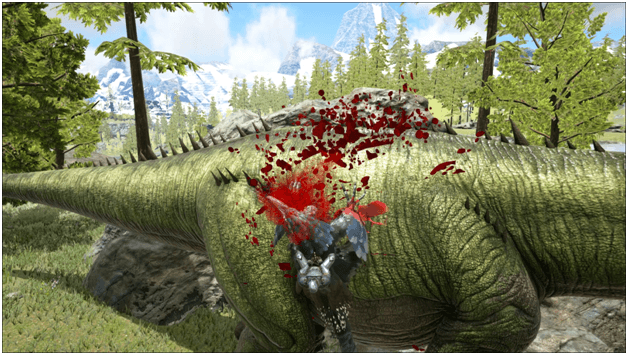 While latched onto a target, the Deinonychus can bite and tear chunks out of the creature, causing even more damage.

When the Pounce icon is visible, press the jump button/key to latch on to the target. 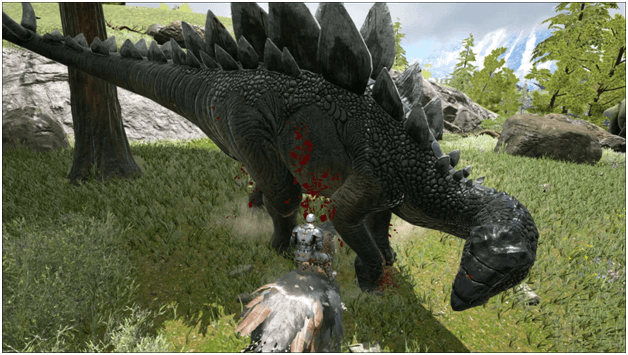 Their natural attacks can cause creatures to bleed out, causing them to take damage over time which can also stack up to 5 times over a duration of time.

The bleed debuff stacks on enemies individually and each have their own timer of 7 seconds before ending but each attack will reapply a stack.

Bleed damage initially does 1% of the total health of the target and 0.125% per additional stack which adds to a total of up to around 1.5% health. 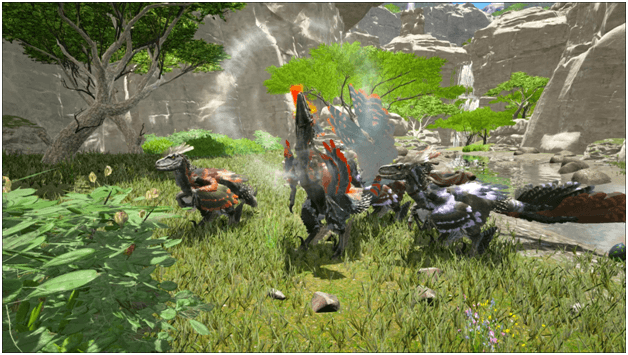 Once an alpha has been appointed by having 2 or more Deinonychus together, the Roar ability will be usable.

Using the Roar ability will cause the alpha to do a screeching roar which is imitated by the other Deinonychus, giving them 50% increased damage as well as reducing the damage they take to around 60% instead of the full amount of damage delivered.

Deinonychus are pack fighters and will be able to deal a lot of damage when led by the highest level one of the pack which is automatically appointed as the alpha.

The alpha may use the Roar ability to boost both the damage and damage resistance of the whole pack, making all of the Deinonychus more efficient.

Multiple Deinonychus may take down larger creatures and latch on at the same time, making these creatures easier to kill.

The Deinonychus is fast on its feet and may leap across long distances, making it a good scout as long as the creature’s stamina is sufficient.

The bleed damage that is caused by the Deinonychus allows it to deal a good amount of damage over time as well as initially when attacking enemies.

Enemies that are affected by the bleeding debuff have their movement speed slowed down, making the Deinonychus useful for preventing the escape of such creatures.

How to Tame Deinonychus? 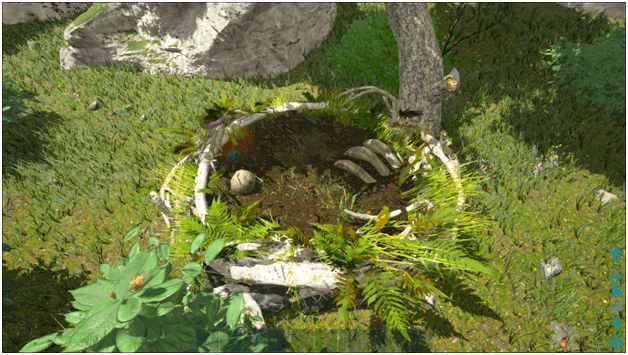 Deinonychus cannot be tamed when they are full grown and can only be fought in the wild but their eggs may be stolen from their nests. 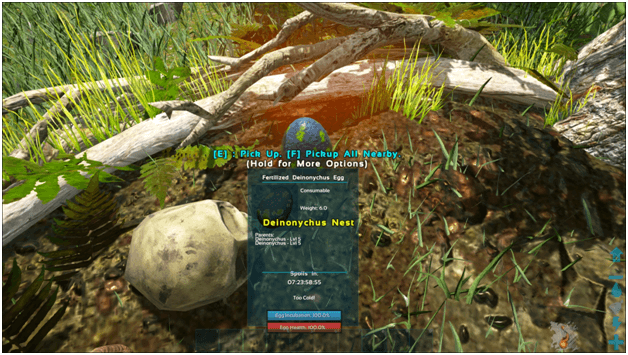 One must simply find a Deinonychus nest which is usually nearby where these creatures can be found running around in order to  steal an egg to hatch and raise a Baby Deinonychus later on.

Deinonychus need to be fed meat as a baby and will naturally eat any type of meat later on when fully grown. 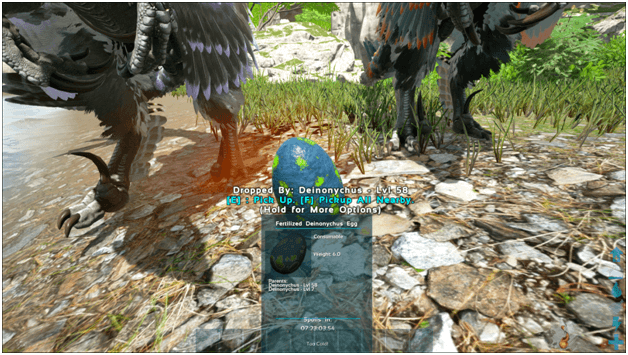 As an egg laying creatures, the male and female Deinonychus will have to mate for the female to lay a Fertilized Deinonychus Egg that is dark blue in color with green spots.

Deinonychus can usually be found on the upper plateau where they nest and hunt creatures below.

Maps where there are Deinonychus:

The following is the area  where the Deinonychus can be found 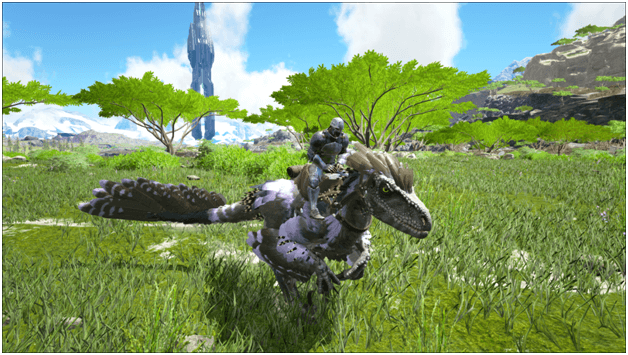 As violent as the Deinonychus may seem in the wild, their fearless and aggressive nature makes them an ideal mount for some tribes to seek out and take the risk of getting attacked for these prized creature’s eggs to hatch and domesticate.

Being a great hunter and protector, the Deinonychus is used by tribesmen for their natural gifts to have the advantage on enemies or wild creatures that they are hunting.

What these creatures lack in stamina and durability, they make up for when grouped with the same species, making a fight against several of these creatures a terrifying and sometimes fatal experience.