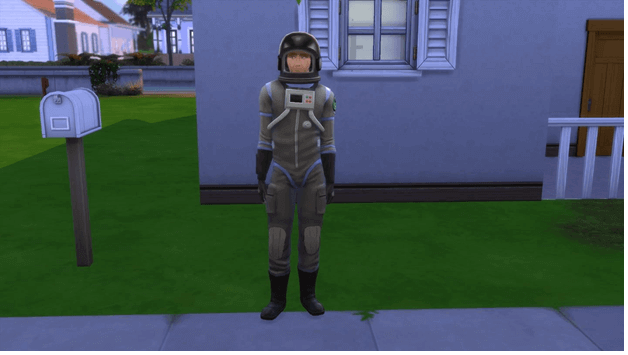 If you have decided that you want your Sim to delve into space adventure and exploration, you may have chosen the Astronaut career.

This career mainly focuses on space exploration and will have your character move up the ranks from a simple Intern until they finally become an Astronaut.

Physical and mental preparation is required, and you will find that this career is one of the highest paying ones and is quite fun.

Prepare for off-world adventures and new discoveries to be made with the Astronaut career and its branches that you can shift to later on.

Being an astronaut requires that your Sim will be physically prepared and must have a high fitness level and the Bodybuilder aspiration is a great way for your Sim who wants to get into shape.

A bonus reward for completing the Bodybuilder aspiration is that they get the long-lived bonus, making them live longer lives.

Another important skill for an astronaut is logic, and your character needs to be smart to follow through with their astronaut career.

The Nerd Brain aspiration rewards your sims with the Handy bonus, allowing them to fix and upgrade things instantly.

The active trait allows sims to be more Energized, and this will be important as they tend to be more physical and will need to work hard to boost their fitness level.

Sims with the Active trait will have more fun when exercising, allowing them to work out more and prevent the lazy mood.

Going hand in hand with your Sim’s logic skill, the genius trait matches well with what an astronaut needs in terms of knowledge.

Sims with the Genius trait will enjoy building up their logic and will often have a Focused mood, making it easier for them to concentrate and enjoy activities that benefit the logic skill.

As you start out from Intern until you become a Technician, you will need to increase your Logic skill and need to play chess daily to get promoted.

When you become a Command Center Lead, you will need to start focusing on your Fitness skill and be required to Work Out daily.

Later on, as you change from Astronaut to one of its branches (Space Ranger or Interstellar Smuggler), you will need to learn and increase the Rocket science skill.

For Sims who wish to enroll in a University, taking up the degrees for Physics (Space Ranger) or Villainy (Interstellar Smuggler) which can help in their space adventures later on.

The first steps in your Sim’s career as an Astronaut begin with them starting as an intern. This, of course, does not bring them into space just yet and instead has them working in a file room, where they categorize expense reports.

You have gotten through being an intern and have moved to be a module cleaner. This pretty much puts you in charge of keeping the shuttles clean. Your Sim will be stuck with cleaning off the gunk that shuttles have when they come back. Hopefully, none of these contaminants are a sort of space infection.

Being a technician is an important role in space science, and at this time, your Sim is in charge of making sure things do not go wrong. The technician role is a great step to your sim understanding of how things work and allows them to ensure fellow workers’ safety.

As a Command Center Lead, your Sim has been placed into a more tedious and important role in the space program. Analyzing movement and running simulations are common and make things appear to you Sim as if they were playing video games.

Your Sim is getting closer to the real deal, but first, they must focus on low-orbit essentials such as satellites, space stations, and more. When it comes to high altitude events, your Sim is most likely the one who will detect such things and allow others to prepare for anything.

As a Space Cadet, your Sim is almost there, and soon enough, they will be an astronaut, but first, they need to learn more than just the basics. Your Sim is currently preparing to take on an astronaut’s role and is going through simulations and minor tasks until ready.

Finally, you have become an astronaut, and all of the hard training and countless days of taking on simulations have finally paid off. It is time for you to start exploring space and discover what lies beyond the reach of your planet. 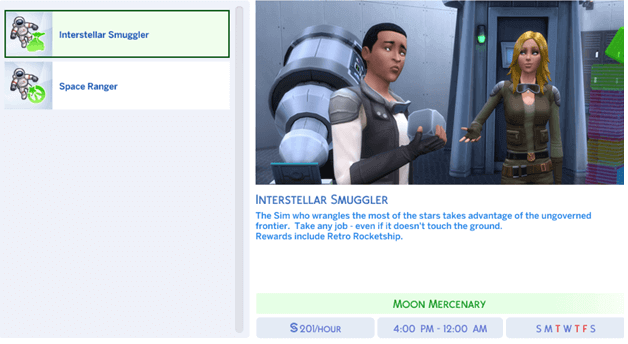 Getting on the shadier side of space exploration, you have become a Moon Mercenary, a gun for hire that earns money the way you feel fit. It may be a shiftier side when making money, but the pay is good, and you don’t have to be controlled by the public.

Your Sim has become quite the trader and collector of exotic items, ranging from important ship parts to alien poached items. You make your money off of trading alien goods that others cannot get their hands on and do a pretty good job at it.

Your Sim has become the best of the best and can’t be stopped no matter how difficult or dangerous a job may be. As an Interstellar Smuggler, your Sim is capable of getting anything they are tasked to do, even it puts them in danger as long as the pay is good.

A natural guard of the planet and areas in space, your Sim is doing their part in keeping the peace and safety around them. Although you may be stuck with certain patrol tasks, the pay is good, and your Sim gets quite the view every now and then.

Sheriff of The Stars (Rank 9)

Nothing is better than having your own jurisdiction as you are now a Sheriff of the Stars and a keeper of the peace. No matter what kind of intergalactic danger there is, Sim is ready to keep things in order.

The ultimate space guardian around, your Sim is now a Space Ranger, a role model to those who keep justice in space. Your Sim is at the highest rank when it comes to defending space from the forces of evil as a Space Ranger.

How To Build a Rocket Ship?

To do a Sims 4 Astronaut mission, you will first need to build yourself a Rocket Ship which can be done by purchasing the “Steampunk Flyamagig.”

You can easily search for the different Space Ships available by typing “rocket” in the search area when in buy mode.

Once you have purchased a Rocket Ship, you can start building it, which will cost $1000 and continuously increase your Rocket Science skill.

Further increases in the Rocket Science skill will allow you to upgrade the Rocket Ship further for more successful missions.

The right Astronaut house should have a big space for you to place your purchased Rocket Ship crafting structure.

How To Do Space Missions?

Once your Spaceship has been finished, you can choose to have your Sim “Explore Space” by interacting with the ship.

The adventure is done via popups that appear with descriptions, and you will need to choose steps that your character will make as they explore.

Once the exploration has been completed, your Sim will return and bring along certain collectibles depending on how the mission went.

When it comes to Astronaut chance cards answers, these are mainly affected by the choices you make and rely on some of your Sim’s traits and skills. 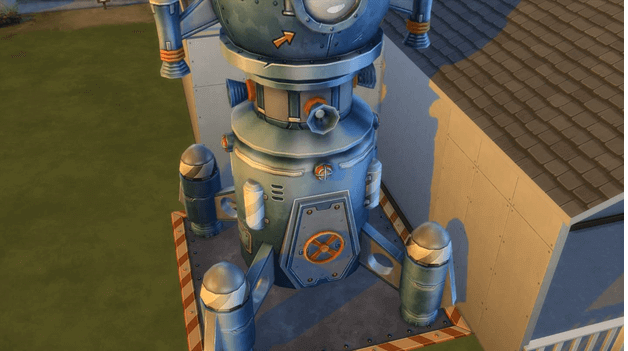 The Astronaut is one of the highest paying careers in the Sims 4 and has a large expansion about it when it comes to what you can get out of partaking in such a career.

While the Astronaut career alone is pretty awesome, you get to choose between becoming an Interstellar Smuggler or a Space Ranger as you progress.

Eventually, each career puts you in a position where you will be building your Rocket Ship and explore space from time to time.

This is a great way to get collectibles to add to your Alien Collection and Space Rock Collection.

Sims 4: Alien Collections Guide (How to Get, Live & Dead Collectables)