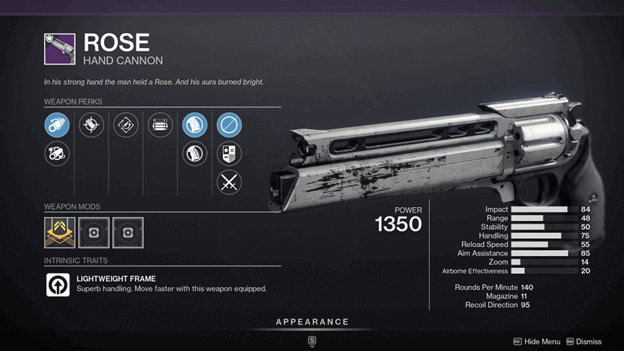 “In his strong hand the man held a Rose. And his aura burned bright.”

Some players value this weapon for its effectiveness in PVP and it does pack a punch while adding the benefit of being easy to handle.

How To Get Rose Hand Cannon?

Rose Hand Cannon is returned as a reward in Season of the Seraph, which can be obtained by completing Dividing the Ladder quest from Lord Shaxx.

Not only will you be able to get Rose from completing the quest, but it will also come with Deepsight Resonance.

Dividing the Ladder quest simply requires you to do Crucible activities, which do not require you to win but simply complete them.

Rose has a balanced barrel.

Improved accuracy and range on the opening shot of attack.

Rose has a grip made of lighter material.

This can be changed to Textured Grip, which increases the friction of the weapon, granting greatly increased handling speed and slightly decreased stability.

Since Rose Hand Cannon is a legendary weapon, it is possible that it may have different roll when acquired each time, making it lucky if you get the perfect stats.

Aside from the roll which may be changed, you will be able to toggle between different perks, if Rose has them.

Although the Rose can come with Deepsight Resonance, it does not appear to be available for shaping at the Relic on Mars.

Some players who have obtained Rose legendary weapon in the past know it well for being good in different situations thanks to its weapon perks.

Rapid Hit can make it easier to dish out damage quickly thanks to its increased reload speed, while the stability makes it more efficient to use.

If you can get several precision hits on your enemies, you will most likely have an easier time clearing them out in seconds.