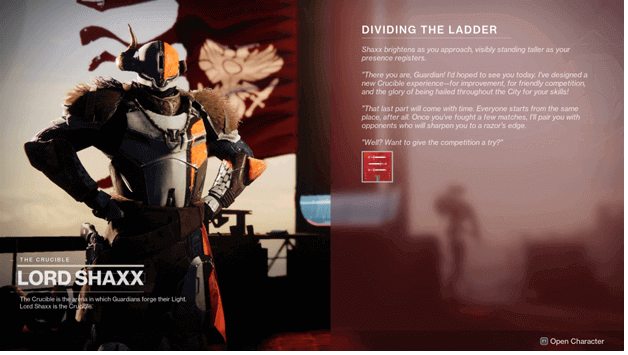 Playing Crucible matches can be quite challenging sometimes, especially if you go up against players who are way above your skill level.

Therefore, during the Season of the Seraph, the ladder system was added, allowing players to find their ranks as they start out during the season.

The Dividing the Ladder quest is an introduction to this new system and will be your first steps to getting your position in the Crucible.

How to Get Dividing The Ladder Quest?

Dividing The Ladder quest became available upon the arrival of Season of the Seraph and can be obtained by speaking to Lord Shaxx at the Tower. 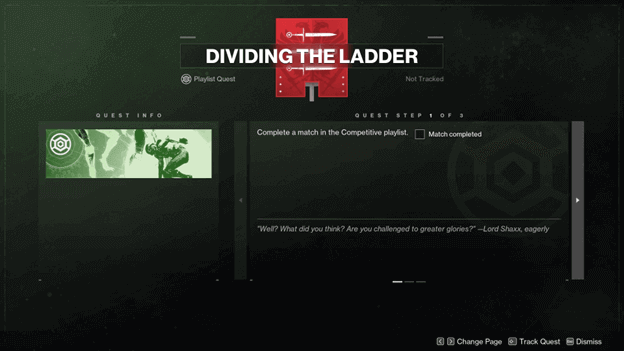 Step 1: Complete a match in the Competitive Playlist

After speaking to Lord Shaxx and obtaining the Dividing the Ladder quest, you will need to head over to your destination tab and do a Crucible match.

Only matches selected from the Competitive playlist will count towards this objective, so be sure to pick out the right one.

Step 2: Complete Your Placement Series Matches To Establish Your Starting Position On The Tiered Ladder.

Now that you have gotten a taste of the Crucible once more during the season, its time for you to complete a set of Placement Series matches.

Doing this will allow you to find your position in the tier lists, allowing you to be placed with players of the same skill when it comes to matchmaking.

You will need to complete 7 Crucible Competitive Playlist matches and those that are not from the playlist will not count towards the quest step.

Step 3: Return to Lord Shaxx in the Tower

Now that you have completed your Placement Series, it’s time to head back to Lord Shaxx who will give you an ending dialogue about what you have gone through.

Completing Dividing the Ladder quest can reward players with a legendary weapon, some players have claimed to have obtained Rose, a legendary Hand Cannon with Deepsight Resonance.

The Dividing the Ladder quest is more of an introduction to how the Crucible has been changed and you may notice some things are different in the destination’s menu.

Players have gotten excited as they can now play against others who are at the same skill level, instead of being dominated by veterans that can kill you with their eyes closed.

Now that you have finished your Placement Series matches, you will now have a rank of your own and can start working your way up.