If you have ever tried swimming in the water and noticed it can be quite hard to reach certain areas due to the lack of oxygen, you are in luck.

The Lazarus Chowder is the solution to some of your troubles in the water as it will help you survive and give you a better chance of getting where you need to go.

This does not only help when you are underwater though, its ability to improve your Stamina Regeneration makes it useful in other situations as well.

Once you consume Lazarus Chowder, your oxygen depletion will be reduced by 15%, allowing you to swim underwater for a longer time. Additionally, Lazarus Chowder will also provide you with a bit of Stamina Regeneration, which works even while you are underwater.

Although the dish says that it will provide Health Regeneration, it currently does not and has not changed until now.

With a 15% reduction in the consumption of your oxygen, you can swim up to 6.66x longer, which can help you survive even the deepest parts of lakes, oceans, and underwater caves.

How to Make Lazarus Chowder (Recipe) 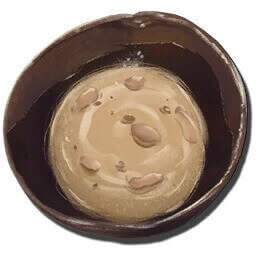 The Lazarus Chowder can be cooked in a Cooking Pot or an Industrial Cooker, which must have a supply of water and fire to cook. Below are the ingredients required for making Lazarus Chowder:

Any of the cooked meat items above can be used when you want to cook Lazarus Chowder as long as there is enough in the cooking station.

The Lazarus Chowder ID for spawning is: cheat giveitemnum 224 1 0 0

Does Lazarus Chowder Work on Dinos?

Previously, creatures were able to consume Lazarus Chowder when placed in their inventory and force-fed but this has been removed in earlier patches.

Only humans can consume Lazarus Chowder and if you place it in a creature’s inventory, the item will be darkened and unusable.

With Lazarus Chowder, you can survive and explore longer when you are underwater, which lets you dismount from your creatures and get through tight places.

This can be a backup for when your SCUBA Tank breaks while you are underwater and can even save your life several times when you least expect it.

The additional Stamina Regeneration can come in handy even when you are not in the water as sometimes you may need to run and recover quickly.