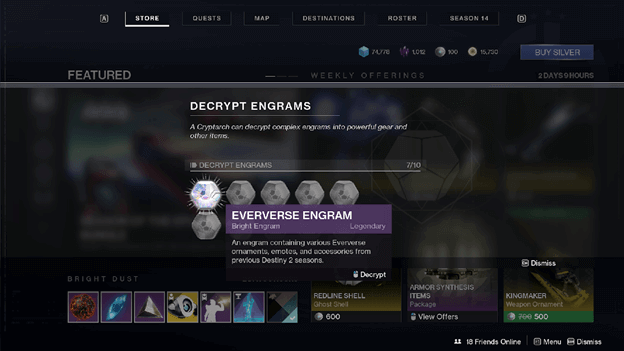 Eververse Engrams are some of the rarer yet not too hard to obtain engrams as these come as you progress through the game, especially when gaining levels with each season.

These engrams hold different cosmetic items which include ornaments for your gear, emotes for your player as well as accessories from previous Destiny 2 seasons.

There is no special location you need to head to open Eververse Engrams, you simply need to access it from the store.

Where to Get Eververse Engrams?

Unlike other engrams, Eververse Engrams are acquired through completion of tasks or gaining levels each season, instead of killing enemies.

One may purchase a Season Pass for more rewards but there are a lot of Eververse Engrams up for rewards regardless of having one or not.

To claim your Eververse Engrams, head to the Season tab (same group as Destinations or Map) and look for the corresponding reward you have that matches your level to accept it.

How to Open Eververse Engrams?

Eververse Engrams can be opened by opening your store and it is as simple as that, but others claim that you can head to certain locations to have it unlocked.

To save time and to make this simple, just open the then store tab which is also on the same menu as the Map, Destinations, and Season tabs.

Once you enter the store, your Eververse engrams will be the first things to pop up, which is the game’s way of telling you that you can unlock them now to make space for them.

Simply select the Eververse Engrams and they will be opened, going straight to your appearance tab located below your inventory on the inventory screen.

Eververse Engrams provide players with cosmetics, these can be equipped and unequipped as many times as you want (except for paint) for you to customize your character.

It is possible to obtain new vehicles, ships, and paint that can be used on your gear, vehicles, and more from Eververse Engrams.

Players can mix and match the items they get from Eververse Engrams to customize their character to have the perfect appearance that suits their style.

Eververse Engrams are free and can simply be obtained by playing the game and achieving levels each season.