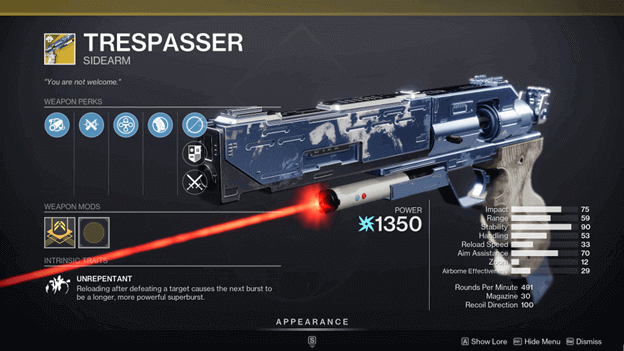 “You are not welcome.”

The Trespasser is an Exotic Sidearm that was introduced during Season of the Haunted and is well known for its burst fire capabilities.

What this weapon seems to lack in size, makes up for the sheer onslaught it can bring upon enemies when used accurately.

Capable of firing countless superbursts thanks to its weapon perk and traits, this exotic sidearm is perfect for picking off enemies one by one quickly.

How To Get Trespasser?

The Trespasser was a Seasonal Exotic during the Season of the Haunted which could be obtained at level 35 for players or instantly for those who purchased the Season Pass.

The Trespasser’s barrel has been optimized for distance.

The Trespasser is especially easy to grip.

Reloading after defeating a target with Trespasser causes the next burst to be a longer, more powerful superburst.

This allows you to deal more damage in a single shot with the Trespasser to deal huge amounts of damage to enemies.

The Be the Danger trait allows you to continuously reload automatically while firing bursts if you keep on defeating enemies with a single hit, perfect for Precision Shots.

The Tunnel Vision perk provides the Trespasser with greatly increased target acquisition and aim down the sight speed for a short duration.

This makes it easier to hit enemies with shots, including Unrepentant superbursts while also speeding up the speed at which you can aim down the sights of the Trespasser.

The Trespasser Exotic Sidearm can be an extreme weapon when used properly, requiring a reload to trigger what would be an onslaught.

Once Unrepentant is active, continuously taking down enemies will allow you to take them down one by one quickly, especially if you land Precision Hits.

While seemingly it would be this would be a backup weapon, it works well as a main, capable of killing several enemies in seconds thanks to its superbursts.