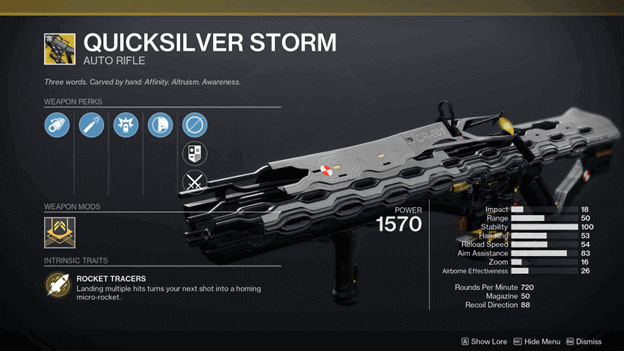 The Quicksilver Storm is an Exotic Auto Rifle capable of unleashing multiple sources of damage in a small amount of time.

Its ability to unleash loads of ammo, and grenades as well as homing micro-rockets makes it capable of shredding groups of enemies in seconds.

Nothing beats an enemy like an old fashion 3-in-1 weapon of destruction, perfect for any combat situation.

How To Get Quicksilver Storm?

The Quicksilver Storm is currently to be released in Destiny 2 Lightfall but players can get it early by purchasing the DLC ahead of time.

UNKNOWN: -said we were going home. I don’t wanna be on Ganymede. There’s no one here.

EXO: That’s the point, Tokki. No one dies if this goes gray goo on us.

EXO: This housing and frame replicate the scans I took. Not sure why it won’t fire.

Tokki: If this doesn’t work, may I have my pretty silver back? I like it better on me than on a gun.

EXO: Your accessory came from a gun. Someone in the outer system is using weaponized nanomachines. I haven’t seen that.

Tokki: That shouldn’t mean you can just take other people’s thing.

EXO: But I can’t figure out from the scans how the original design propelled anything.

Tokki: Isn’t why you kept that piece of the original barrel?

EXO: No. Someone spent some time etching that motto by hand. Seems respectful to keep it.

Tokki: I will never understand Guardians.

EXO: So, someone out there has a weapon I’ve never seen before, don’t understand, and don’t know how to defend against. The closest thing we’ve seen to this is SIVA, and these bugs are so far beyond that.

EXO: Get off that, Fish!

EXO: Dumb little critter. You’ll blow yourself up. Go on.

Tokki: My silver is moving, Elsie.

Elsie: So if this is the barrel…

Elsie: …and this is the magnetic bottle.

Elsie: Pulling the trigger should section off a round, but then what actually fires—

Tokki: WHAT DID YOU DO?!

Elsie: I didn’t change anything!

Elsie: The nanite colony must build each round with a… a solid-state impeller coil.

The Quicksilver Storm has a balanced barrel.

Shots fired from the Quicksilver Storm knock the target back further.

The Quicksilver Storm is optimized for recoil control.

Landing multiple hits turns the next shot fired by the Quicksilver Storm into a homing micro-rocket.

Currently, the Catalyst for the Quicksilver Storm is not available, but it will be once Lightfall released on February 28′ 2023.

The Quicksilver Storm is an extremely useful weapon in many situations, making it a good choice for dealing with single or multiple enemies.

The best way to utilize its perks and traits is to continuously hit enemies to provide you access to grenades for its grenade mode as well as to launch mini-rockets.

Imagine dealing damage to enemies in several ways with just one weapon, the Quicksilver Storm is like a 3-in-1 tank that you can hold.