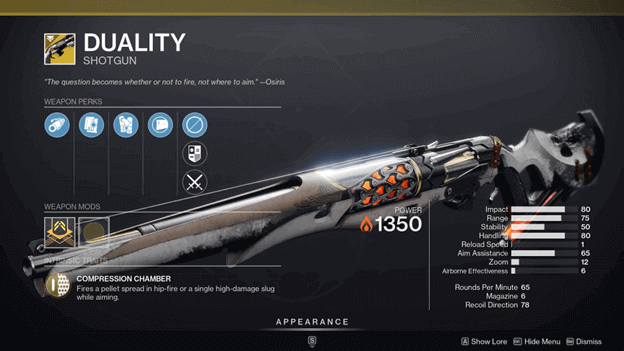 “The question becomes whether or not to fire, not where to aim.” –Osiris

Duality is an Exotic Shotgun that is useful at both close ranges as well as when you are further away from enemies.

Its handling has been greatly increased, making it easier for you to ready the weapon which can come in handy in combat situations.

How To Get Duality? 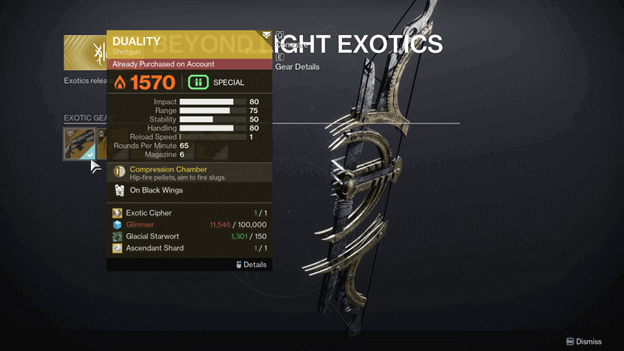 Duality was a Seasonal Weapon rewarded to players who progressed with their Seasonal Rank or purchased the Season Pass during the Season of the Hunt.

Now you can get Duality by heading to the Monument to Lost Lights at the Tower and purchasing it from the Beyond Light Exotics.

The following are needed to purchase Duality:

Duality reloads faster when the magazine is empty.

Duality is especially easy to grip.

When fired from the hip, Duality fires a pellet spread while aiming down the sights with the Exotic Shotgun fires a single slug.

Once the Catalyst for Duality has been obtained and unlocked, it increases the Exotic Shotgun’s range by 20 and magazine size by 2.

This allows you to hit targets further away from you, making it useful when aiming down the sights and the additional ammo allows you to fire more before reloading.

You can get the Duality Catalyst by completing the Walk the Line quest, which can be obtained from Banshee-44.

Duality may seem like just another Exotic Shotgun but there is more than meets the yet, its ability to be used at different ranges make it exemplary.

The damage from its widespread attack can take down stronger enemies in a split second, while you can also deal severe damage at long range with a slug.

This Exotic Shotgun provides you with a high amount of damage when fighting enemies up close or from a distance, making it a very situational weapon.