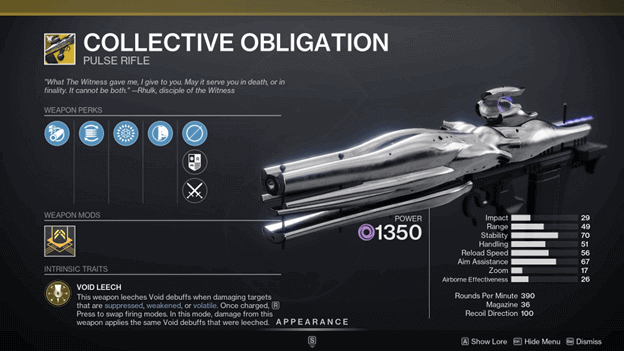 “What The Witness gave me, I give to you. May it serve you in death, or in finality. It cannot be both.” –Rhulk, disciple of the Witness

Collective Obligation is an Exotic Pulse Rifle that is capable of applying debuffs to enemies that you have previously leeched.

It can be considered that this Exotic Pulse Rifle is more tactical than most weapons due to the fact that you in a way choose certain debuffs to apply.

Capable of firing 390 rounds per minute, Collective Obligation can deal a fair amount of damage to enemies, especially once they are debuffed.

How To Get Collective Obligation?

Collective Obligation can be acquired as a random reward for defeating Rhulk during the Vow of the Disciple Raid.

Collective Obligation’s magazine is automatically reloaded when you gain Devour, a Void overshield or become invisible.

Collective Obligation has been optimized for recoil control.

Damaging targets that are with debuffs such as suppressed, weakened, or volatile will cause Collective Obligation to leach Void the debuffs.

Once charged, you may press the reload button to swap firing modes, allowing you to apply the same Void debuff that was leached.

There is no Catalyst for Collection Obligation at this time, and it is uncertain if one may be added to the Exotic Pulse Rifle in the future.

The ability to leech Void debuffs from enemies and use them to inflict those same debuffs makes this weapon quite the tactical advantage.

You will of course want to use it with the Void subclass to better control which debuffs you leech since it only takes Void types.

Combining Collective Obligation’s ability to inflict debuffs can make it quite deadly when paired with other weapons or when used with abilities.